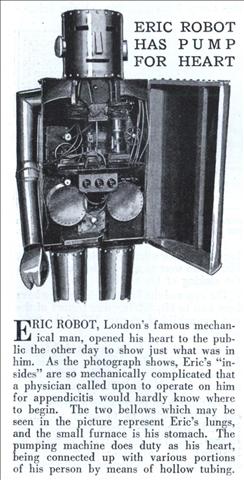 ERIC ROBOT HAS PUMP FOR HEART

ERIC ROBOT, London’s famous mechanical man, opened his heart to the public the other day to show just what was in him. As the photograph shows, Eric’s “in-sides” are so mechanically complicated that a physician called upon to operate on him for appendicitis would hardly know where to begin. The two bellows which may be seen in the picture represent Eric’s lungs, and the small furnace is his stomach. The pumping machine does duty as his heart, being connected up with various portions of his person by means of hollow tubing.