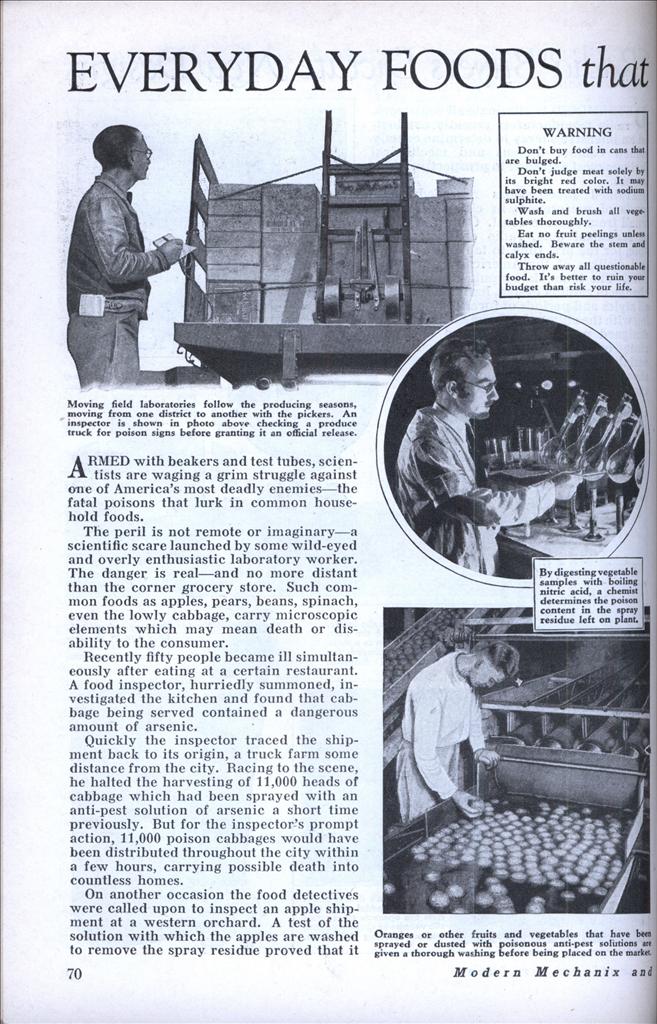 Poison death lurks in common table fruits and vegetables. Here is the story of how science battles to safeguard our foodstuffs.

ARMED with beakers and test tubes, scientists are waging a grim struggle against one of America’s most deadly enemies—the fatal poisons that lurk in common household foods.

The peril is not remote or imaginary—a scientific scare launched by some wild-eyed and overly enthusiastic laboratory worker. The danger is real—and no more distant than the corner grocery store. Such common foods as apples, pears, beans, spinach, even the lowly cabbage, carry microscopic elements which may mean death or disability to the consumer.

Recently fifty people became ill simultaneously after eating at a certain restaurant. A food inspector, hurriedly summoned, investigated the kitchen and found that cabbage being served contained a dangerous amount of arsenic.

Quickly the inspector traced the shipment back to its origin, a truck farm some distance from the city. Racing to the scene, he halted the harvesting of 11,000 heads of cabbage which had been sprayed with an anti-pest solution of arsenic a short time previously. But for the inspector’s prompt action, 11,000 poison cabbages would have been distributed throughout the city within

On another occasion the food detectives were called upon to inspect an apple shipment at a western orchard. A test of the solution with which the apples are washed to remove the spray residue proved that it

was too weak for safety. Some of the poison spray still clung to the fruit. A hasty checkup revealed that one load of the poison apples was already speeding toward market.

Warning messages hummed over the wires to agents in neighboring counties. Armed with descriptions of the missing truck, inspectors patrolled the highway, intercepted the deadly load and returned it to the ranch for reconditioning.

Last year more than sixty million pounds of arsenic preparations were used to fight pests on growing crops in the United States. Only ceaseless war against poison foods prevents the loss of many lives. To safeguard the consumer, moving field laboratories follow the producing seasons in California, moving from one area to another as pickers begin work. Each morning samples of the produce are chemically tested. If poison is found, shipments are promptly stopped. Often whole loads of beans, apples and pears are unloaded and mechanically

scrubbed before the inspectors release them.

The arsenic-carrying foodstuffs are not always fatal to the consumer. Generally the actual poison content is small, resulting in illness from which the patient recovers. More to be feared are certain organisms found in spoiled food which has been canned—the deadly botulinus bacillus which brings death three times out of five.

War on the botulinus organism began with dramatic swiftness in 1919, following an epidemic of poisoning throughout the United States. Pickled ripe olives served at a banquet in Canton, Ohio, had taken a toll of seven lives. Investigation revealed -living botulinus organisms in the brine in which the olives had been packed. The Canton deaths were followed by an alarming series of poisonings over the entire country—all traced to the same olive shipment.

Laboratory experiments were hastily launched to propagate the organism for study. Spores of the bacillus, harvested from young cultures, were weighed and counted. Crop production methods were studied, compulsory inspection inaugurated and the death epidemic was halted.

Don’t buy food in cans that are bulged.

Don’t judge meat solely by its bright red color. It may have been treated with sodium sulphite.

Wash and brush all vegetables thoroughly.

Eat no fruit peelings unless washed. Beware the stem and calyx ends.

Throw away all questionable food. It’s better to ruin you budget than risk your life.