Cortisone addiction is no allegory.  The movie of Bigger Than Life was based on a 1955 New Yorker article titled “Ten Feet Tall” written by Berton Roueché who also wrote the 1980 book Medical Detectives which became one of the inspirations for the House TV series. 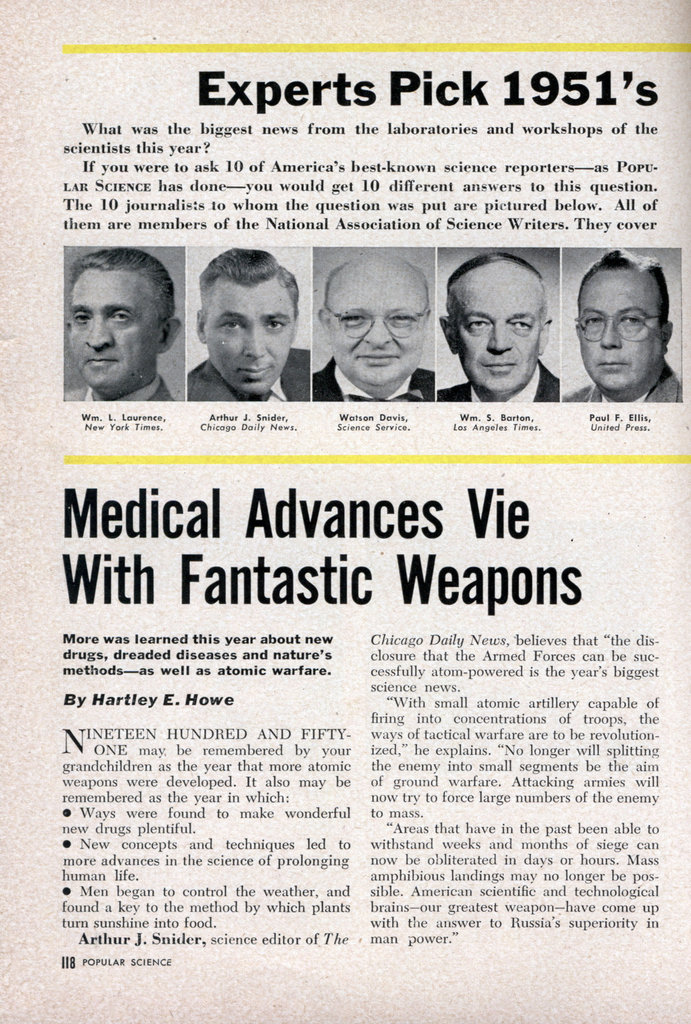 What was the biggest news from the laboratories and workshops of the scientists this year?

If you were to ask 10 of America’s best-known science reporters—as Popular Science has done—you would get 10 different answers to this question.

The 10 journalists to whom the question was put are pictured below. All of them are members of the National Association of Science Writers. They cover science news the way Washington correspondents cover politics and police reporters cover crime. They have spent the past year interviewing scientists, attending scientific meetings and studying scientific reports to obtain the news of science for the readers of the newspapers, press associations and magazines that they represent. The stories that they consider this year’s biggest news are summarized in the article that follows.

• New concepts and techniques led to more advances in the science of prolonging human life.

• Men began to control the weather, and found a key to the method by which plants turn sunshine into food.

Arthur J. Snider, science editor of The Chicago Daily News, believes that “the disclosure that the Armed Forces can be successfully atom-powered is the year’s biggest science news.

“With small atomic artillery capable of firing into concentrations of troops, the ways of tactical warfare are to be revolutionized,” he explains. “No longer will splitting the enemy into small segments be the aim of ground warfare. Attacking armies will now try to force large numbers of the enemy to mass.

“Areas that have in the past been able to withstand weeks and months of siege can now be obliterated in days or hours. Mass amphibious landings may no longer be possible. American scientific and technological brains—our greatest weapon—have come up with the answer to Russia’s superiority in man power.”

Victor Cohu, of The Minneapolis Tribune and Minneapolis Star, says “the biggest science story of the year was Senator Brien McMahon’s recommendation that the United States increase six-fold its annual expenditure on atomic weapons.”

William L. Laurence, of The New York Times, was the first science writer to see an atom bomb go off, but he differs with those who consider atomic developments the biggest science news of 1951.

He considers the synthesis of the basic steroid from which cortisone can now be made the big story this year. Cortisone (PS, June ’51, p. 97) is one of the hormones which have produced remarkable results in treating arthritis and other diseases. This year a team of chemists at Harvard, led by Prof. Robert B. Woodward, developed a way of making a basic steroid from a simple coal-tar derivative. At almost the same time, another Harvard research team found a way to close a missing link in the chain of processes between the steroid and cortisone.

Paul F. Ellis, science editor of the United Press, considers another story about cortisone the year’s biggest science news. This was the synthesis of cortisone from a wild Mexican yam by a group of Mexican scientists led by Dr. George Rosenkranz.

“This,” says Ellis, “may well mean that the wonder hormone drug will eventually be as cheap as an aspirin tablet.”

And he adds: “The Mexican scientists believe that the new synthesis will enable science to make other hormone substances that mav have more value than cortisone, or possibly a better cortisone.”

Nate Haseltine, of The Washington Post, was most impressed by a new basic theory about arthritis. Developed by a research team headed by Dr. Thomas Mc-Pherson Brown of George Washington University, this concept is based upon the discovery of living organisms called “L-organisms.”

Dr. Brown describes L-organisms as half virus and half bacteria. They live inside the cells of the body. There they multiply and move out into the spaces between the cells as antigens. These antigens provoke the defense forces of the human body, the anti- bodies, into action. The war between the two, according to the theory, creates a state of hypersensitivity, especially in the joints. This is the cause of the agonizing pains, swelling and crippling effects of arthritis. Cortisone, Dr. Brown believes, acts as a “blocking agent,” keeping the antigens and the antibodies apart so that the reaction between them does not take place.

“This theory provides the first explanation of why cortisone and ACTH work only temporarily in relieving arthritic pains and crippling,” Haseltine says. “If the concept proves out, it might also explain similar causes of such baffling diseases as cancer, polio, muscular dystrophy and many other maladies.”

Alton L. Blakeslee, science reporter for the Associated Press, calls attention to the discovery of substances in mother’s milk that destroy viruses of many diseases. A pair of chemicals turned up by Dr. Albert Sabin of the University of Cincinnati act as antibodies against the viruses of encephalitis, yellow fever, dengue fever and cold sores. Dr. Sabin had previously found in milk an antibody against polio. The chemicals are found only at intervals, and only in certain mothers. Whether the antibodies protect babies against disease, is still to be discovered.

“I like this story because here is a first-class scientific mystery, a new line of investigation into nature’s secrets,” says Blakeslee. “The work is potentially of great practical importance—or it may be just the discovery of some scientific curiosities. As with other basic research, no judgment can be made right now whether these discoveries will prove useful.”

Gobind Beliari Lai, science editor of The American Weekly and Hearst Newspapers, chose a quite different kind of medical story. “Entitled Brain Fever Treatment ” says Lai, “it related that severe meningitis with pus, caused by certain types of bacterial organisms which did not respond to most known treatments, was cleared up in a number of cases by the use of the antibiotic called bacitracin.”

When the parents of 10-month-old Michael Zielinski, dying of meningitis in a Schenectady hospital, read this story in The American Weekly, they insisted that Michael be given bacitracin. The baby was completely cured.

“Now these folks believe in science stories,” Lai declares. “That is important. Maybe when the two-and-a-half billion earth inhabitants become one percent familiar with the usefulness of a scientific approach to the problems of man, the cure for war and tyranny will be somewhat near.”

William S. Barton, science editor of the Los Angeles Times, found the year’s big news in another aspect of medical research. He nominates an improvement in a test for cancer that enables it to be done with common materials. “I know of no story more important than one that indicates that it soon will be possible to diagnose cancer at such an early stage that cures are almost certain to be effected,” Barton explains.

The test is the result of many years of research by Dr. Harry S. Penn, a practicing physician. The test originally required an extract made from the livers of persons who had just died of cancer. Now Dr. Penn has found that it can be prepared synthetically from a common organic substance. This may bring the cost down to 25 cents a test, cheap enough for it to be used to screen whole communities at a time.

George A. W. Boehm, Newsweek’s science editor, believes that the attempt to control weather in large parts of the West by cloud seeding was this year’s biggest science news. “Its consequences,” he maintains, “are sure to be even greater than those of the atom bomb. Control the atom and you can win battles; control the weather, and you can have the whole world at your mercy.”

Leading figure in the commercial rain-making was Dr. Irving P. Krick, of Denver. His contracts for the summer of 1951 covered 436,800 square miles.

The operations of all the weather makers, including Krick, are highly controversial. Do they work? If so, should they be licensed and controlled? Were rain makers responsible for the disastrous Kansas floods? “It may take years to decide whether Krick should be drawn and quartered or canonized,” says Boehm, “but despite its lack of a conclusive ending, I nominate the story of his enormous gamble as the biggest science story since the atom bomb burst over Hiroshima.”

Watson Davis, director of Science Service, also feels that his choice may outweigh the atom bomb in long-term importance. It deals with the mysterious way in which plants are able to use their green leaves to transform sunlight into food.

A new theory to explain this was announced this year by Dr. Dean Bulk, of the U. S. National Institutes of Health, and Otto Warburg, Nobel prize winner. Crux of the problem is that it takes at least three units of energy to manufacture one molecule of carbohydrate, the food the plant makes from sunlight. Yet sunlight supplies only one unit of energy at a time. Now the researchers have found that each unit as received activates an unknown substance in the plant to start a chemical reaction. Three reactions produce a carbohydrate molecule.

“The meaning of this discovery may prove to be as significant as the fissioning of uranium discovered in 1939,” Davis believes, and he adds: “Possibly a sort of artificial green plant, capable of factory use, can be developed to apply industrially the capture of the plentiful sunshine. If this can be done, economically, the world would be freed of its dependence for energy upon coal, oil, gas, wood and other fuels and synthetic food should be just around the corner.”