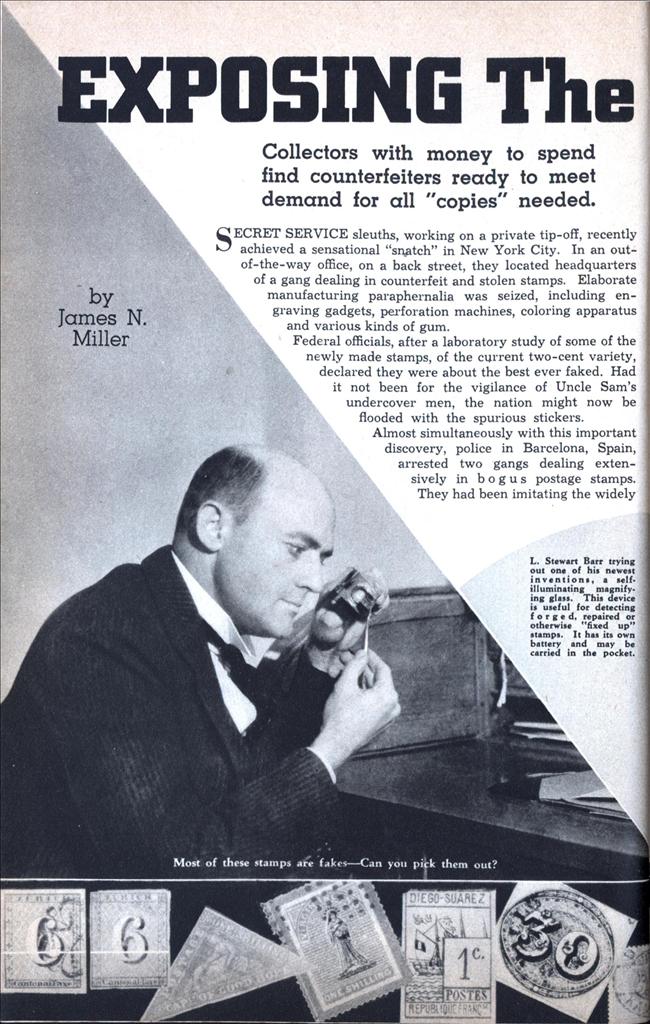 Collectors with money to spend find counterfeiters ready to meet demand for all “copies” needed.

SECRET SERVICE sleuths, working on a private tip-off, recently achieved a sensational “snatch” in New York City. In an out-of-the-way office, on a back street, they located headquarters of a gang dealing in counterfeit and stolen stamps. Elaborate manufacturing paraphernalia was seized, including engraving gadgets, perforation machines, coloring apparatus and various kinds of gum.

Federal officials, after a laboratory study of some of the newly made stamps, of the current two-cent variety, declared they were about the best ever faked. Had it not been for the vigilance of Uncle Sam’s undercover men, the nation might now be flooded with the spurious stickers.

Almost simultaneously with this important discovery, police in Barcelona, Spain, arrested two gangs dealing extensively in bogus postage stamps. They had been imitating the widely used Spanish 30-centime issue so adeptly that the government found it necessary to withdraw the real stamps from use and to manufacture, in their place, a new kind of engraved variety.

Just how widespread is the counterfeiting of stamps, not only of the “rare” issues but of the current varieties? And what protection, if any, has the average collector against illegal imitations? These questions may now be answered, for readers of Modern Mechanix by two outstanding world authorities: H. A. Robinette, Washington dealer, and L. Stewart Barr, collector and resident of the nation’s capital. In days gone by, dealers did not want to own a single counterfeit. But Mr. Robinette has developed his collection of bogus varieties to one of the largest in the world, so he can have a measuring stick for good and bad stamps offered for sale either to himself or his friends.

As for Mr. Barr, he has spent a considerable portion of his past twelve years of extensive travel in studying counterfeit stamps in every section of the world. Today he probably knows as much about bogus European varieties as any American.

First of all, Mr. Robinette points out a revolutionary development in philatelic circles: Not long ago the Treasury Department decided that it is legal to illustrate the stamps of dead governments. In other words, the postal issues of all defunct nations or states may now be reproduced without risk of conflict with the law.

“Approximately 130 stamp-issuing nations and colonies of the past are affected, including: the German Empire, the Russian Empire, the former kingdom of Hungary, Portugal and Spain, the Spanish regimes in Cuba and the Philippines prior to 1898, and the erstwhile empires of Brazil and Mexico.

“As most collectors already know, there is a strict American law forbidding the illustrating of all stamps of present-day national governments. Certainly the ruling is a good one. It has prevented the manufacture of counterfeits which would have flooded the philatelic markets and hurt philately as a recreation, a cultural study and a business.

“However, now that the statute has been liberalized by the Treasury Department, collectors will have to be on guard against frauds and fakes as never before in a generation.”

Japanese stamps are counterfeited most prolifically of any in the world, Mr. Robinette says. Particularly is this true of the early issues, of the period between 1871 and 1875, when most of the Nipponese stamps were ornamented with dragons and chrysanthemums. Today the finest genuine varieties of this group catalogue up to $100 apiece.

Numerically speaking, Swiss counterfeits run a pretty close second to the Japanese fakes, claims Robinette. Next in order come stamps of the early Italian and German states. These nations, in case you don’t recall offhand, once were divided into various states—before the turn of the century—and stamps in those days were issued usually by the states and not by the national government. Saxony, as a German state, for instance, started issuing stamps about 1860 and most of the fine counterfeits of Saxony issues, in the world today, were made between 1860 and 1870.

What American stamps have been counterfeited mostly? The 1894 and 1917 two-cent varieties, Mr. Robinette says. Both of these illegal issues were made specifically to defraud the United States government, rather than to bamboozle collectors. Secret Service sleuths located both agencies making these fakes and quickly put them out of business.

The bogus ’94 two-cent stamp was red in color with a profile of George Washington on its face. Thousands were foisted upon the unsuspecting American people, Mr. Robinette recalls. Careful study of some of these fakes convinces him that they were imitated first by means of a clever photographic process and later engraved. This was likewise the case, he believes, with the 1917 two-cent counterfeits.

Confederate stamps have been widely imitated, Mr. Robinette says. “The best counterfeit I know about is the little five-cent blue Jefferson, issue of 1862. Genuine copies today catalogue at only 30 cents. The surest way for the average collector to identify the fraudulent variety is by comparing the sizes of the real stamp and the suspected one. The fake, in nine cases out of ten, will prove to be a trifle smaller.”

Oddly enough, the largest-scale counterfeiting business Mr. Robinette ever heard about was conducted in a semi-legitimate way. In other words, the “big shot” involved admitted, yes, even advertised, that he was making fakes, but said he was doing so because many collectors liked to include a number of good fakes in their collections. He was a Swiss with headquarters in Berne. He had the finest types of stamp-making equipment, including printing presses, perforating machines, color processes and all varieties of gum. He was almost a genius in his line and claimed that he could imitate practically every one of the early European stamps. When did he operate? Way back in the period roughly between 1870 and 1880.

This amazing individual made other peculiar assertions. He claimed he manufactured “phonies” mainly for the sheer fun of it and made very little profit. However, he did a tremendous business and sold to thousands of people all over the world. Always he insisted he never sold a single counterfeit with the deliberate intent to deceive. Maybe not. But scores of shyster dealers obtained some of his finest specimens, directly or indirectly, and cashed in handsomely on them. Today no one seems to know whether or not Swiss authorities ever actually clamped down on his activities.

Do you know what a surcharge is? Even the rankest novice collector can tell you. In stamp circles it usually means that the official manufacturing agency changes the country of issue by means of an “overprint,” which is some fairly simple identifying mark such as the marking of the face of the stamp with a name or a numeral.

Another form of surcharge involves, in similar fashion, a change in the regulation postal rate. This might mean, for instance, a 2-1/2-cent overprint on a 5-cent stamp. On the other hand, a surcharge might involve a change in the type of postal service. There are, for example, special surcharges used for making special deliveries out of ordinary stamps, or for some particular revenue purpose.

There’s a tremendous field in counterfeit surcharges, according to Mr. Robinette, of the so-called French Colonial “provisionals.” The fakers make a practice of buying, at extremely low rates, a number of the genuine French stamps, which are fairly common, by the way; whereupon they imitate the rare surcharges. For the expert this is easy, since the early surcharges were printed on the face of a stamp in very crude fashion, or else merely stamped on by hand.

All the French colonial governments surcharge their stamps by putting the word Obock on a freshly made sticker. The counterfeiters do the same thing, Robinette says, and oftentimes it’s next to impossible to detect the fraud, so expert are the fakers in their illegal art.

Many of the early French Colonials have a high catalogue value today, notably the so-called Martinque and Madagascar varieties. For instance, the famous “Majungo” issue of Madagascar—1895 to 1896—list at from $50 to $600 apiece. Their surcharges have been widely and beautifully imitated.

Mr. Robinette has noted many fakes of the famous 1834 issue of the so-called “Bull’s Eye” of Brazil. These are the first general issue stamps known in the Western Hemisphere. They are engraved stamps, are black in color and have enormous letters on their faces, which fact accounts for their unusual nickname. “Bull’s Eyes” were made in three values only: 30, 60 and 90 reis. Some of them today rate a high catalogue value. The 90-cent ones list at $150 uncancelled, and $40 cancelled. Most of the other Brazil varieties are considerably cheaper on the collector’s market.

Can an expert dealer be fooled? Not very easily, Mr. Robinette claims. He could be most readily taken in, he admits, with an especially fine imitation of the so-called No. 1 Saxony, an early German Colonial. This is a lovely stamp, red in color, bearing the large numeral 3 in a square. There are innumerable fakes of this on the market, printed almost precisely like the original. The best test for determining them is to note carefully the exact structure of the corner ornaments. There are numerous slight distinctions between the real and the false which the eye can be trained to detect very quickly.

At first thought the repairing of stamps might not be regarded as a crooked procedure. Nevertheless it is being done on a large scale, and with a deliberate intent to deceive, particularly in Europe, Mr. L. Stewart Barr says. In France such sharpers are especially clever and in Austria there are at least 20 specialists who do nothing but “fix up” stamps. Mr. Barr explains: “As is well known, certain rare stamps in perfect condition will command enormous prices. But if they happen to have a slight tear or thin spot their worth will skid down to perhaps one-tenth of the catalogue value. No wonder, then, that the best of the repair crooks do a flourishing business. They maintain a regular working arrangement with shyster dealers.

“In every sense of the term the repair charlatans are real artists. They know the composition of paper to a precise degree. In the case of a job where a hole or thin spot is to be disguised they are able to add a tiny bit of paper in such fashion that the unaided eye finds it next to impossible to detect the fraud. A true stamp connoisseur, however, can locate the deception immediately by simply dipping the suspected stamp in benzine, whereupon in most cases the added portion will stand out in sharp delineation from the main body of the stamp.

“Similar results may be achieved by carefully examining the stamp under a fine quartz lens. In such case the observer should experience no trouble in distinguishing the tiny outline of the foreign paper added during the repair process.”

Despite all the philatelic fakes now on the American collector’s market, Messrs. Robinette and Barr conclude: “To combat successfully most of the illicit maneuvers of the stamp racketeers, the average collector needs a sincere love of collecting, an alert eye and a willingness to work hard at his chosen hobby.”