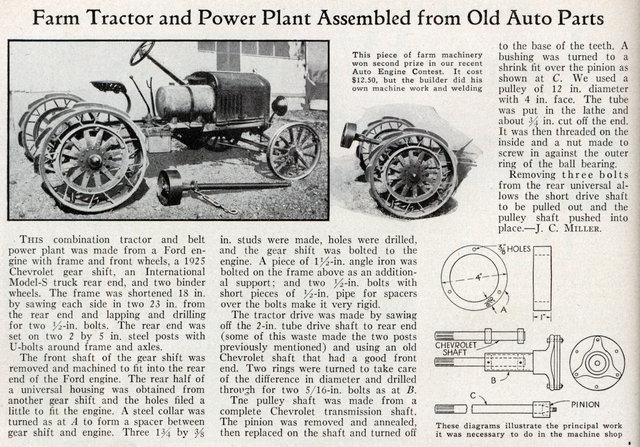 This combination tractor and belt power plant was made from a Ford engine with frame and front wheels, a 1925 Chevrolet gear shift, an International Model-S truck rear end, and two binder wheels. The frame was shortened 18 in. by sawing each side in two 23 in. from the rear end and lapping and drilling for two 1/2-in’. bolts. The rear end was set on two 2 by 5 in. steel posts with U-bolts around frame and axles.

The front shaft of the gear shift was removed and machined to fit into the rear end of the Ford engine. The rear half of a universal housing was obtained from another gear shift and the holes filed a little to fit the engine. A steel collar was turned as at A to form a spacer between gear shift and engine. Three 1-3/4 by 3/8 in. studs were made, holes were drilled, and the gear shift was bolted to the engine. A piece of 1-1/2 in.. angle iron was bolted on the frame above as an additional support; and two 1/2-in.. bolts with short pieces of 1/2-in. pipe for spacers over the bolts make it very rigid.

The tractor drive was made by sawing off the 2-in. tube drive shaft to rear end (some of this waste made the two posts previously mentioned) and using an old Chevrolet shaft that had a good front end. Two rings were turned to take care of the difference in diameter and drilled through for two 5/16-in. bolts as at B.

The pulley shaft was made from a complete Chevrolet transmission shaft. The pinion was removed and annealed, then replaced on the shaft and turned off to the base of the teeth. A bushing was turned to a shrink fit over the pinion as shown at C. We used a pulley of 12 in. diameter with 4 in. face. The tube was put in the lathe and about 3/4 in. cut off the end. It was then threaded on the inside and a nut made to screw in against the outer ring of the ball bearing.

Removing three bolts from the rear universal allows the short drive shaft to be pulled out and the pulley shaft pushed into place.