This is one of those articles where they happen to get it exactly right. How many people alive today have ever even seen a mechanical television? The CRT is probably one of the more important inventions of the last century. It made TV and computer displays practical and economical. It was even used for data storage.

Kids growing up today will never learn the joy and muscular-skeletal pain one received simply by attempting to lift a 30″ TV on to a table. 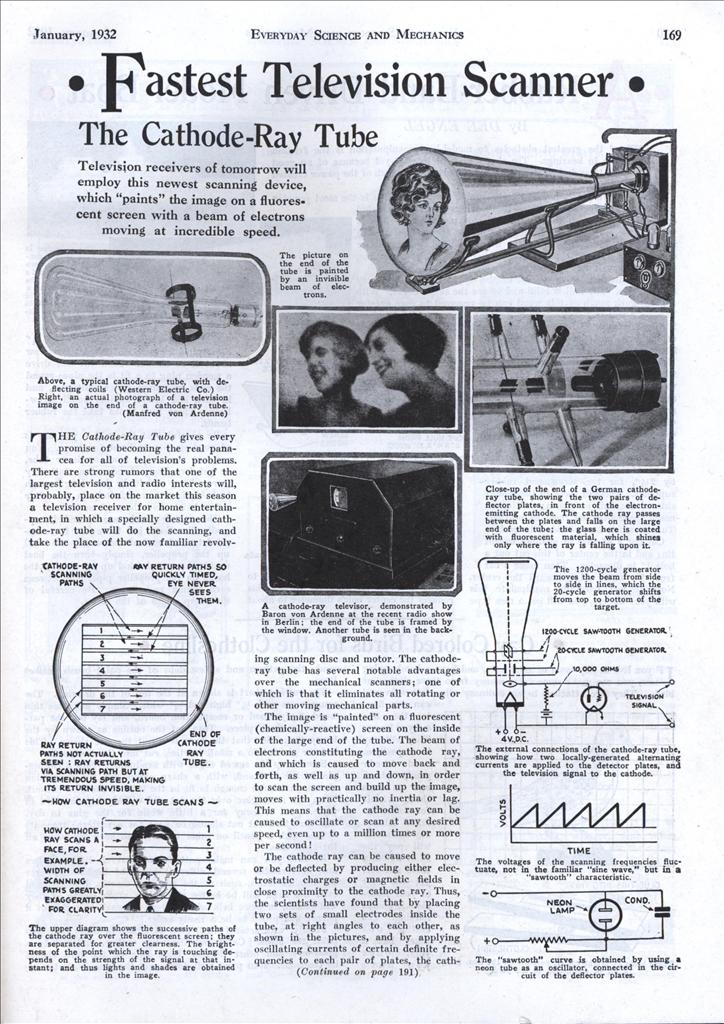 Television receivers of tomorrow will employ this newest scanning device, which “paints” the image on a fluorescent screen with a beam of electrons moving at incredible speed.

THE Cathode-Ray Tube gives every promise of becoming the real panacea for all of television’s problems. There are strong rumors that one of the largest television and radio interests will, probably, place on the market this season a television receiver for home entertainment, in which a specially designed cathode-ray tube will do the scanning, and take the place of the now familiar revolving scanning disc and motor. The cathode-ray tube has several notable advantages over the mechanical scanners; one of which is that it eliminates all rotating or other moving mechanical parts.

The image is “painted” on a fluorescent (chemically-reactive) screen on the inside of the large end of the tube. The beam of electrons constituting the cathode ray, and which is caused to move back and forth, as well as up and down, in order to scan the screen and build up the image, moves with practically no inertia or lag. This means that the cathode ray can be caused to oscillate or scan at any desired speed, even up to a million times or more per second!

The cathode ray can be caused to move or be deflected by producing either electrostatic charges or magnetic fields in close proximity to the cathode ray. Thus, the scientists have found that by placing two sets of small electrodes inside the tube, at right angles to each other, as shown in the pictures, and by applying oscillating currents of certain definite frequencies to each pair of plates, the cath- ode ray may be caused to scan back and forth at say 1200 times per second, and up and down at the rate of 20 times per second. With this, it is possible to reconstruct a television image for us, as now broadcast from television stations.

One New York City genius has built up suitable neon tube oscillators, which provide oscillating currents of the required frequency, so that the cathode ray (which is invisible in itself, but creates a bright spot wherever it strikes the fluorescent screen) is caused to move back and forth, and up and down, as explained previously. The strength of the cathode ray is continuously modulated or varied by the incoming television signals from the transmitting station. As the cathode ray varies in strength, so likewise does the luminous path on the fluorescent screen vary in brightness; and so the lights and shadows of the television image are built up.

The accompanying diagrams, showing how a face, for example, is scanned in “paths” or lines, one after the other, will help to make clear just how the image is built up on the end of the cathode ray. Secondly, we have to keep in mind the fact that this “back and forth” movement of the cathode ray as well as its progressive vertical oscillating motion, is performed so quickly that the human eye sees only the “finished image” or picture.

It is possible also to regulate the frequency of the oscillators supplying the control currents, so that the scanning hands or paths may slightly overlap and thus produce a very smooth-appearing image. The reason why the “saw-tooth” waveform is required in the oscillator control currents, applied to the two pair of plates inside the tube, is that the cathode ray must be carried across to “paint” its path on the fluorescent screen; it must then return instantly to its starting point to “paint” the next scanning path. In other words, if the cathode ray took 1000th of a second to move across one scanning path, it should only require one ten-thousandth of a second, for example, to return to its starting point and begin scanning across the second path, and so on.

Numerous articles on cathode ray tubes for television scanning which every student of television should read, have appeared in past issues of Television News; notably the July-August 1931 issue and the November-December 1931 issue.