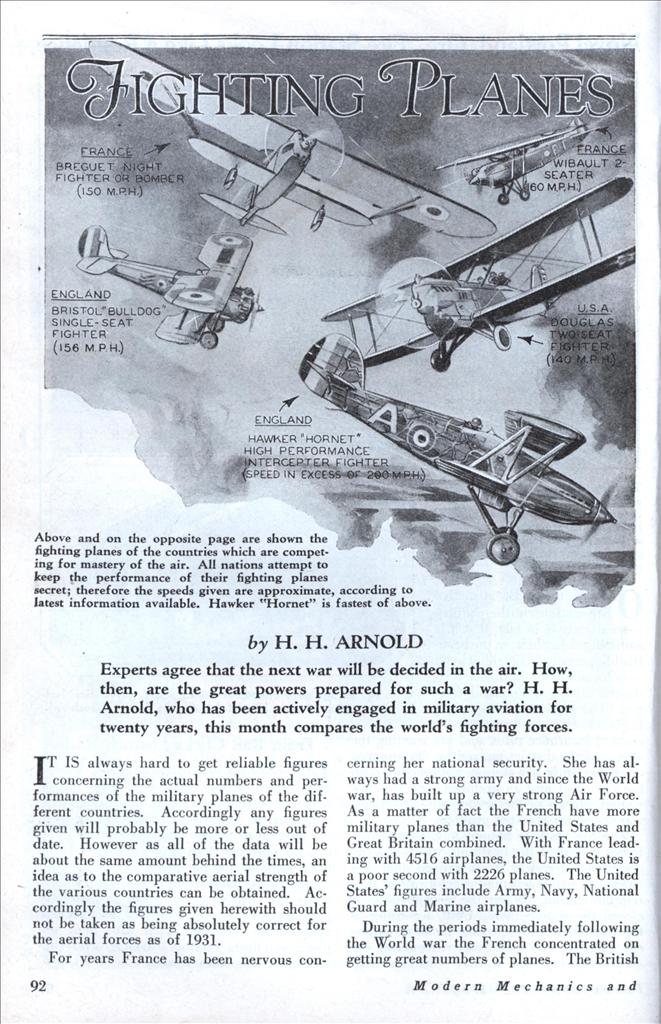 Fighting Planes of the World

Experts agree that the next war will be decided in the air. How, then, are the great powers prepared for such a war? H. H. Arnold, who has been actively engaged in military aviation for twenty years, this month compares the world’s fighting forces.

IT IS always hard to get reliable figures concerning the actual numbers and performances of the military planes of the different countries. Accordingly any figures given will probably be more or less out of date. However as all of the data will be about the same amount behind the times, an idea as to the comparative aerial strength of the various countries can be obtained. Accordingly the figures given herewith should not be taken as being absolutely correct for the aerial forces as of 1931.

For years France has been nervous concerning her national security. She has always had a strong army and since the World war, has built up a very strong Air Force. As a matter of fact the French have more military planes than the United States and Great Britain combined. With France leading with 4516 airplanes, the United States is a poor second with 2226 planes. The United States’ figures include Army, Navy, National Guard and Marine airplanes.

During the periods immediately following the World war the French concentrated on getting great numbers of planes. The British during the same period built only enough planes to carry on with. They figured that the next war could not come along for ten or more years and concentrated on permanent structures, development of new types of planes and engines and building up of airdromes where they would play important parts in national defense. During recent years the British have been bringing out airplanes with far better performances than those of any other country, though numerically inferior to France and the United States.

It is but recently that the Italians have taken up aviation with much constructive vigor. They are gradually building up a strong airforce with planes having good performance. The recent flights across the South Atlantic show the improvement of military types. In numbers the Italians are fourth but they have greatly increased their production. Our five year program has made it possible for the United States to stand second in point of numbers. In performance we rank second also.

Each country seems to be influenced in its aircraft development by its national characteristics, geographical location, or topographical situation. France, surrounded by prospective enemies, has a large air force which it always keeps up in numbers. England, surrounded by water, has built up a highly efficient aviation outfit. However, in order to take care of its many outposts in the colonies, it has built up large cargo planes capable of carrying heavy loads, long distances. Italy has spent much time on water planes. Poland had support from the French in building up its air units and accordingly uses many French planes. The Japanese are completely isolated and do not seem to have taken much advantage of designs from other nations. Their planes seem to have lines all their own. In the United States we have long distances to cover in going from one place to another. Accordingly we have planes with large gas tanks and at the same time planes which give performances well above average.

It should be noted that when any one of the nations find out a new wrinkle or create a new design which gives better performance, it does not take the others long to find it out. Accordingly there will never be much difference between the climb, speed, or cruising range of the planes of the same type.