Modern Mechanix
Issue: Jul, 1935
Posted in: General
No Comments on Figures Prove You Lose $300 If Letter Chain Is Unbroken (Jul, 1935) 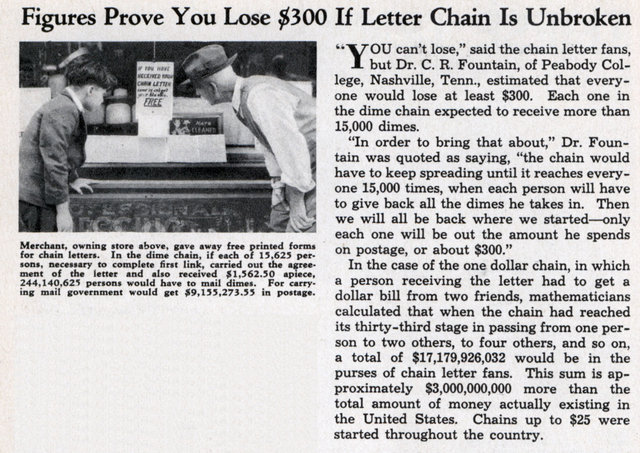 Figures Prove You Lose $300 If Letter Chain Is Unbroken

You can’t lose,” said the chain letter fans, I but Dr. C. R. Fountain, of Peabody College, Nashville, Tenn., estimated that everyone would lose at least $300. Each one in the dime chain expected to receive more than 15,000 dimes.

“In order to bring that about,” Dr. Fountain was quoted as saying, “the chain would have to keep spreading until it reaches everyone 15,000 times, when each person will have to give back all the dimes he takes in. Then we will all be back where we startedâ€”only each one will be out the amount he spends on postage, or about $300.”

In the case of the one dollar chain, in which a person receiving the letter had to get a dollar bill from two friends, mathematicians calculated that when the chain had reached its thirty-third stage in passing from one person to two others, to four others, and so on, a total of $17,179,926,032 would be in the purses of chain letter fans. This sum is approximately $3,000,000,000 more than the total amount of money actually existing in the United States. Chains up to $25 were started throughout the country.