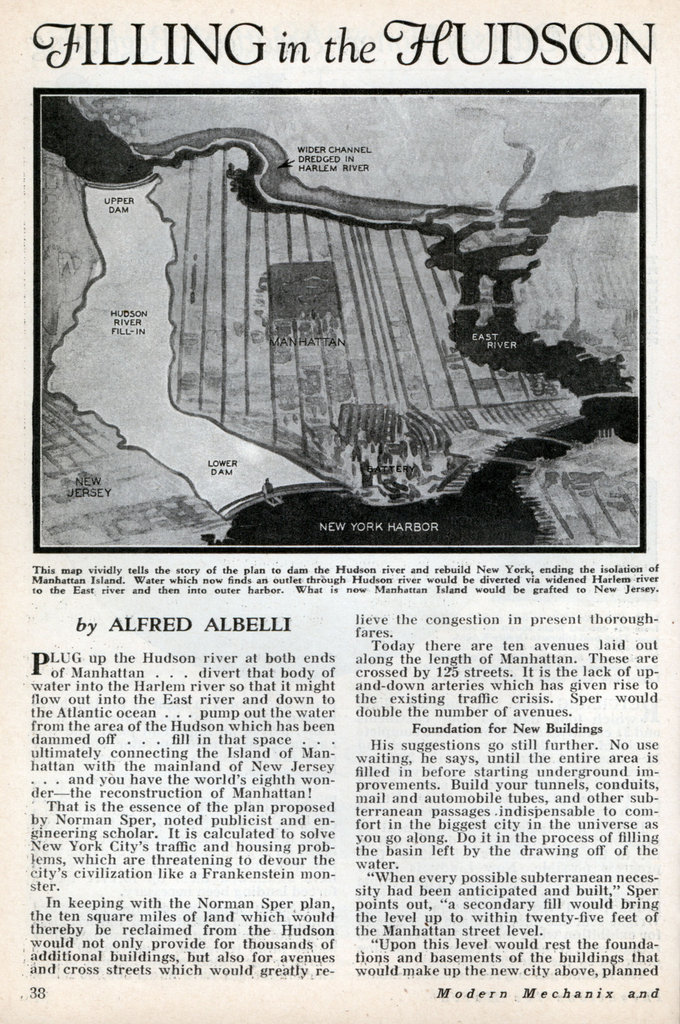 Filling in the Hudson to Rebuild New York

PLUG up the Hudson river at both ends of Manhattan . . . divert that body of water into the Harlem river so that it might flow out into the East river and down to the Atlantic ocean . . . pump out the water from the area of the Hudson which has been dammed off … fill in that space . . . ultimately connecting the Island of Manhattan with the mainland of New Jersey . . . and you have the world’s eighth wonderâ€”the reconstruction of Manhattan!

That is the essence of the plan proposed by Norman Sper, noted publicist and engineering scholar. It is calculated to solve New York City’s traffic and housing problems, which are threatening to devour the city’s civilization like a Frankenstein monster.

In keeping with the Norman Sper plan, the ten square miles of land which would thereby be reclaimed from the Hudson would not only provide for thousands of additional buildings, but also for avenues and cross streets which would greatly relieve the congestion in present thoroughfares.

Today there are ten avenues laid out along the length of Manhattan. These are crossed by 125 streets. It is the lack of up-and-down arteries which has given rise to the existing traffic crisis. Sper would double the number of avenues.

His suggestions go still further. No use waiting, he says, until the entire area is filled in before starting underground improvements. Build your tunnels, conduits, mail and automobile tubes, and other subterranean passages indispensable to comfort in the biggest city in the universe as you go along. Do it in the process of filling the basin left by the drawing off of the water.

“When every possible subterranean necessity had been anticipated and built,” Sper points out, “a secondary fill would bring the level up to within twenty-five feet of the Manhattan street level.

“Upon this level would rest the foundations and basements of the buildings that would make up the new city above, planned

for fresh air, sunshine and beauty. Thus, below the street level would be a subterranean system of streets that would serve a double purpose. All heavy trucking would be confined to it, but primarily it would serve as a great military defense against gas attack in case of war, for in it would be room for practically the entire population of the city.

“If the Russians had the vision and the courage not only to build huge cities from the ground up, but to practically rebuild an empire, surely America should not be frightened at a project as big as this.”

It would cost about one billion dollars to build, he figures.

If you think such a project is beyond the abilities of modern engineers, asserts Mr. Sper, think of these achievements:

The seemingly invincible Colorado river has been diverted to build the biggest dam in the world â€” Boulder dam. Fifty-foot tunnels were hewn out of the stubborn rock on either side of the river to make way for diversion of the water, which, in flood seasons, becomes a raging torrent.

Look at the engineering wonders accomplished in construction of bridges. The two bridges now being built across San Francisco bay, one over the Golden Gate and the other from San Francisco to Oakland, defied problems which seemed unsurmountable even a few years ago.

Consider the success of Colonel George Goethels in finishing the Panama Canal and opening it to traffic of the world’s largest ocean going vessels after others had failed.

Engineers uniformly agree that there are very few problems which can successfully defy the determination of civilization to conquer.

As in many other instances, the project to dam the Hudson river and reclaim the river bed to provide New York with an additional ten square miles of land, would depend largely upon the ability of the government to finance such a project.

In the past, individual projects were considered in terms of millions of dollars and only recently in terms of hundreds of millions. Now comes Mr. Sper with a plan which must be considered in the light of a billion dollar expenditure. This single project would cost within approximately one-thirtieth of the total of the public debt of the United States government as it now stands.

While such a figure is enough to stagger an ordinary financial mind, engineers point to the fact that the project would provide an immediate income of almost unbelievable dimensions. For instance, the land reclaimed could be sold outright or leased for 99-year periods to private concerns or to individuals and because of the desirability of the location, would bring extremely high rentals or sales prices. Then, too, the franchises for electric and telegraph conduits, steam heat tubes, street car and railway tubes would bring in millions of dollars annually.

An annual income of a hundred million dollars a year would represent a return of ten per cent on the investment of a billion dollars and engineering experts all agree that this would be only a trifle of the amount that could be realized from this great project.

Thus, it is easy to comprehend the advisability of the Hudson river reclamation project from both an engineering and financial standpoint.

As a special investigator for Modern Mechanix and Inventions, I consulted with several eminent authorities in the field of engineering.

“I have conferred with several marine engineers on the plan you have told me about. After several hours of spirited discussionâ€”for we actually became very much interested in the various phases presented â€” it was our unanimous conclusion that the project is one which comes within the realm of possibility and could actually be accomplished. There were a multitude of problems, perhaps I should say obstacles, which cropped up in our discussion. We gave each one full consideration.

“Soundings and borings have disclosed that the bed of the Hudson river is rock with a silt, or mud covering. The foundation work in connection with the Holland Tunnel, the Pennsylvania Railroad Tunnel and the Washington Bridge showed that the Hudson had a rock bottom. The Manhattan rock structure goes under the Hudson river and proceeds west beyond the hills of Hoboken.”

“I recall some years ago a man named Thompson had a plan to fill in the Harlem river and eliminate the East river entirely. So, since I was in the midst of the discussion on the Thompson plan, I have a fairly good idea of what the Hudson job involves.

“Furthermore, it was under my supervision that we made 135 acres of land along the Hudson river, filling it in from west Seventy-Second

Street up to the Harlem River Canal, which is near Two Hundred and Twelfth Street. We used fill derived from subway construction work. “No, I wouldn’t for a moment say that the Sper plan is an impossible one by any means. I would say, offhand, that the greatest difficulty would be in procuring enough fill, as you would have need for a tremendous volume of material to load up that valley.”

Jesse W. Reno, a pioneer in numerous vast engineering jobs and who is well-known for his salvage operations, and generally recognized as an engineering wizard, had this to say:

“Getting down to the proposal to divert the Hudson river, there is an old saying that if you have money enough, everything else merely resolves itself into finding something to do with it.

“Provided with sufficient money and time, particularly money, the project could be carried through to completion with unquestionable success. It would take more than a billion dollars, I have estimated. On the other hand, it would be quite in keeping with President Roosevelt’s rehabilitation and N.R.A. plan and put an enormous army of men to work. I heartily endorse the planâ€”though I am fully aware of the almost insurmountable impediments which appear at first study of the idea.”