Fingerprinting All Safeguards Each Citizen (Jun, 1935)

Sure, why wouldn’t everybody want the government to have their fingerprints? 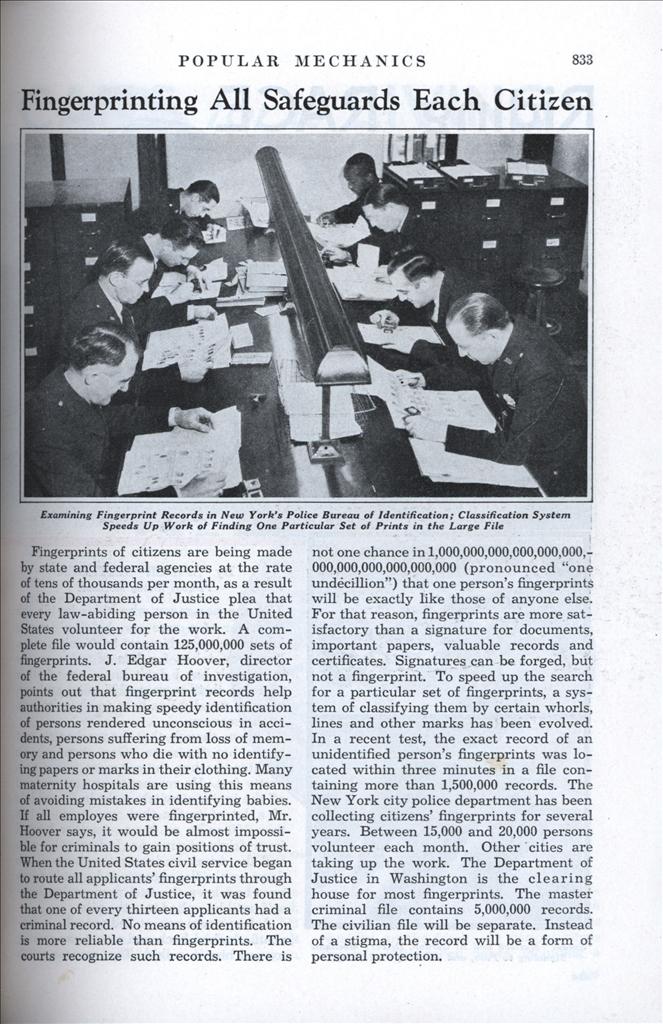 Fingerprinting All Safeguards Each Citizen

Fingerprints of citizens are being made by state and federal agencies at the rate of tens of thousands per month, as a result of the Department of Justice plea that every law-abiding person in the United States volunteer for the work. A complete file would contain 125,000,000 sets of fingerprints. J. Edgar Hoover, director of the federal bureau of investigation, points out that fingerprint records help authorities in making speedy identification of persons rendered unconscious in accidents, persons suffering from loss of memory and persons who die with no identifying papers or marks in their clothing. Many maternity hospitals are using this means of avoiding mistakes in identifying babies. If all employes were fingerprinted, Mr. Hoover says, it would be almost impossible for criminals to gain positions of trust. When the United States civil service began to route all applicants’ fingerprints through the Department of Justice, it was found that one of every thirteen applicants had a criminal record. No means of identification is more reliable than fingerprints. The courts recognize such records. There is not one chance in 1,000,000,000,000,000,000,-000,000,000,000,000,000 (pronounced “one undecillion”) that one person’s fingerprints will be exactly like those of anyone else. For that reason, fingerprints are more satisfactory than a signature for documents, important papers, valuable records and certificates. Signatures can be forged, but not a fingerprint. To speed up the search for a particular set of fingerprints, a system of classifying them by certain whorls, lines and other marks has been evolved. In a recent test, the exact record of an unidentified person’s fingerprints was located within three minutes in a file containing more than 1,500,000 records. The New York city police department has been collecting citizens’ fingerprints for several years. Between 15,000 and 20,000 persons volunteer each month. Other cities are taking up the work. The Department of Justice in Washington is the clearing house for most fingerprints. The master criminal file contains 5,000,000 records. The civilian file will be separate. Instead of a stigma, the record will be a form of personal protection.