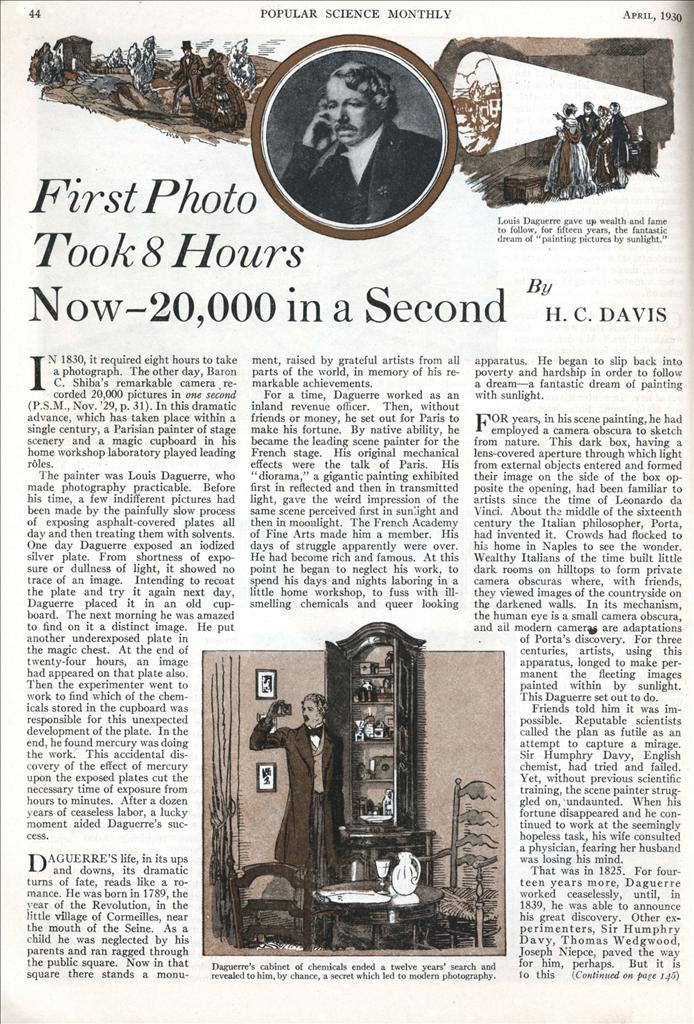 IN 1830, it required eight hours to take a photograph. The other day, Baron C. Shiba’s remarkable camera recorded 20,000 pictures in one second (P.S.M., Nov. ’29, p. 31). In this dramatic advance, which has taken place within a single century, a Parisian painter of stage scenery and a magic cupboard in his home workshop laboratory played leading roles.

The painter was Louis Daguerre, who made photography practicable. Before his time, a few indifferent pictures had been made by the painfully slow process of exposing asphalt-covered plates all day and then treating them with solvents. One day Daguerre exposed an iodized silver plate. From shortness of exposure or dullness of light, it showed no trace of an image. Intending to recoat the plate and try it again next day, Daguerre placed it in an old cupboard. The next morning he was amazed to find on it a distinct image. He put another underexposed plate in the magic chest. At the end of twenty-four hours, an image had appeared on that plate also. Then the experimenter went to work to find which of the chemicals stored in the cupboard was responsible for this unexpected development of the plate. In the end, he found mercury was doing the work. This accidental discovery of the effect of mercury upon the exposed plates cut the necessary time of exposure from hours to minutes. After a dozen years of ceaseless labor, a lucky moment aided Daguerre’s success.

DAGUERRE’S life, in its ups and downs, its dramatic turns of fate, reads like a romance. He was born in 1789, the year of the Revolution, in the little village of Cormeilles, near the mouth of the Seine. As a child he was neglected by his parents and ran ragged through the public square. Now in that square there stands a monu- ment, raised by grateful artists from all parts of the world, in memory of his remarkable achievements.

For a time, Daguerre worked as an inland revenue officer. Then, without friends or money, he set out for Paris to make his fortune. By native ability, he became the leading scene painter for the French stage. His original mechanical effects were the talk of Paris. His “diorama,” a gigantic painting exhibited first in reflected and then in transmitted light, gave the weird impression of the same scene perceived first in sunlight and then in moonlight. The French Academy of Fine Arts made him a member. His days of struggle apparently were over. He had become rich and famous. At this point he began to neglect his work, to spend his days and nights laboring in a little home workshop, to fuss with ill-smelling chemicals and queer looking apparatus. He began to slip back into poverty and hardship in order to follow a dreamâ€”a fantastic dream of painting with sunlight.

FOR years, in his scene painting, he had employed a camera obscura to sketch from nature. This dark box, having a lens-covered aperture through which light from external objects entered and formed their image on the side of the box opposite the opening, had been familiar to artists since the time of Leonardo da Vinci. About the middle of the sixteenth century the Italian philosopher, Porta, had invented it. Crowds had flocked to his home in Naples to see the wonder. Wealthy Italians of the time built little dark rooms on hilltops to form private camera obscuras where, with friends, they viewed images of the countryside on the darkened walls. In its mechanism, the human eye is a small camera obscura, and ail modern cameras are adaptations of Porta’s discovery. For three centuries, artists, using this apparatus, longed to make permanent the fleeting images painted within by sunlight. This Daguerre set out to do.

Friends told him it was impossible. Reputable scientists called the plan as futile as an attempt to capture a mirage. Sir Humphry Davy, English chemist, had tried and failed. Yet, without previous scientific training, the scene painter struggled on, undaunted. When his fortune disappeared and he continued to work at the seemingly hopeless task, his wife consulted a physician, fearing her husband was losing his mind.

That was in 1825. For fourteen years more, Daguerre worked ceaselessly, until, in 1839, he was able to announce his great discovery. Other experimenters, Sir Humphry Davy, Thomas Wedgwood, Joseph Niepce, paved the way for him, perhaps. But it is to this indomitable “bulldog of Cormeilles,” most of all, that the world owes its inestimable debt for practical photography.

His study concerned the chemical effects of light on various substances. He treated innumerable plates of glass, paper, copper, and silver, coating them with various varnishes and oils. He experimented with the silver chloride paper of Wedgwood and Davy. He tried the bituminized plates of Niepce. In the end, he found silver plates exposed to vapor of iodine most sensitive to light.

DURING his early experiments, Daguerre worked with Niepce. This retired soldier, who had fought with Napoleon in the Italian Campaign, had made a crude camera, before 1825, using a cigar box and a lens taken from a telescope which had belonged to his grandfather. His plate was made by coating glass with asphalt dissolved in oil of lavender. Pointing the camera out of his window at a pigeon house, he exposed the plate for eight hours. When he applied solvent to it, the dim outlines of the latent image became visibleâ€” the first permanent photograph of history.

Niepce called his process “sun sketching.” When he died in 1833, he had improved his process very little and apparently had given up hope for the success of practical photography. But Daguerre labored on, month after month, for six years more, until with success assured, he was able to show his Daguerreotypes to the world.

Even then, people were skeptical. When he tried to form a stock company the Parisian public jeered and refused to buy a single share. In desperation, he took a chance, showed his pictures, and explained the secret process by which they were obtained to the eminent French physicist, Arage, who gave his endorsement. As a result, the French government awarded Daguerre a life pension of 6,000 francs a year on the condition that his invention should be given to the world and not patented. Once again, the affairs of this remarkable man were at the flood. Hundreds of distinguished men visited his studio and sought to learn his process.

ONE of these was Samuel F. B. Morse, later the inventor of the telegraph, who first introduced the Daguerreotype in the United States. It is easy to understand the strained, unhappy look of the early “tintype” portraits when it is realized that they had to be taken with the sitter’s face covered with white powder, and with the exposure, frequently lasting half an hour, made in bright sunlight. Professor John Draper, another early American Daguerreotyper, introduced a popular innovation. Above the sitter, he placed a tank of clear blue ammonia copper sulphate to lessen the painful glare.

For only a decade, from 1839 to 1849, the “tintype” held sway. Delicate, so that the merest touch often marred its beauty, tarnishing rapidly when exposed to the air, it soon gave way to improved methods of picture taking. Some of the early silver-coated plates cost as much as forty dollars apiece.

No one knows the number of cameras used for pleasure in the world today. Photography has become an inseparable part of present-day life. The last available statistics show that in one year $72,000,000 worth of photographic equipment was produced in the United States. In motion and talking pictures, it provides relaxation for millions. In the hands of science, it aids in virtually every branch of research. In medicine, it has combined with the X-ray to relieve human suffering.

In later years, Daguerre suffered from ill health, worn out by his long battle. He died suddenly in 1851, at the age of sixty-three.