Looks like the Gillette Fusion isn’t really that new after all. Plus, this razor never, ever needs to be sharpened! The wouldn’t lie to me, right? 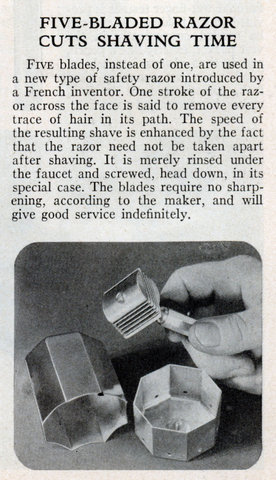 FIVE-BLADED RAZOR CUTS SHAVING TIME
Five blades, instead of one, are used in a new type of safety razor introduced by a French inventor. One stroke of the razor across the face is said to remove every trace of hair in its path. The speed of the resulting shave is enhanced by the fact that the razor need not be taken apart after shaving. It is merely rinsed under the faucet and screwed, head down, in its special case. The blades require no sharpening, according to the maker, and will give good service indefinitely.