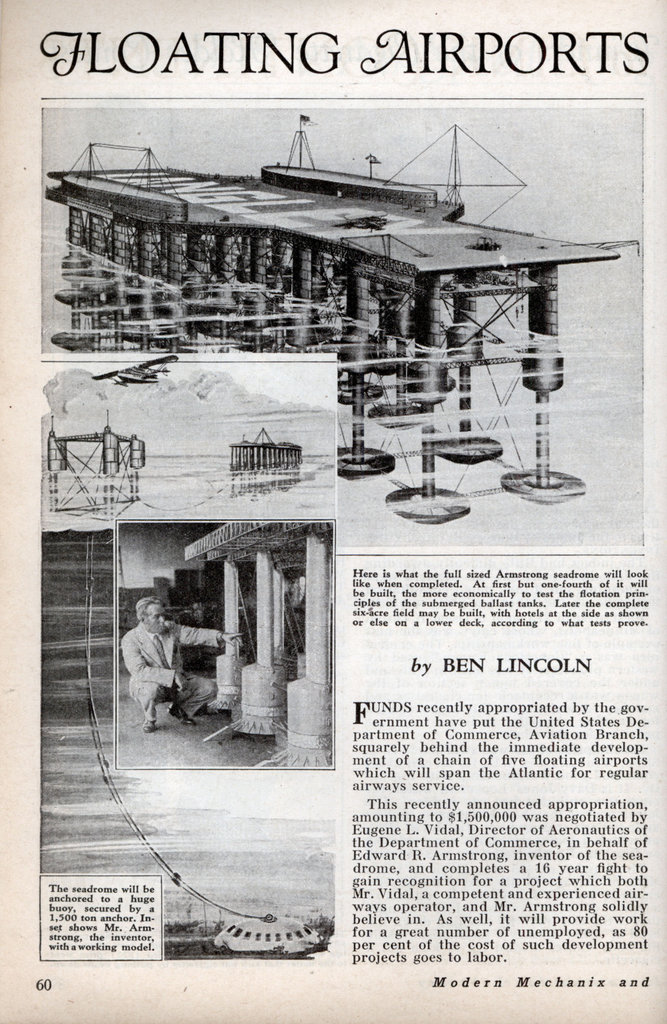 FUNDS recently appropriated by the government have put the United States Department of Commerce, Aviation Branch, squarely behind the immediate development of a chain of five floating airports which will span the Atlantic for regular airways service.

This recently announced appropriation, amounting to $1,500,000 was negotiated by Eugene L. Vidal, Director of Aeronautics of the Department of Commerce, in behalf of Edward R. Armstrong, inventor of the seadrome, and completes a 16 year fight to gain recognition for a project which both Mr. Vidal, a competent and experienced airways operator, and Mr. Armstrong solidly believe in. As well, it will provide work for a great number of unemployed, as 80 per cent of the cost of such development projects goes to labor.

This $1,500,000 is for immediate experiments with a quarter-section ocean landing-field and ends a sixteen-year struggle for recognition of the seadrome system. The final plan calls for a $30,000,000 outlay by the government, contingent on the success of the preliminary experiments now under way.

According to information gathered by this member of the staff of Modern Mechanix and Inventions, the ultimate plan calls for similar seadrome stations in the Pacific and other oceans, giving the United States an international supremacy of the air lanes. Great Britain and France both gave the Armstrong plan serious consideration but failed to adopt it.

The proposed system calls for five Armstrong seadromes at 500 mile intervals from the Atlantic seaboard here to the western coast of Europe. Each drome will cost $6,000,000.

Back in 1927 when Armstrong completed his first models of the floating deck, he intended to have hangars and hotels on the six-acre surface. But the design which has been accepted by the government calls for a vacant deck, with hangar and hotel accommodations confined to two or three decks below the surface.

The seadromes will be 1,225 feet long and 300 feet wide. An elevator will take planes from the surface to the underdeck hangars. This specially-designed elevator will adequately handle planes with wing spans up to 120 feet This flying deck will be supported in place by a number of ballast tanks sunk sufficiently below the water so that the flotation arrangement will be unaffected. That was the inventor’s predominant problem, constructing his float so that it would not shift and toss with the huge waves.

A truss system of anchorage will hold the big deck by means of cables to a 1,500-ton weight on the bottom of the ocean. The truss-like arrangement will consist of twenty-eight buoyancy tanks floating far beneath the ocean’s surface. In turn these will be linked to the deck by means of cast iron columns streamlined into an oval shape above the mean level of the waves and circular below.

Columns 300 Feet Deep Underneath the buoyancy tanks these columns will continue downward a hundred feet to the ballast chambers which will be stabilized by iron ore. The complete column, including the ballast sections, will be over 300 feet in depth.

Mr. Armstrong has taken advantage of a well-known principle in the construction of his ocean island. Ocean waves are surface disturbances only, while water in the depths is still.

“A model of the proposed seadrome was constructed and tested together with a model of the steamship Majestic, built to the same scale,” Mr. Armstrong said.

“Under test conditions it was found that the seadrome was unaffected by any combination of waves up to and including those equivalent to 180 feet in height. The model of the Majestic on the contrary was practically swamped in waves exceeding 80 feet in height.”

The engineers of the Seadrome Ocean Dock Corporation associated with Mr. Armstrong estimate that 125,000 tons of iron and steel will be required to erect five airports and anchorages.

30 Hours New York to London The seadromes will have radio stations and radio beams to guide the air-liners in inclement weather.

Attached to each seadrome there will also be sea-going cutters of the Coast Guard type for emergency as well as auxiliary duty. The floating decks will have weather stations.

At the present time the quarter section of a seadrome is being constructed behind the Delaware Breakwater. When it is finished early next summer it will be towed out to sea for the tests. If it comes up to the expectations of its sponsors, the three other sections will be built and the entire seadrome assembled. In turn work will then be started on the rest of the ocean airports.

Mr. Armstrong estimates that a 24-hour service can be maintained on the Atlantic Ocean, but he further modifies that calculation in plotting the trip between New York and London. He intends to make that journey a 30-hour trip in eight jumps of 160 miles per hour.