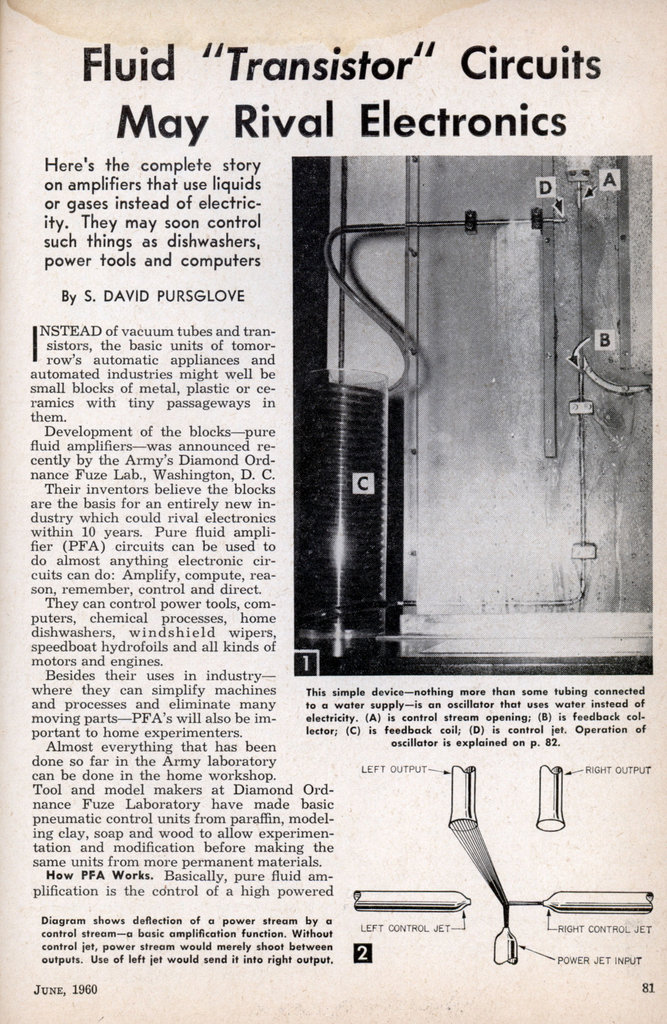 Here’s the complete story on amplifiers that use liquids or gases instead of electricity. They may soon control such things as dishwashers, power tools and computers

INSTEAD of vacuum tubes and transistors, the basic units of tomorrow’s automatic appliances and automated industries might well be small blocks of metal, plastic or ceramics with tiny passageways in them.

Their inventors believe the blocks are the basis for an entirely new industry which could rival electronics within 10 years. Pure fluid amplifier (PFA) circuits can be used to do almost anything electronic circuits can do: Amplify, compute, reason, remember, control and direct.

Besides their uses in industryâ€” where they can simplify machines and processes and eliminate many moving partsâ€”PFA’s will also be important to home experimenters.

Almost everything that has been done so far in the Army laboratory can be done in the home workshop. Tool and model makers at Diamond Ordnance Fuze Laboratory have made basic pneumatic control units from paraffin, modeling clay, soap and wood to allow experimentation and modification before making the same units from more permanent materials.

How PFA Works. Basically, pure fluid amplification is the control of a high powered stream by a lower powered stream which hits it from the side to deflect it.

Picture a heavy stream of water from a tube being hit from the side by a less energetic stream from another tube (Fig. 2). The heavy (or power) stream is deflected by the lighter (or control) stream. This is amplification: The control of a large amount of energy by a smaller amount. This works the same way as a triode vacuum tube, or amplifier. The tube does not create energy; it uses a small current to direct a larger one.

The first PFA made at DOFL had a variable control stream (Fig. 3). As the control stream pressure is increased, the power stream deflects farther to the left. The angle of deflection and the power of the deflected stream are measured by flow meters.

This back and forth switching is oscillation. It depends on feedback and is identical to oscillation set up by positive feedback in an electrical circuit.

The frequency of oscillation depends mainly on the length of the feedback loop or circuit. In Fig. 1, a demonstration model, it is very long so that oscillation will be slow enough to be seen by spectators.

Pure fluid amplifiers were invented by Army scientists from three disciplines, each contributing something from his field to the creation of an entirely new field. Billy M. Horton is a physicist and electrical engineer and is chief of the Systems Research Laboratory of DOFL. Dr. R. E. Bowles started as a mechanical engineer, later specialized in aeronautical engineering, and is chief of DOFL’s Non-Radio System Branch. Raymond W. Warren is a mechanical engineer and research supervisor in the Non-Radio System Branch.

Boundary Layer Gives “Memory.” The boundary layer effect, in large part responsible for aircraft flight, also has been applied to fluid amplifiers. To use this effect, the inventors enclosed the PFA systems by cutting circuit diagrams into the surface of metal, plastic and ceramic blocks.

When face plates were bolted over the channels and grooves, the result was a solid block containing tunnels (Figs. 4 and 5).

In Fig. 5, the power jet is at the bottom, two control jets on either side. Passageways are split as a V to carry the deflected power stream either to the right or to the left outlets at the top. Note that one passageway is wide and the other is narrow to create an imbalance.

When the power stream comes from its jet, it sucks fluid molecules from the region on each side of the jet and lowers the pressure on each side. If there is a higher pressure on the right than on the left, for example, an unbalanced force pushes the stream to the left. This can be achieved by proper chamber design. If the chamber walls are close enough together, one side will develop a lower pressure, the power stream will be more efficient in sucking molecules from that area, and it will deflect toward that wall. This is a boundary layer.

If the outlet for the power stream deflected by the boundary layer is plugged, the power stream spills over to the other chamber. However, it continues to push against the plugged outlet. This is a type of “memory.” This lets specific conditions deflect a power stream in a desired direction and guarantees that the energy flow will continue in that direction until it is changed by a signal (control stream).

By combining memory units and oscillating units in sophisticated circuits, pure fluid amplification can do practical work. They can replace electrical components in electronic systems, and they can replace mechanical parts and moving-part fluid amplifiers in fluid systems.

PFA-Controlled Wipers. An automobile windshield wiper is a fluid-mechanical device. Non-electrical wipers work off the manifold, which has a pressure lower than the atmosphere. In the motor there are two chambers. First one, then the other, is connected to the manifold. For example, connect the left chamber to the atmosphere. The atmosphere pushes against the separating wall and moves the wiper. When it has moved as far as possible in one direction, the wiper arm trips a little mechanical valveâ€”a flapper â€”which reverses the connections.

A pure fluid amplifier using the boundary layer effect involves no moving parts (except, of course, the arm which carries the wiper blade). When used in a wiper motor (Fig. 6), the PFA’s “memory” could be pre-set to send the air stream from the atmosphere out the right side. When the wiper blade reached the left, it would uncover a port to admit air as a control stream to send the blade back to the right. No port would need to be uncovered after the blade moved to the right because the boundary layer “memory” would send the blade back to the left. This eliminates not only the flapper valve, but also linkages and one set of connections which wear out (and which add to the complexity and cost of the wiper unit).

Automatic washers using PFA’s would still need electricity to run their motors, but the cycle timer, actuator and all other automatic functions could be controlled by fluid amplifiers using water. Future automatic washers could use PFA oscillators based on the principles shown in Fig. 1 to provide a periodic pulse, eliminating the need for a control clock and the cams it drives to turn the water on and off and regulate motor speed for washing, draining, rinsing, spinning and drying. Another fluid amplifier device, probably using a temperature-sensitive bimetallic strip, would control the water temperature.

Hydrofoil Controls. The inventors say that PFA’s with memories should have one particularly exciting sports use: They could automatically adjust speedboat hydrofoils to constantly varying water conditions; their memories would make variable pitch hydrofoils return to their normal angle of attack between waves and ripples.

Most military applications are classified. However, the inventors say PFA’s will make possible truly rugged all-environment automatic pilots for aircraft. They would be operated by air scooped into the unit by a venturi tube outside the plane. A pure fluid amplifier could be the basis for non-electrical computers, signalling systems, or guidance units that will withstand severe mechanical or thermal shock and will not be affected by radio jamming, cosmic rays or atomic radiation. Hot-gas-servomechanisms will use ceramic PFA’s that will operate with the hot gases from a rocket exhaust, artillery barrel or bazooka tube to adjust fuel control and automatic reloading and firing.

If this enthusiasm is any clue, the new industry is already well under way. Industrialists are aware of two PFA limitations:

However, PFA’s will not wear out; there is no maintenance or replacement involved. They can be used in conditionsâ€”such as high heat or humidityâ€”that preclude electronics. And, finally, cost is a factor.

Where they are applicable, fluid amplifiers made by printed circuit etching techniques should cost about 0.2C for each 50c that vacuum tubes would cost for the same system.