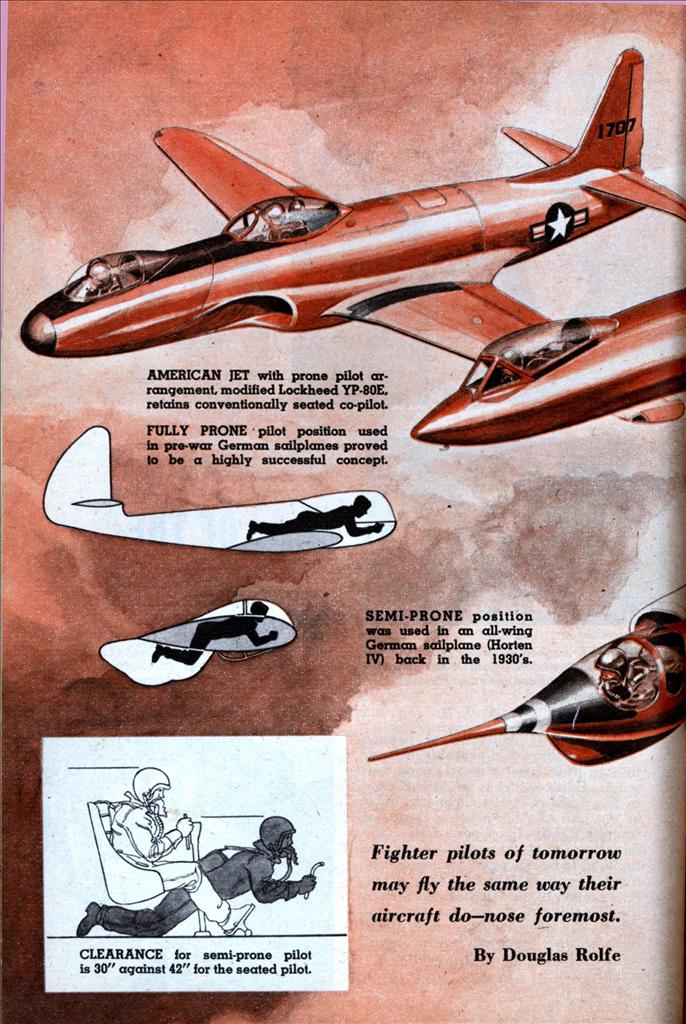 Flying Down On The Job

THE first airplane to get off the ground back in 1903 was flown by a prone pilot. Originated by the Wright Brothers, the prone pilot position was soon abandoned in favor of the upright seat and was to all intents and purposes a dead issue until the mid-30’s.

Then the Germans revived the idea in their search for better sailplane performance. During the second World War the Germans again experimented with the prone pilot position—this time in some of the jet fighters they were developing and demonstrating to an astonished world. They also experimented with the supine position in which the pilot lies on his back—but that’s another story.

The advantages of the prone pilot position are as obvious as they are limited. A much smaller airframe is possible with the pilot lying down instead of seated but this advantage would be useful only in military, racing or aerobatic aircraft, equipped with very small jet engines not yet in production. Several such small engines are on the way and once they are actually in production it is more than likely that the prone pilot position will become an important issue. For aerobatics the prone position is tops and in the prone position the pilot is much less vulnerable to the stresses of supersonic flight. The seated pilot blacks out long before the prone pilot.

My own design for the small delta-wing fighter or racer, as illustrated, would have an ejection pod (possibly pressurized, containing the pilot), which could be parachuted to earth. Conventional tricycle landing gear would be reversed with the two main wheels retracting inwards into the leading edge roots and the tail wheel retracting into the fuselage section between the jet ducts.