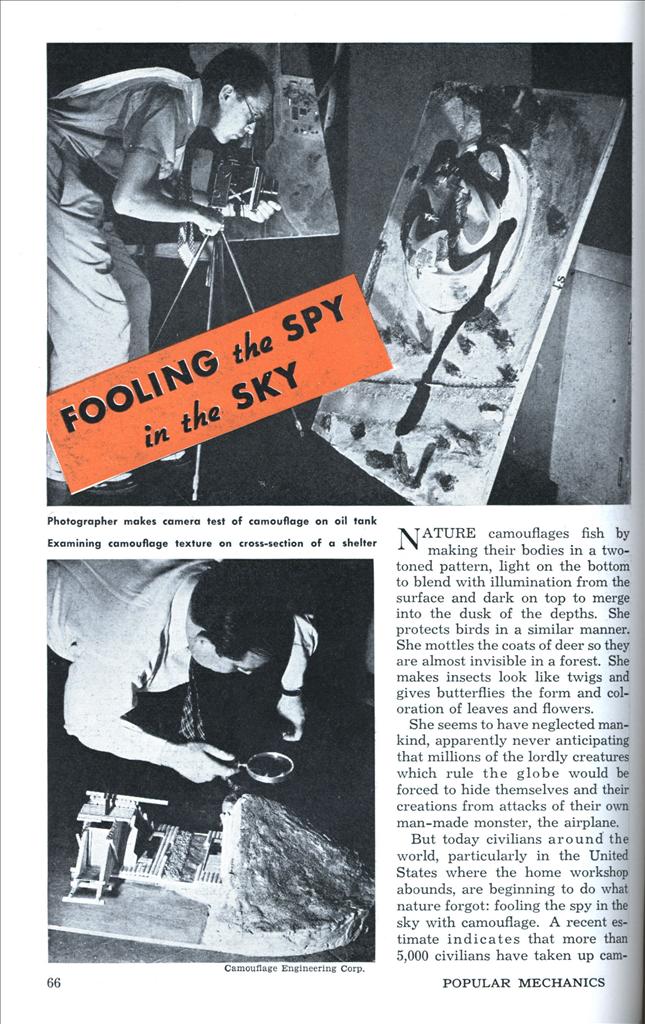 FOOLING the SPY in the SKY

NATURE camouflages fish by making their bodies in a two-toned pattern, light on the bottom to blend with illumination from the surface and dark on top to merge into the dusk of the depths. She protects birds in a similar manner. She mottles the coats of deer so they are almost invisible in a forest. She makes insects look like twigs and gives butterflies the form and coloration of leaves and flowers.

She seems to have neglected mankind, apparently never anticipating that millions of the lordly creatures which rule the globe would be forced to hide themselves and their creations from attacks of their own man-made monster, the airplane.

But today civilians around the world, particularly in the United States where the home workshop abounds, are beginning to do what nature forgot: fooling the spy in the sky with camouflage. A recent estimate indicates that more than 5,000 civilians have taken up camouflage research as a serious occupation, about 80 percent of them without pay from the government. Many more work at it as a pastime in cellar workshops. The result is that many extremely valuable ideas have been fed into the military and civilian defense organizations. So intriguing has the study of protective concealment become it is likely that no less than 25,000 specialized civilian brains will be backing up the experts of our armed and civilian defense forces within a year or so. This is aside from experimenters in the military forces, where anyone who displays a working knowledge of camouflage is snapped up quickly.

Artists, architects, engineers, photographers, industrial designers, stage designers, magicians, chemists, sculptors, mathematicians, modelmakers, taxidermists, landscapers and movie technicians whose special training fits them for angles of the fooling game are contributing to the national effort. From dentists, who learn to camouflage teeth, to paint and dye experts, who know the importance of color in protective concealment, the list is long. In fact, camouflage research is showing signs of growing into a hobby. Any fertile mind can help, and the best ideas may yet come out of a home workshop.

Much of what was learned in previous wars has become practically useless because of the color camera and infrared photography which spot color differences invisible to the eye. The development of gigantic flashlights for night spying, combined with the use of the airplane, have made it extremely difficult to fool the enemy. The fundamentals of camouflage, however, are still simple.

Since military camouflage is well in hand, the best point of approach to the subject is industrial or civilian camouflage, because the problems are million-fold and each has a different aspect. Every important building, every road, every gas or oil tank within reach of possible bombing needs protective concealment. The government has not yet completely coordinated local civilian camouflage efforts, and most manufacturers and municipal officials have not really tackled the problem. But eventually every important spot requiring camouflage will be photographed from the air, maps will be made, concealment designs worked out.

Camouflage will be applied, aerial mapping will test the results.

Meanwhile the field is wide open for patriotic and inquisitive minds. Cooperation and information will be given by the office of Civilian Defense in Washington, D. C. to responsible persons.

The basic idea is to provide either concealment or confusion of identity, or both. An example of concealment would be the application of splotches of paint to the roof of a small factory and the construction of screens and ragged extensions to the roof, to blend it into nearby trees and shadows. An example of confusion of identity would be to change the exterior of the factory and add fences, smaller buildings and vegetable patches to make it look like a farm, or to build similar fake rooftops nearby.

A railroad spur which gives away the presence of a factory, can be made to look like a road, or extended beyond the factory with dummy tracks and ties to mislead the bombardier. Roads which lead to an important building can be extended by false work so that they rise to the roof, cross it and continue beyond. Concrete roads can be painted blue, as they have been in Europe, or brown in the winter and green in the summer to merge with surrounding fields. Many materials can be suggested to prevent roads from shining with reflected sky light when wet. Dyed crushed stone, oil and sand are useful. Better materials may be available in local supplies.

Important highways can be given the benefit of confusion by adding parallel or intersecting false roads. Strategic road junctions can be disguised by painting out some of the known roads, screening others, covering the junction point with nets and using detours, both real and fake. Plans are needed. Smoke pots have been found valuable to hide roads, their efficiency depending upon the visibility, the wind and time available to get them in operation. Parking fields are another telltale sign of a big factory and any bright mind can work out irregular arrangements of trees, nets and screens to make a parking lot look like a grove.

Tanks can be painted dark and their shadows broken up with false work extending to the edge of the roof and beyond. Paints should match surrounding colors. Dazzle painting is called for in some cases. Or two tanks can be connected with falsework and squared off to look like an innocent barn. Docks can be shielded with irregular roofs projected from adjacent buildings, and painted so they harmonize with the nearby water, even to the ripples.

Smokestacks can be removed and forced draft installations substituted to carry smoke to a point some distance from a plant needing concealment Or other sources of smoke can be added to produce confusion. Windows can be treated in many ways to lessen reflections. Landscaping arrangements can be planned for roofs. New materials to simulate grass can be found. Bridges are hard to hide, but approaches can be masked and the bridge structures painted to blend with water beneath. Where one prominent object exists which cannot be concealed, like a tank, the erection of a number of dummies in the same vicinity will cause confusion.

Two general principles must be kept in mind.

Nature creates rivers, hills, trees, shrubbery and other features in her landscape in irregular patterns and colors them with many contrasting hues. Man builds his roads and docks in straight lines, his buildings in rectangular form and paints in one or two tones. The straight line, the oval, the triangle, the circle, the square and rectangle in somewhat perfect form are his invention. The object of the fooling game is usually to restore the diffused pattern of nature.

The second thing to remember is this: thanks to the scientific perfection of the modern aerial camera, a shadow is often easier to see than the object itself and the aerial camera is so good it can spot a man’s footprints on grass from two miles in the sky. The camera can pierce fog opaque to the eye.

One way to conceal a shadow is to paint another on a building so as to extend or confuse its outlines. But painted shadows, valuable as they are, have a fatal drawback. They do not shift with the sun and the seasons like real shadows. Thus shadows must be painted so as to look natural at the most likely time of aerial reconnaissance or bombing raid and must often be shifted with the seasons.

To provide this shadow information throughout the year, Pratt Institute in Brooklyn, N. Y., has put into operation a sun machine which will calculate the direction of a shadow cast by any object, any second of the day, any day of the year in any part of the world. This information is available to anyone.

Other organizations which will cooperate with information are the American Institute of Architects, National Paint, Varnish and Lacquer Association, the American Society of Civil Engineers, National Society of Heating and Ventilating Engineers and the Camouflage Society of Professional Stage Designers which have a camouflage laboratory in New York City.

Since most of the preliminary research is done with miniature, table-top models, which may be tested by table-top photography, it is likely that camouflage will develop into a widespread home workshop hobby if the war lasts long. Lots of us will be fooling the spy in the sky.