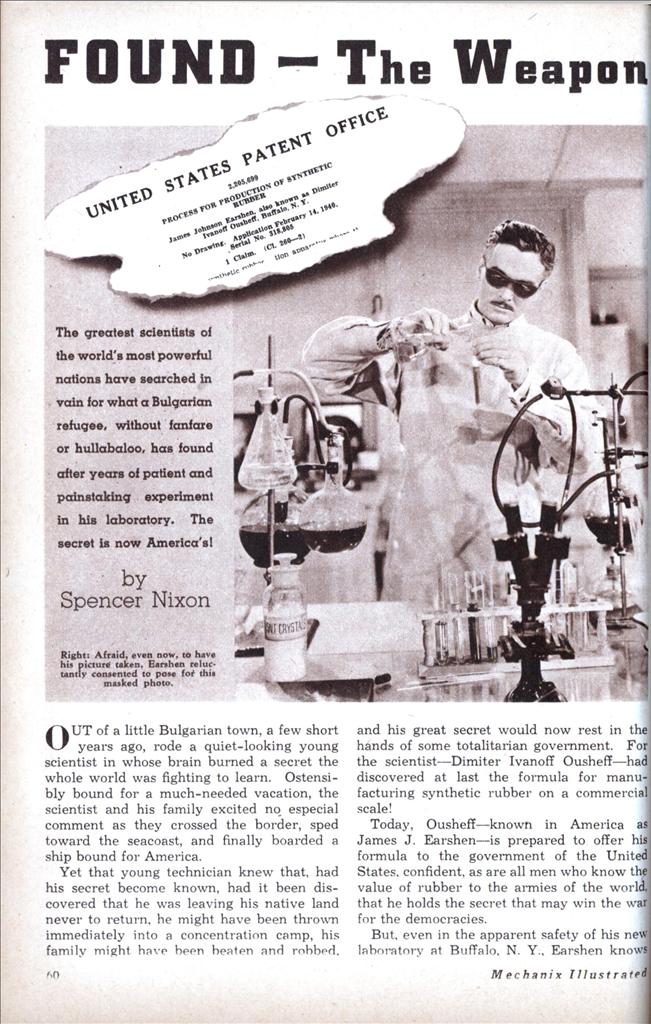 OUT of a little Bulgarian town, a few short years ago, rode a quiet-looking young scientist in whose brain burned a secret the whole world was fighting to learn. Ostensibly bound for a much-needed vacation, the scientist and his family excited no especial comment as they crossed the border, sped toward the seacoast, and finally boarded a ship bound for America.

Yet that young technician knew that, had his secret become known, had it been discovered that he was leaving his native land never to return, he might have been thrown immediately into a concentration camp, his family might have been beaten and robbed.

and his great secret would now rest in the hands of some totalitarian government. For the scientist—Dimiter Ivanoff Ousheff—had discovered at last the formula for manufacturing synthetic rubber on a commercial scale!

Today, Ousheff—known in America as James J. Earshen—is prepared to offer his formula to the government of the United States, confident, as are all men who know the value of rubber to the armies of the world, that he holds the secret that may win the wall for the democracies.

But, even in the apparent safety of his new laboratory at Buffalo, N. Y., Earshen knows that he and his discovery still are not secure from the prying eyes of his enemies. It is for this reason that he steadfastly refuses to show his face to a camera. He well remembers the agent of one foreign power who came to him in the guise of a prospective buyer of an oil filter, another Earshen invention. The foreigner spent some time in discussing the transaction, but left, finally, without coming to a decision.

One year later, an exact replica of the Earshen device was pictured and described in a European magazine, with the credit of discovery going to the country from whence the foreigner had come. They had stolen it as easily as a shoplifter snatches an apple!

Already several syndicates have approached him with the idea of purchasing his synthetic rubber formula, but he has turned them all down. Failing to deal with him this way. one or two of them even put their chemists to work at an attempt to decipher his patent specifications!

“It won’t do them any good, though,” he told this writer. “I’ve learned my lesson— no one else can possibly direct the manufacture of this rubber with any degree of success.”

Offhand, one might imagine that this is quite a lot of hullabaloo about a formula for Asking synthetic rubber the average reader of the globe. There’s just one little “however,” though, that accompanies each of the other synthetic rubber discoveries that have been made—the catch is that the stuff can’t be manufactured commercially. It works well in the laboratory and, in sample form, looks just as good as the real thing. But it isn’t!

During World War I, the blockade forced Germany to use a crude synthetic known as buna to satisfy the nation’s war needs in rubber. Later, German chemists strove desperately to place buna on a practical, commercial scale, but it was no dice—buna not only cost over 200 percent more than other experimental synthetics, but lacked the proper strength and tension so essential for natural crude rubber. In other countries, other substitutes have sprung up, as each government realized the value of rubber to a war machine, especially a mechanized one! But, one by one they’ve been abandoned, as have those that have originated in the United States.

Now, it seems the problem has been solved —while hosts of other American inventors have been laboring industriously to provide this country with secret weapons, Earshen has been working quietly, perfecting a product that not only will fill that bill, but which may well start a revolution in the world of rubber!

Earshen’s discovery has not been a sudden one. For six years he toiled in his native Bulgaria, spending his entire family fortune— estimated at approximately $400,000 in Bulgarian money—on the attempt. He had it about licked, too, when the realization came to him suddenly that his country was not the proper place, either to manufacture the synthetic on a large scale or protect it from; foreign seizure. Accordingly, he packed up and came to America.

Even in this country, his road has not been an easy one. He has had to experiment with all types of raw materials, devise hundreds of new formulae, and many different methods of manufacture, before arriving at the final answer. But his labors were worth the pains when one considers that his synthetic is approximately 45 percent stronger than crude, by test, and more than 85 percent cheaper to produce! Furthermore, his man-made composition, in addition to being 45 percent more resistant than the natural product, is 75 percent more absorptive and capable of more than twice the wearing me of crude rubber, even when strengthened by reclaim and other life-giving processes.

Imagine using your automobile tires till they’d gone 85,000 miles! That’s what Earshen’s rubber will do for you. And, contrary to the flaws usually found in all other artificial rubbers discovered to date. Earshen’s has none.

What’s the secret behind this remarkable product? Well, naturally, the inventor isn’t broadcasting his product throughout the length and breadth of the land. He does admit that the most startling feature of its composition is that it embodies a combination of three groups of materials.

In all three groups, only gases which have been taken from all ingredients, and have been obtained through dry distillation, are used. After all three groups have been distilled, they are transferred into a common receiver in a 4:1:1 ratio and mixed together at a heating temperature of from 550 to 600 degrees centigrade.

Acetylene gas then is pumped through the compound, and a mixture of very fine powders obtained from iron, copper, zinc and nickel, is dissolved in the concoction. The gases then are reduced to a condensed form, in which the final product is the synthetic rubber in the form of a jelly, which is drained and cooled into a stable elastic form.

In an effort to keep his process out of the national spotlight until the proper time, Earshen has made several unofficial tests at of the country’s largest automobile testing laboratories. The results, he has said, confirmed his belief that the product is the toughest rubber ever produced.

Now, granted that you aren’t an expert on international trade, consider, for a moment, the staggering magnificence of this discovery by the plodding Buffalo inventor, now an American citizen and one who is working as hard as any man in the interests of our national defense: On the day Germany sped her mechanized legions into Poland, high U. S. Government officials began to worry about the fate of this country should we be cut off from the foreign rubber markets. Their worries have never lessened, as the Axis spread its tentacles farther and farther around the globe and generally in the direction of the Far East, origin of 90 percent of the world’s crude rubber supply.

America, one of the world’s greatest rubber users, gets 97 percent of her crude from the Malayan States, French Indo China and the Dutch East Indies—the very hotbeds of the present conflict! Even if the war were not actually beginning to center in these areas, the question of transportation across a hostile ocean—should the United States go to war—would be alarming. Only a small amount of U. S. rubber comes from South America.

Our own soggy marsh lands in the southern states could possibly be cultivated into rubber plantations, but it would take 15 years to yield a reasonable amount for commercial use.

It is little wonder then that, when Earshen patented his formula and process recently, government spokesmen—after testing the substitute— unofficially promised that if Earshen could produce the rubber on a large scale basis, this country would be in the market immediately for several million tons. The word “unofficially” is attached because of the inventor’s refusal to sell his process to an established American rubber company, even in the face of most attractive offers.

“I’ve carried the thing this far,” he announced “Now I’ll stay with it to the end.”

Accordingly, he has incorporated the J. J. Chemical Company, which has on deposit in one of the Buffalo banks $500,000 with which to begin production. The inventor now is selecting his plant site, and by fall expects to be in the business of manufacturing his brain-child.

In July of 1940, America paid 17.7 cents a pound to import crude rubber. Now, because of the war, we are paying 20 cents a pound, with the ceiling nowhere in sight. With the Earshen product, however, a proven superior to the present commodity, the price is expected to fall to approximately ONE CENT A POUND, counting the return from by-products—and with no orders being considered from the totalitarian states! According to the inventor, no other synthetic rubber ever has been produced that could be obtained for less than $1.50 a pound.

But, though you may be considering the economic saving this invention will reap for the United States, think for the moment of the economic advantages which may accrue to Dimiter Ivanoff Ousheff. He has followed the rainbow to its happy end, found the pot of gold, and now stands in a position to garner millions. In addition, he may be America’s white knight, ready and able to vanquish the enemy and turn out to be the greatest hero the world has ever known.