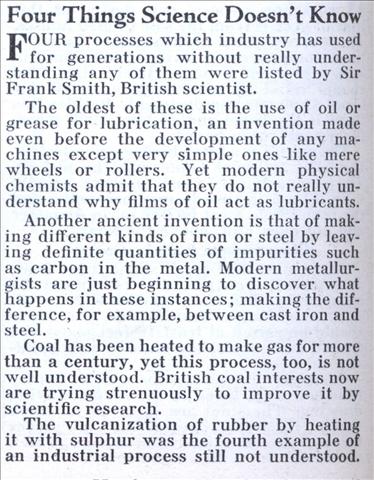 FOUR processes which industry has used for generations without really understanding any of them were listed by Sir Frank Smith, British scientist.

The oldest of these is the use of oil or grease for lubrication, an invention made even before the development of any machines except very simple ones like mere wheels or rollers. Yet modern physical chemists admit that they do not really understand why films of oil act as lubricants.

Another ancient invention is that of making different kinds of iron or steel by leaving definite quantities of impurities such as carbon in the metal. Modern metallurgists are just beginning to discover what happens in these instances; making the difference, for example, between cast iron and steel.

Coal has been heated to make gas for more than a century, yet this process, too, is not well understood. British coal interests now are trying strenuously to improve it by scientific research.

The vulcanization of rubber by heating it with sulphur was the fourth example of an industrial process still not understood.