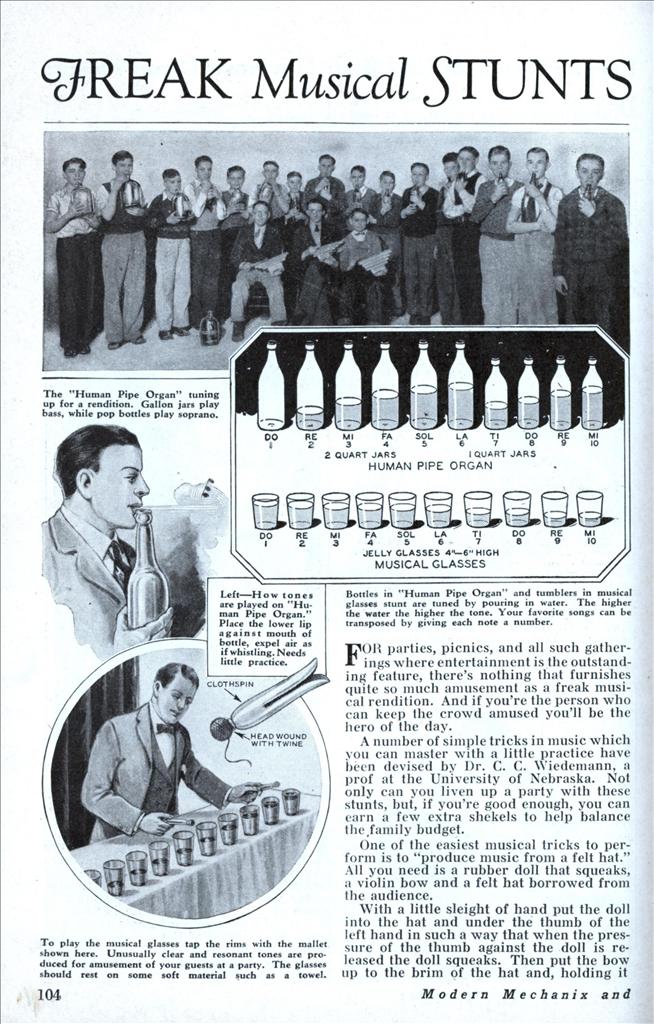 FOR parties, picnics, and all such gatherings where entertainment is the outstanding feature, there’s nothing that furnishes quite so much amusement as a freak musical rendition. And if you’re the person who can keep the crowd amused you’ll be the hero of the day.

A number of simple tricks in music which you can master with a little practice have been devised by Dr. C. C. Wiedemann, a prof at the University of Nebraska. Not only can you liven up a party with these stunts, but, if you’re good enough, you can earn a few extra shekels to help balance the family budget.

One of the easiest musical tricks to perform is to “produce music from a felt hat.” All you need is a rubber doll that squeaks, a violin bow and a felt hat borrowed from the audience.

With a little sleight of hand put the doll into the hat and under the thumb of the left hand in such a way that when the pressure of the thumb against the doll is released the doll squeaks. Then put the bow up to the brim of the hat and, holding it there a moment, say: “Sing to me, hat! sing to me!” Then draw down the bow, at the same time releasing the thumb pressure on the rubber-doll. The result is a squeaking sound that mystifies your audience. They can’t understand how a bow drawn across a felt hat produces such tones.

“Music on the head” is a tuneful oddity which may be accomplished much easier than one would think. This music is produced by tapping on the top and near the front of the head with a specially constructed mallet.

Materials needed to construct the mallet are illustrated in an accompanying drawing. Bore a one-fourth inch hole through the center the length of the cork and then glue one end of the twig into the hole. Next wrap the cork very tightly with the twine until the ball formed is between 1-1/4 and 1-1/2 ins. in diameter.

The mouth held open helps to intensify the sound of the tone. “The Bear Went Over the Mountain” is probably the easiest tune to play on the head and the beginner should use this piece to practice on.

A “human pipe organ” may be obtained by securing a number of bottles, with a person to manipulate each bottle, as depicted in an accompanying photo. The bottles are played by placing the lower lip against the top-edge of the open end of a bottle. Then move the lower jaw slowly up and down with the muscles of the neck, at the same time expelling air until a point is discovered which causes the bottle to sound.

The materials needed are six two-quart and four one-quart grape-juice or beer bottles.

Now pour water into one of the one-quart bottles until its tone is the same as the highest tone of the bugle call. This tone should be one octave above the tone of the first empty two-quart bottle. You now have constructed Do, Fa, La, Do of the vocal scale.

Quantity of Water Determines Notes Begin with the tone of the bottle corresponding to Mi and sing the first six tones of “Annie Laurie.” The sixth is Ti. Pour water into a one-quart bottle until its tone is the same as the Ti which you sang. Continue to tune the remaining two one-quart bottles to correspond to the Re and Mi which are one octave higher than the Re |and Mi of the two-quart bottles. The ten bottles when properly tuned and in order should represent the vocal scale, Do, Re, Mi, Fa, Sol, La, Ti, Do, Re, Mi.

As many people cannot read the note symbolism of music, Dr. Weidemann has devised a very simple system of “number music” to indicate the different tones to be played. To use this system, arrange the musical bottles as illustrated in an accompanying drawing. Here’s how you’d play “The Last Rose of Summer”.

Number music for other simple tunes such as “Old Black Joe” and “Silent Night” can be figured out by the player.

Playing on musical glasses is a trick closely related to the “human pipe organ.” Either table or jelly glasses more or less filled with water to form the musical scale are needed for the musical glasses. The rims of the glasses are tapped with prepared mallets to produce the tones, but if very thin large glass tumblers are used, the sounds can be produced by putting resin on the finger tips and rubbing the rims of the glasses gently with the finger-tips to produce unusually clear and beautiful tones. Tuning is done in the manner of the “human pipe organ.”