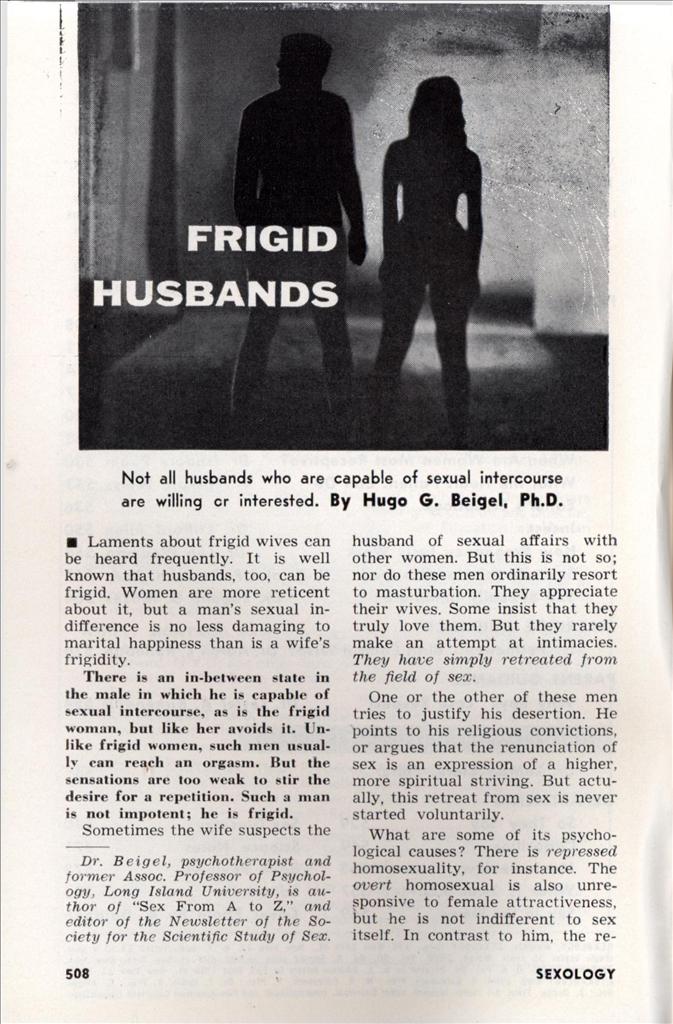 Not all husbands who are capable of sexual intercourse are willing or interested. By Hugo G. Beigel, Ph.D.

Laments about frigid wives can be heard frequently. It is well known that husbands, too, can be frigid. Women are more reticent about it, but a man’s sexual indifference is no less damaging to marital happiness than is a wife’s frigidity.

There is an in-between stale in the male in which he is capable of sexual intercourse, as is the frigid woman, but like her avoids it. Unlike frigid women, such men usually ran reach an orgasm. Hut the sensations are too weak to stir the desire for a repetition. Such a man is not impotent; he is frigid.

One or the other of these men tries to justify his desertion. He points to his religious convictions, or argues that the renunciation of sex is an expression of a higher, more spiritual striving. But actually, this retreat from sex is never started voluntarily.

The overt homosexual usually does not marry a woman who expects normal heterosexual relations; the repressed homosexual does. Marriage becomes a necessity for him because it proves his normality; indeed, the comfortable closeness of the marital bed is seen as an antidote to the unrecognized but frightening urges.

Unfortunately this self – prescribed cure rarely works. Whatever it is that has turned a man’s sex interest away from females— marriage alone cannot turn it back. Such men may be good companions and good friends, but any effort on the wife’s part to overcome their sexual apathy is bound to fail.

One couple sought advice because (luring the 4 months of their marriage they had had intercourse only twice. The wife considered this abnormal. One day she indicated to her frigid husband that she longed for more than a chaste good-night kiss. He said he was tired and promised the fulfillment of her wish on Sunday morning. Sunday, he forgot.

When a week later she reminded him, he became impatient with her “demands.” The ensuing quarrel saved him from compliance, but not from fear and feelings of guilt. He began to dodge his wife’s presence. He stayed out late, busied himself at home and remained glued to the television set in the evening until he could assume that the wife was now asleep.

One type of man cannot warm up to his wife—or to any woman for that matter—because in every case he is fighting against his mother, a mother whose domineering control strangled his masculine development. Another man’s hope for love cannot be realized because he competes unconsciously with every woman he becomes involved with.

What is partly to blame is the fact that our civilization makes it very hard for a boy to become a man. psychologically. Not only must he suppress traits which in the past made men heroes—physical courage and forthrightness — but he must also subdue the masculine traits — aggressiveness and rebelliousness — in his make-up. If in these circumstances, feminine qualities such as submissiveness and gentleness are overzealously praised as virtues, the man-to-be can quite naturally become emotionly confused.

This is especially true where the mother is the all-mighty ruler of the home and where boys tend to look upon masculine traits as marks of inferiority. In the course of this development, the less stable and sturdy boys may give up aggressiveness altogether. Their security — mother’s love and approval — rests in passivity. This passivity tends to affect later sex relations.

To illustrate such a situation: a wife related that throughout their marriage her husband had never approached her sexually But he did not mind her attempts to stimulate him, and eventually she found out that she could have intercourse with him even though he remained passively lying on his back.

But recently the indignity of the situation struck her. For in the midst of this odd routine, he asked her irritably that at least she should not block his view of the television screen!

An even more serious situation results from an upbringing in which sex was singled out as the symbol of evil male aggressiveness. The types that come from such homes differ.

One of them in later years tries to justify his sexual coldness by preaching sexual self-denial as an ideal. Another tries to restore his sense of masculinity by channeling his vigor into his occupation, sports, or risky adventures. Sex, however, does not count.

When in a sub-sequent marriage, it becomes evident that the wife fails to appreciate this negative attitude, the man feels guilty and tries to make up for his frigidity by tendering her material offerings. One such man took on several jobs in order to afford gifts for his wife. Naturally, longer hours and harder work made it even more difficult for him to demonstrate his sexual passion.

When she told him that, he assured her that all he wanted was to make her happy. It was the wrong way, she explained, and if he kept neglecting her he would one day find her in another man’s arms. To this he replied, “If that makes you happy, honey, I won’t make a fuss.” The wife insisted she had heard a note of relief in his voice.

It has been asked why girls marry such men. Can sexual frigidity not be recognized before marriage?

It can be recognized, of course, but the prevailing confusion regarding sexual matters makes that difficult. A great number of girls are brought up in so sex-fearing an atmosphere that to them the very attitudes that doom the marriage to failure appear as desirable during the period of courtship and engagement.

Having been taught that virginity is a woman’s most valuable possession, they are happy that they need not defend it against a man’s aggressive desires. The frigid suitor does not attack their virtue. He is gentle and admirably restrained.

Alas, when after the wedding the young wife is allowed to admit and satisfy her sexual needs, the frigid young husband does not follow along because he himself has none.

Dr. Beigel, psychotherapist and former Assoc. Professor of Psychology, Long Island University, is author of “Sex From A to Z,” and editor of the Newsletter of the Society for the Scientific Study of Sex.