Mechanix Illustrated
Issue: Apr, 1952
Posted in: Cats, General
No Comments on From Cats to Cataclysms (Apr, 1952) 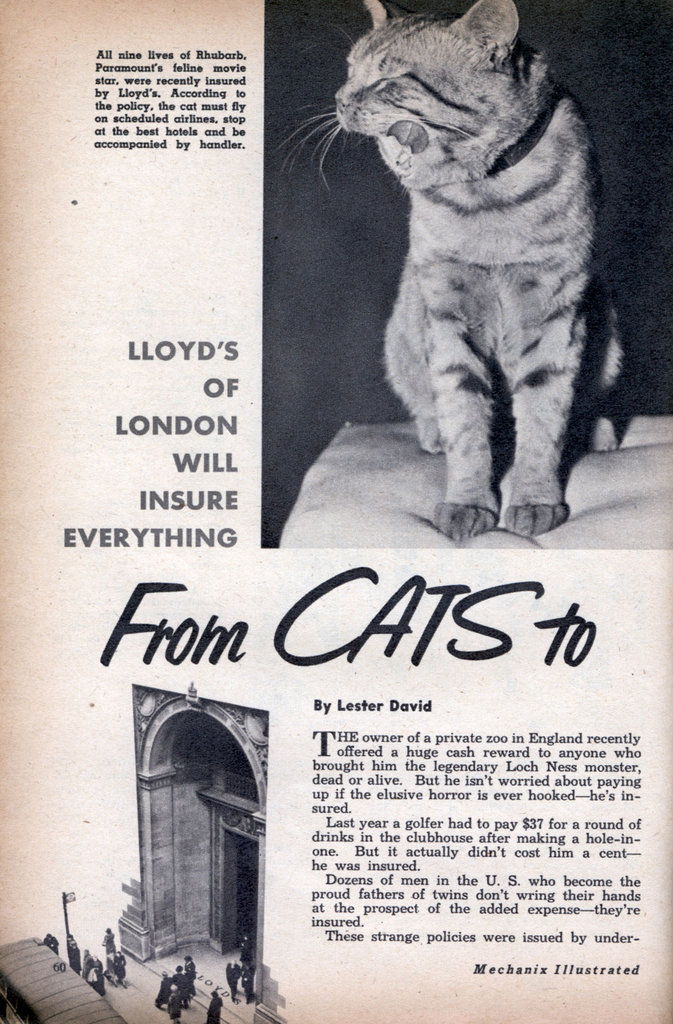 From Cats to Cataclysms

LLOYD’S OF LONDON WILL INSURE EVERYTHING

THE owner of a private zoo in England recently offered a huge cash reward to anyone who brought him the legendary Loch Ness monster, dead or alive. But he isn’t worried about paying up if the elusive horror is ever hookedâ€”he’s insured.

Last year a golfer had to pay $37 for a round of drinks in the clubhouse after making a hole-in-one. But it actually didn’t cost him a centâ€” he was insured.

Dozens of men in the U. S. who become the proud fathers of twins don’t wring their hands at the prospect of the added expenseâ€”they’re insured.

These strange policies were issued by under-writers for Lloyd’s of London, the fabulous, centuries-old British institution which will insure anything from cats to cataclysms, from actress’ bosoms to the San Francisco Golden Gate Bridge (for a record-breaking $40,000,000). Lloyd’s has issued policies on actors’ beards, dancers’ legs, models’ backs, surgeons’ hands and musicians’ lips. It will protect you, for a premium, against almost any eventuality which might cause you to lose moneyâ€” volcanoes, tidal waves, wars, foot-and-mouth disease, drought, snow, rain, insect plagues, sprinkler system leakage. You name it and they’ll write you a policy at Lloyd’s.

If you’re rich and afraid kidnapers might snatch your child, Lloyd’s will insure you for up to 90 per cent of any ransom money you might have to pay.

If you own a skiing resort and a mild winter keeps your slopes barren of snow, Lloyd’s will make sure you don’t lose money because of the adverse weather.

If you confidently expected your well-heeled maiden aunt to remember you generously in her will and you are struck suddenly by the horrible thought that she might marry and nudge you out of your inheritance, Lloyd’s will insure you against that dire possibility.

If you own anything that floats, from an ocean liner to a skiff, Lloyd’s will insure your vessel and its cargo.

The amazing Lloyd’s does business in the heart of old London in an imposing edifice, a far cry from the coffee house where it all started back in 1689. This is how it operates:

About 300 men sit in small, box-like stalls in a vast chamber which is called simply The Room. These are the underwriters, beside whom betting folk like Nick the Greek pale into insignificance. Their job is to calculate risks and issue policiesâ€” they are, in effect, making huge wagers that something will not happen. The underwriters represent brokers and syndicates who put up the cash and do business under the name of Lloyd’s. Lloyd’s itself doesn’t write any insuranceâ€”that’s done by the underwriters on behalf of some 2,000 individuals tied loosely together and trading under the world-famed name.

This is what happens when you want to take out an insurance policy at Lloyd’s:

Let’s say you are an inventor and you want to insure your hands. They are your livelihoodâ€”if anything happened to them, your income would halt You get in touch with a Lloyd’s correspondentâ€”there are hundreds in American cities. He corresponds with one of the 2,000 Lloyd’s brokers in London, who takes your request into The Room, joins the crowd around one of the underwriters, eventually gets his attention and presents your bid which he has written briefly on a sheet of stiff paper.

The underwriter must make a split-second decisionâ€”he has no time to weigh the matter thoroughly. He must be familiar with the hazards of inventors, as well as with the risk element involved in a dancer’s legs, dust-bowl farming, salmon fishing or practically anything anywhere. If he decides to accept the risk, he writes on the slip the amount he is prepared to insure and initials it. Then the policy is made out in Lloyd’s Policy Signing Room, where more than 100 girls turn them out at the rate of hundreds every hour.

The one point which governs the thinking of the underwriters is this: does the applicant have an insurable interest? That is, does he stand to lose something? Will his livelihood be affected if something happens?

Not long ago, for example, Lloyd’s underwriters saw a definite insurable interest in a hole-in-one on the golf course. By custom, in this country and England, anyone who performs golfing’s rarest feat must stand for a round of drinks in the clubhouse for all who happen to be on the premises. In England, the tradition calls for double whiskies, a not inconsiderable sum at the current price of $1.20 per.

Accordingly, underwriters decided that making a hole-in-one is a financial liability, hence insurable. The policy, which remained in force about two years, cost about $2.50 a year, and paid off at the rate of $40 maximum. One British golfer who bought the policy hit the jackpot twice in one season!

Lloyd’s even found an insurable interest in the eyes of Janis Carter, a pretty Hollywood actress, and the bosom of Evelyn West, California showgirl and dancer.

Janis’ studio claimed she possessed a pair of violet orbs which were the sexiest eyes in the world and asked Lloyd’s to insure them for $500,000. The policy was issued.

Evelyn had her comely bosom insured for $50,000, paying an annual premium of $122.22. Her application was accompanied by a number of photographs and the policy specifically described just what changes Evelyn’s figure must undergo as time goes by in order to qualify for a claim.

Paramount Pictures had an insurable interest in the famous movie cat, Rhubarb, Lloyd’s underwriters decided. They wrote a policy, amount undisclosed, insuring it against death or injury. The rules: Rhubarb must fly only on scheduled airlines, stop only at the finest hotels and be accompanied at all times by a trained handler. Attached to the policy are a number of identifying characteristicsâ€” his front and side photographs, a print of a paw and a sound track of his meow.

Lloyd’s has issued countless policies on legs over the years. The first to start the trend was Mistinguett, the French singer and dancer who still displays her gams in Parisian music halls, at an age variously estimated between 63 and 84. The shapely limbs of Mar-lene Dietrich are insured for $500,000, too. Gals aren’t the only onesâ€”Fred Astaire, for one, had his legs insured for $800,000.

Monte Wooley, the college professor who turned actor, had his beard insured at Lloyd’s for $20,000 against destruction by fire, theft, hail or tornado. He paid a $25 premium.

Only recently, Lloyd’s actually insured an entire contingent of troops going into battle. The Turkish government decided to send 4,500 officers and men to join the United Nations forces in Korea, but it was faced with a dilemma. The nation was not at war and if an accident occurred on the air trip to the fighting zone, according to Turkish law, the soldiers’ families would not qualify for pensions.

Therefore, Turkey applied to Lloyd’s for a policy covering the entire contingentâ€”and got it.

Many persons ask for policies but are turned down on that insurable interest angle. When a trumpet player had his lips insured for $350,000, his girlfriend wanted to know if she could have her lips insured. Claimed if anything happened to them, her boyfriend would up and leave her. The plan was turned down.

Lloyd’s once received a letter from a man who wanted to have his neck insured. Investigation produced the lamentable fact that said neck was about to be stretchedâ€”via the hangman’s noose.

There are a few things that cannot be insured, despite the obvious insurable interest. You cannot insure yourself against divorce, poverty, the loss of your job or killing anyone. Lloyd’s, moreover, will not insure Broadway producers against a flop play or newspaper publishers against dips in circulation. The underwriters do not issue life-insurance policies, but they do insure beneficiaries of such a policy against the possibility that the holder will commit suicide.

The amount of the premium you have to pay under a specific policy depends upon the circumstances of the particular case. Weather insurance comes high, usually between 15 and 20 per cent of the total sum involved, depending on the locality. Insurance against twins costs about four per cent, but may be higher if twins run in the family. You would have to pay about a three per cent premium for insurance against your child being born with a clubfoot or a harelip.

How about payoffs? Lloyd’s underwriters have been hit, and often, for sums ranging from tiny to terrific. They paid $350 to a Salt Lake City man whose son was born with a harelip and wrote checks totalling $5,000,000 after storms devastated large areas in Texas in 1943. The loss of the ill-fated Titanic, which sank after ramming an iceberg on her maiden voyage in 1912, cost the underwriters $4,000,000. When the frigate Lutina went down off the coast of Holland, carrying $6,000,000 in gold bullion, Lloyd’s paid off. Then there was the matter of a $5,000,000 insurance policy covering the cargo of the mer-chantship Egypt, which sank in 1922, its hold jammed with gold and silver.

Only recently, a surgeon in Kansas City stumbled and fell while cleaning a rifle. The gun went off and the bullet penetrated his foot, which had to be amputated. He collected $400,000.

When the famous racehorse Your Host was injured last year, suffering a shattered bone at Santa Anita during the running of the San Pasqual handicap, his owner got a Lloyd’s check for $250,000.

A Detroit laundryman hit the jackpot with twins and was heartened by a check for $1,000 shortly after. A New Orleans saxophone player suffered facial paralysis after an automobile crash and collected $200,000.

In England, during the last general election, the Liberal Party insured itself against the loss of the deposits it had to put up for its candidates. The law says that if a candidate does not ring up a certain number of votes, the party sponsoring him loses the sum it has posted. Well, Winston Churchill’s Conservatives washed out a lot of Liberals, but the party had one consolationâ€”it didn’t lose its deposits. Lloyd’s paid.

Lloyd’s was born in 1689, at the time when Britain’s merchant ships were .beginning to make their world-famed reputation. In Tower St., a genial tavern-owner named Edward Lloyd played host to London town’s more important traders and business men. As an accommodation for his customers, Mr. Lloyd began to gather news of ships reaching and leaving the Thames docks, news from abroad, wrecks and prices of commodities. Soon, the business men began to set up a form of insurance and the tavern was known as a center for marine insurance.

The tavern disappeared from the scene before long, but the merchants and their descendants remained together, moving from place to place, cementing their organization until the world knew that they were one of the most powerful factors in giving Britain’s merchant fleet an international reputation for reliability and safety. From just ship insurance, the underwriters branched out to cover the vast variety of risks they do today.

That’s the fabled Lloyd’s of London, one of the world’s unique institution. It’s the only place which will peel off $2,000,000 for the loss of an airliner without blinking an eyeâ€”and the next minute solemnly consider the application of a male model who wants to insure himself against growing bald.

But how about the famous Lloyd’s odds on war? Well, the last policy issued on such an eventuality covered last year. Since that time the War Risk Board of Lloyd’s, which meets periodically to change the schedule of premiums as conditions deteriorate and improve, has issued no new schedules. So the same ones stand. Take ’em or leave ’em, the odds on war as quoted by the fabled Lloyd’s of London are 50 to 1.