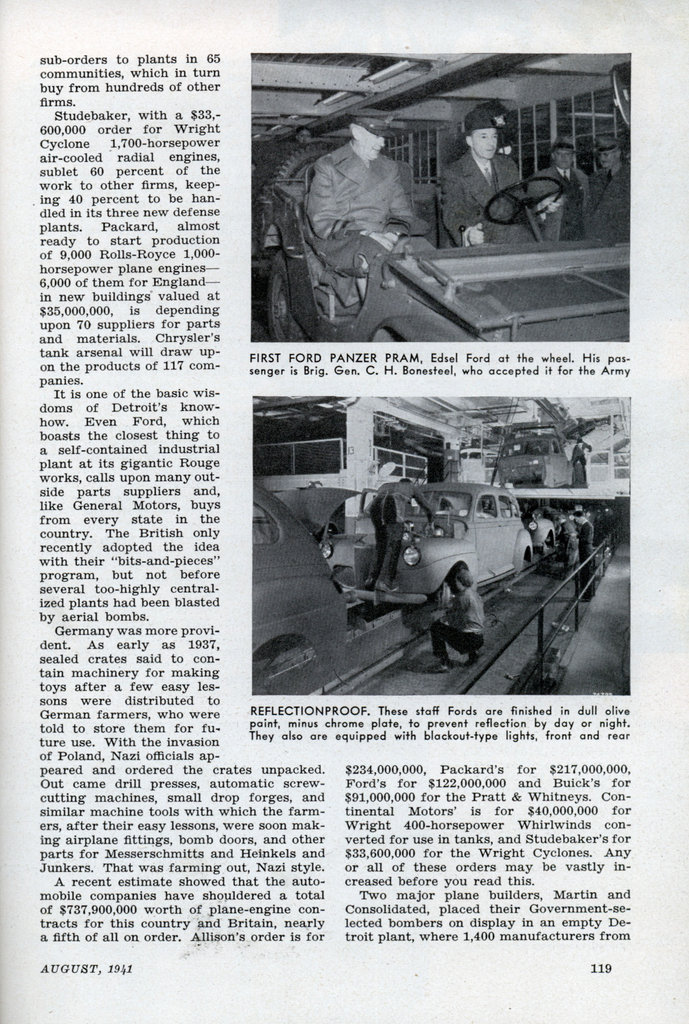 Mass production in all lines was the demand. It would seem to be enough to strike any group of industrial engineers dizzy. Dizziness is more or less a normal state, however, for an industry accustomed to redesigning its major output every year, and the Detroit industrialists proved themselves tops. They turned out to be steadiest when spinning madly.

There were factories to be built whose individual dimensions are reckoned in fractions of a mile. The grandparents and the great-uncles of the machines which were to turn out the new products had to be found or manufactured in widely separated parts of the country, assembled and put to work so that their grandchildren and grandnephews and nieces would be ready for installation when the factories were completed. There were materials to be ordered in stated quantities for delivery at set dates so that the vast jig-saw puzzle would fall progressively into place and when the final rivet and the last nail was driven in Detroit, machines and materials would come marching into each building.

Between last summer and this summer fourteen acres of farmland sprouted the gigantic mushroom of the Chrysler tank â€¢ arsenal, a vast structure of steel, glass, and brick which is a trifle more than a quarter of a mile from wall to wall. Atmospheric haze dulls the vision of the spectator seeking the details of the farther end.

Freight trains enter the building at one side and unload at the head of sub-assembly lines which stretch like the bars of a gridiron crossways of the plant. Huge grotesque machines with arms and angles reminiscent of Rube Goldberg or a non-objective painter stand in ranks beside the sub-assembly lines, which terminate in three assembly lines on the far side of the building where the tanks take form, five of them in each eight-hour shift.

Another spectacular achievement was the Ford defense plant, literally a hothouse growth. Work on it was started September 17, 1940. Detroit winters forbid masonry construction, but Detroit genius was not to be balked. An engineer who had encountered a similar difficulty on an assignment in northern Russia inclosed the entire job in a shelter of fiber board and tar paper and installed steam heat. Twelve hundred men worked three shifts a day in it and by April the first of 4,236 Pratt & Whitney twin-row, radial, air-cooled engines were coming off the assembly lines. Now the 1,750 and 2,000-horsepower engines are taking to the air.

Similar miracles were wrought by Packard, Studebaker, Hudson, General Motors, and other industrial wizards. Minor miracles were being performed all over the country by the makers of machine tools whose powers had been invoked by Detroit. That industry had doubled in size in a year, constructing for its own use more machines than it had turned out in any of the years between 1931 and 1934.

The Detroit manufacturers always have been in the market for completed parts and knew the necessity of scheduling such orders in advance. Every year Buick buys 2,200 separate production items and General Motors has 20,000 industrial and supply firms on its list of sub-manufacturers. The purchasing and associated engineering staffs always have maintained the closest relations with these sources of supply and hundreds of their members were assigned at once to the job of stepping up and broadening production. They have kept to their schedule.

General Motors’ Allison Division, currently making more than 400 12-cylinder, liquid-cooled, 1,000-horsepower plane motors a month in its defense-built Indianapolis plant, and anticipating 1,000 a month by December, put into effect a vast “farming-out” program to achieve this goal. Its purchasing agents distributed major sub-orders to plants in 65 communities, which in turn buy from hundreds of other firms.

Studebaker, with a $33,-600,000 order for Wright Cyclone 1,700-horsepower air-cooled radial engines, sublet 60 percent of the work to other firms, keep-ing 40 percent to be handled in its three new defense plants. Packard, almost ready to start production of 9,000 Rolls-Royce 1,000-horsepower plane enginesâ€” 6,000 of them for Englandâ€” in new buildings valued at $35,000,000, is depending upon 70 suppliers for parts and materials. Chrysler’s tank arsenal will draw upon the products of 117 companies.

It is one of the basic wisdoms of Detroit’s know-how. Even Ford, which boasts the closest thing to a self-contained industrial plant at its gigantic Rouge works, calls upon many outside parts suppliers and, like General Motors, buys from every state in the country. The British only recently adopted the idea with their “bits-and-pieces” program, but not before several too-highly centralized plants had been blasted by aerial bombs.

Germany was more provident. As early as 1937, sealed crates said to contain machinery for making toys after a few easy lessons were distributed to German farmers, who were told to store them for future use. With the invasion of Poland, Nazi officials appeared and ordered the crates unpacked. Out came drill presses, automatic screw-cutting machines, small drop forges, and similar machine tools with which the farmers, after their easy lessons, were soon making airplane fittings, bomb doors, and other parts for Messerschmitts and Heinkels and Junkers. That was farming out, Nazi style.

Two major plane builders, Martin and Consolidated, placed their Government-selected bombers on display in an empty Detroit plant, where 1,400 manufacturers from all over the country studied them. Most reported that they could supply some of the parts.

As a result, Chrysler was given orders for the two forward sections of the twin-engine Martin B-26 fuselage, which it is building in the Graham-Paige plant. Hudson is making the rear section and small parts. Goodyear, pending plant construction, is making the wings in its gigantic “air dock” at Akron, where a special ceiling had to be built to prevent condensed moisture from “raining” on the work.

General Motors’ Fisher Body Company is expanding its Memphis, Tenn., plant for construction of the North American-designed B-25 bomber, a type similar to the Martin. Ford is rushing an $11,000,000 factory near Ypsilanti, Mich., for complete four-motor Consolidated B-24 bomber airframes.

Detroit reaches down into its bag of tricks and comes up with new wonders like the Allison aircraft and Packard marine engines. Another engine tapped for defense duty and as adaptable is the product of the Cleveland Diesel Engine Division of General Motors. Actually, it is not so much an engine as it is two cylinders. One is comparatively small, with only 71 cubic inches displacement. The other is largeâ€”567 cubic inches. Just these two are made by the company. Yet they are the power packages for engines ranging in horsepower from 15 up to 1,600, and they can power anything from portable lighting plants to the biggest submarines.

Uncle Sam has ordered Diesels using these cylinders to the tune of $140,000,000, principally for the Navy. The engines are about one quarter the size and weight of the Diesels that powered American submarines in the First World War. They more than double the cruising range of the earlier submarines, and their weight, space, and fuel economies step up the value of Navy tugs, patrol boats, fuel transports, and other vessels. Many believe that these amazing two-cycle, relatively high-speed Dieselsâ€”installed in large numbers in a single hullâ€”will power a radical new American battleship.

Some 13,000 military vehicles a month are being built by the automobile industry, with 195,000 already delivered and 60,000 others scheduled for early delivery.

In addition to 5,900 passenger cars and 27,000 motor cycles, the vehicles ordered are 4,500 quarter-ton scout cars from Ford, Bantam, and Willys; 69,000 half-ton pick-up and reconnaissance trucks from White; six-ton and heavier units, from Autocar, Bied-erman, Chevrolet, Corbitt, Diamond-T, Dodge, Federal, G.M.C., International-Harvester, Mack, Marmon-Herrington, Reo, Sterling, and Walters. Practically all military trucks are four-wheel drive, many are six, and others are half-track. The total does not include 37,800 trailers for 2-1/2-ton trucks, being built by Nash.

And the defense articles of Detroit stretch on and on: gun and torpedo parts for the Navy, bomb and shell components, field kitchens, field range cabinets, antiaircraft fire-control apparatus, instruments, aviation spark plugs, radio parts. For many of these, the industry’s parts and equipment makers account. Typical are the Briggs, Fisher, and Murray car-body builders, the huge wheel and brake-drum makers such as Kelsey-Hayes Wheel, Budd Wheel, and Motor Wheel, and the Bendix Products Division of Bendix Aviation.

The War Department is watching with an eye to the future the Detroit research laboratories. Most startling appears to be the simultaneous development in each of the Big Three laboratories of new airplane engines to develop from 1,500 to 2,400 horsepower. All three projected engines are liquid-cooled, in-line types. Ford’s is a 12-cylinder, V-type power plant with an exhaust-driven supercharger, and fuel injectors instead of carburetors. In construction, the cylinder liners, crankshaft, and other major parts will be made by a new “centrifugal-casting” method which is claimed to be faster, cheaper, and to produce stronger parts than conventional forging and machining methods now employed.

Chrysler and General Motors are more secretive. Reports are current, however, that Chrysler’s engine will make better mechanical use of extremely high-octane fuel than any engine yet devised. The G.M. design is a conversion of the Allison, using four banks of cylinders arranged in a W instead of two in a V as at present.

Engineers in one General Motors plant designed a multiple drill that bores out six machine-gun barrels at onceâ€”a feat not even the old-line gun makers had accomplished. A Chrysler research group designed a new plane landing gear which could be built faster than present types. The list of defense orders placed with the industry looks like a dozen pages from your telephone book, and the cost figures mean about as much. Because new contracts are coming in so fast, totaling their value is next to impossible. Some recent official figures out of Washington put the industry’s defense contracts at $1,076,082,000, but it is estimated that they are by now above the billion-and-a-half mark, with no end in sight. That’s a lot of money to pay even for Detroit’s know-how. Yet no one has complained but Detroit, where the only thing they’d rather do is build new and better automobiles.