Popular Mechanics
Issue: Feb, 1935
Posted in: Automotive
Tags: how its made
1 Comment on From DRAWING BOARD to PROVING GROUND (Feb, 1935)

From DRAWING BOARD to PROVING GROUND (Feb, 1935) 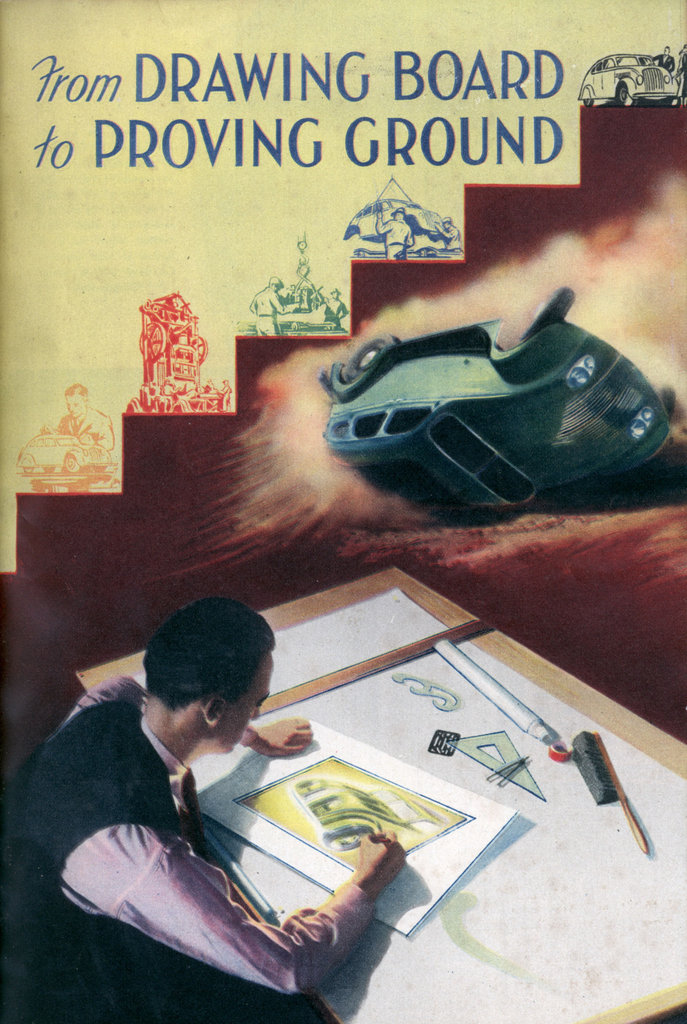 From DRAWING BOARD to PROVING GROUND

WHEN a “flock of geese” turned out to be a fleet of airplanes, an idea was born in the mind of an engineer. And that idea led to the development of an entirely new design for automobiles.

Ever alert for ideas that may result in a more efficient motor, a better brake or a safer steering system, the engineer usually is the first to catch a vision of what is to come. Then, from its conception in the engineer’s brain, every new car and every part in it traces a trail of trial and error over the drafting board, through wind tunnel and precision tests, to the proving ground and Anally into actual production.

The “wild goose” incident occurred in 1927 as Carl Breer, Chrysler Corporation engineer, drove along a Michigan highway. The fact that he had mistaken the planes for geese started the engineer to thinking about aerodynamics. He looked at his boxlike car of that year and saw, not the automobile he was driving, but a motor car built like an airplane to move through the air with a minimum of wind resistance.

Impressed by his vision, the engineer tried a simple experiment. He thrust his hand out of the window of his car, palm to the wind. The wind snapped his arm back. But when he turned the side of his hand to the wind, the air currents flowed smoothly around it. Breer took his lesson from the “geese” back to the engineering laboratories and just seven years later, an automobile of “airflow” design was introduced to the world.

When an engineer catches such a vision, he takes his problems of design to a corps of draftsmen. Every automobile company employs a number of skilled men who draw hundreds of sketches of new cars and parts as the next year’s model is prepared. The draftsmen are always working on new ideas and usually they are years ahead of the other factors that enter into the “birth” of a new car. Executive engineers follow closely the work of the draftsmen. When a designer has completed a particular assignment, clay and wax sculptors mold tiny models according to specifications of the approved drawings.

From the sculptors, the models go to small wind tunnels and other testing devices. While its creators carefully check the results, each tiny car is subjected to the wind tunnel test to determine how it resists air currents. If the test is satisfactory, with wind resistance low, the models are turned over to other engineers who work out specifications for a full-size car and all its parts and from these new specifications is built by hand the first car of its kind. New engine developments and all the mechanical improvements available are incorporated into the “baby” to make it a husky forerunner of the new line. Finally, the car is ready for exhaustive tests on a secret proving ground. If the results are satisfactory, the “go” signal is flashed to the factory and to parts makers. Workmen are called to body plants and to engine assembly lines. Steel starts moving in from the foundries.

Assembled bodies move down huge conveyors to paint-spraying booths, through baking ovens to the trim and polishing lines, thence to the final assembly line. Engine production starts simultaneously with operations in the body plant. Machines, almost human, bore all of the cylinders in a block at one operation. The blocks move slowly between two lines of workmen until the finished engine emerges for a two-hour test run on a block and to be subjected to a device that shows the amount of horsepower.

Final assembly starts with the chassis, which is lowered to the line from a conveyor. As the chassis moves down the line slowly, workmen on either side perform assigned tasks. Springs are added, wheels go on. The engine is swung into place. The body is lowered and bolted on. Electricians add the lights and test them on a screen hanging across the moving line. Then between rows of inspectors, the car moves to the other end of the plant and out to the public.

The engineering laboratories of an automobile company are never idle. Engineers are working all the time on improvements for every part of the new cars, each engineer being assigned to some particular part of the car. For instance, an entire corps of engineers in one laboratory has been working for years on new transmission developments. When completed and deemed practical, these developments go into the new models.

In the laboratories, thousands of tests are conducted each year. Every new improvement is subjected to the most severe tests known, for efficiency, for wear and for performance in the hands of the driving public. New engines are tested under all kinds of temperatures, from oven heat to “cold room” weather of fifty and more degrees below zero.

To put any radical department from conventional design into actual production, factory engineers make special preparations. A training school is opened for welders and metal finishers. Perhaps, as in the case of the “Airflow” DeSoto, the design calls for large steel stampings for which methods of production and handling must be worked out. A new welding operation, called hydromatic welding, was devised to handle these large stampings and a new type welder, operated by oil at 600 pounds pressure, was developed. It completes as many as fifty spot welds in ten seconds when a button is pressed.

An innovation in automobile factory practice is the air “curtain,” consisting of controlled drafts of cleaned, filtered and tempered air, flowing through paint-spraying booths to protect the workers from irritating paint fumes. The three to six-inch curtain, flowing downward to within a few inches of the floor, is maintained by large electric fans.

(Watch for “Breaking Them Up to Make Them Better” in next month’s color section.)