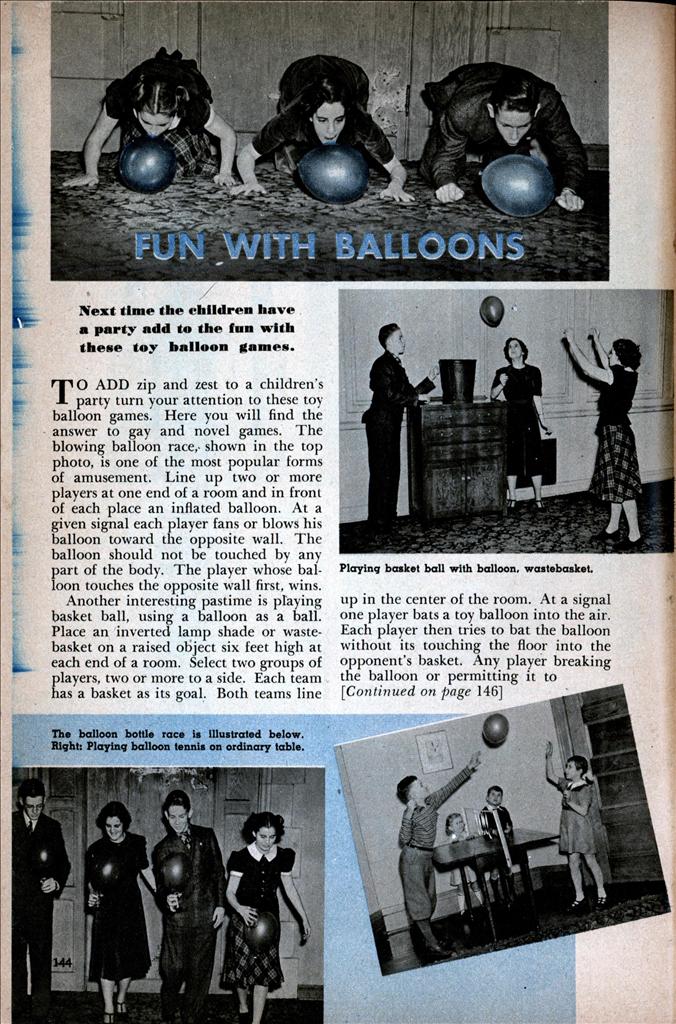 Next time the children have a party add to the fan with these toy balloon games.

TO ADD zip and zest to a children’s party turn your attention to these toy balloon games. Here you will find the answer to gay and novel games. The blowing balloon race, shown in the top photo, is one of the most popular forms of amusement. Line up two or more players at one end of a room and in front of each place an inflated balloon. At a given signal each player fans or blows his balloon toward the opposite wall. The balloon should not be touched by any part of the body. The player whose balloon touches the opposite wall first, wins. Another interesting pastime is playing basket ball, using a balloon as a ball. Place an inverted lamp shade or waste-basket on a raised object six feet high at each end of a room. Select two groups of players, two or more to a side. Each team has a basket as its goal. Both teams line up in the center of the room. At a signal one player bats a toy balloon into the air. Each player then tries to bat the balloon without its touching the floor into the opponent’s basket. Any player breaking the balloon or permitting it to touch the floor is disqualified. The team scoring the greatest number of baskets in two five-minute periods, wins.

A balloon bottle race is another well-liked game. At one end of the room line up your guests against the wall. Furnish each of them with a one-pint milk bottle and a large, round inflated balloon. At a given signal each player ‘ balances his balloon on the mouth of his bottle and begins walking toward the other end of the room. If a balloon drops from the mouth of a bottle that player must stop and replace the balloon before proceeding further. The player who reaches the opposite end of the room first, wins.

The game of tennis can also be adapted for balloons. Stretch a string approximately 12 in. above a table. Select one or two players to a side. Inflate a small balloon. One player serves the balloon over the string to his opponents using his hand as a paddle. The opponents return the balloon in the same manner. Should either side catch, hold, hit the balloon under the string or off the table, a point is scored for the opposing side. The side scoring 21 points first, wins.