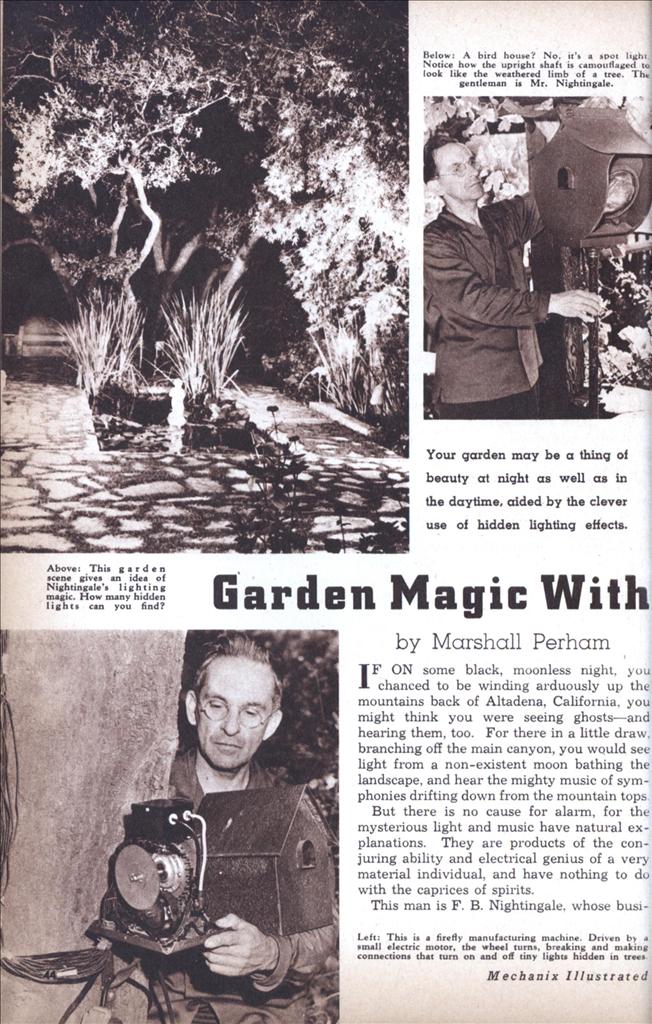 IF ON some black, moonless night, you chanced to be winding arduously up the mountains back of Altadena, California, you might think you were seeing ghosts-—and hearing them, too. For there in a little draw, branching off the main canyon, you would see light from a non-existent moon bathing the landscape, and hear the mighty music of symphonies drifting down from the mountain tops But there is no cause for alarm, for the mysterious light and music have natural explanations. They are products of the conjuring ability and electrical genius of a very material individual, and have nothing to do with the caprices of spirits. This man is F. B. Nightingale, whose business is illuminating outdoor gardens in such a manner that the source of light is invisible, but the rays reveal and increase the natural beauty of flowers and shrubs. This canyon is his “demonstration room,” located just above his studio plant. Prospective customers may sit on the spacious veranda below, listen to music from loudspeakers he has installed on the hill side, and watch while he works magic tricks with light.

An unusual combination of professions has given Nightingale the ability to perform his astounding feats. In childhood he studied conjuring, and later went on the stage as a magician. This taught him how to deceive the eye—what persons may look at and not see, and what they are likely to think is something entirely different from what it really is.

Leaving the stage, he was employed for years by a large electrical concern, traveling all over the world, solving electrical problems, installing lighting systems. Came the depression, and he took the all too familiar trail into limbo.

Unemployment, rather than being a tragedy, gave him just the chance he wanted to experiment with some electric lighting inventions he had in mind for producing unusual effects. A dwindling bank account furnished plenty of incentive.

His theory was that there should be no visible source of light in a garden, for then the eye would be automatically drawn to it, and not to the garden’s natural beauty. Therefore, he set out to make invisible fixtures.

Suppose we stroll through one of the southern California gardens where he has installed permanent lighting equipment. First sight to meet our eyes is a fine piece of statuary, bathed in light, but clothed in dark- ness. Where is that light coming from? You would never guess, but a spotlight is concealed in that bird house in a distant tree.

And the tree itself—look at the fireflies in it! But no, they are not living fireflies. They are tiny lights, each carefully wired, and all controlled from a central switch box, also hidden in a bird house. A wheel turns slowly in this switch box, making and breaking contacts, and gives the flashing effect of a tree full of fireflies.

Farther down the garden is a fish pond. Floating placidly on it are a couple of lily pads. Even as you look, a fountain springs upward from one of them, while from deep inside, a flood of light, changing slowly to reds, blues, and yellows, illuminates the cascading water. The other lily pad too is giving off colored illumination, invisible from above, but lighting the water so the fish can be seen swimming about.

There now is a bed of roses, an oasis of light and color in the darkness. The source of light? Potted plants, hanging overhead, are in reality electrical fixtures. Light falls from them upon the roses, just as it falls from a reading lamp upon a printed page.

Even the grass under your feet is clearly visible. How? Why, tiny wren houses, swinging from the branches of trees, have small but strong lights on their under sides. You can see the illumination, but not the lights themselves, until you get directly underneath.

Walls covered with creeping plants, 01 massive hedges, are outlined faintly against the dark sky. Here again one cannot discover where the light comes from. But potted plants, sitting on pedestals are the source. From the front, the pedestals look very solid. In back, they are cut away, exposing a vertical light tube.

Switches too are often concealed—anything you touch may unleash a flood of light. Here is a rose bush. Squeeze a bud, and the blossoms are illuminated. It is not a real rose bush, to be sure, but you would never suspect that. Over here is a cat tail—that is, from the front. Hidden in it is a light that illuminates a little nook in the wall. There is no limit to the hidden lights you may discover in such a garden. The boundaries are fixed only by the boundaries of Nightingale’s inventive genius.

His brief period of unemployment, when he was enabled to work out his ideas, indeed was a blessing in disguise. His fixtures have been installed in a great many fashionable southern California gardens, and even in many less fashionable.

In addition, he does extensive rental business. Garden parties in this warm, subtropical climate are very desirable. He makes them more so with his beautiful, mysterious illumination. He has lifted lighting out of the Chinese lantern era, and utilized advances of the Twentieth Century.