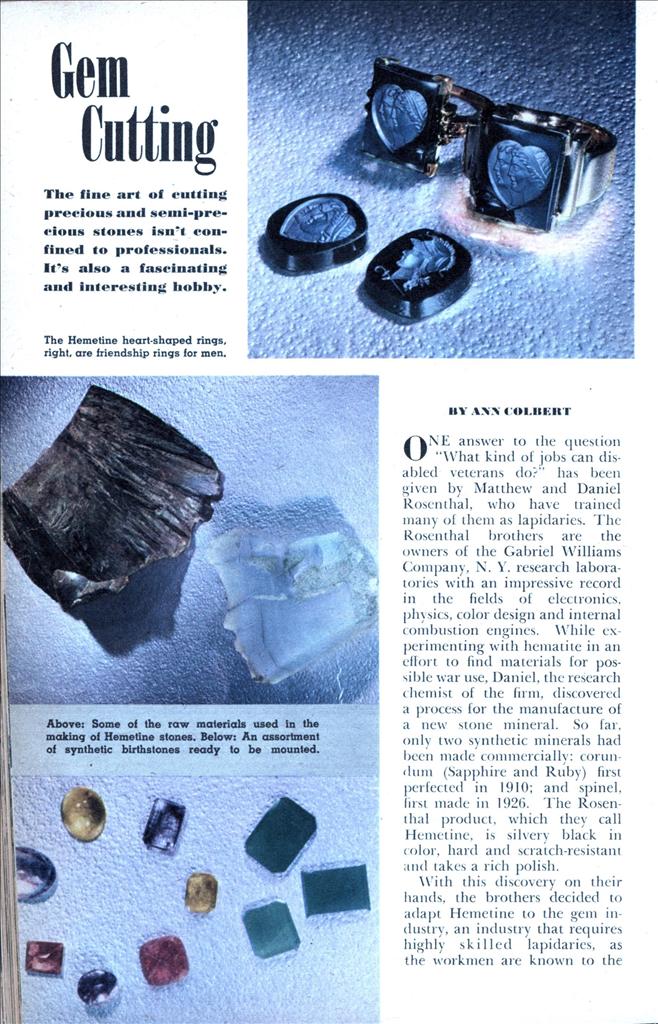 The fine art of cutting precious and semi-precious stones isn’t confined to professionals. It’s also a fascinating and interesting hobby.

ONE answer to the question “What kind of jobs can disabled veterans do?” has been given by Matthew and Daniel Rosenthal, who have trained many of them as lapidaries. The Rosenthal brothers are the owners of the Gabriel Williams Company, N. V. research laboratories with an impressive record in the fields of electronics, physics, color design and internal combustion engines. While experimenting with hematite in an effort to find materials for possible war use, Daniel, the research chemist of the firm, discovered a process for the manufacture of a new stone mineral. So far. only two synthetic minerals had been made commercially: corundum (Sapphire and Ruby) first perfected in 1910; and spinel, first made in 1926. The Rosenthal product, which they call Hemetine, is silvery black in color, hard and scratch-resistant and takes a rich polish.

With this discovery on their hands, the brothers decided to adapt Hemetine to the gem industry, an industry that requires highly skilled lapidaries, as the workmen are known to the trade. The art of gem cutting was carried on for centuries in Europe. The technique was a closely guarded secret, like radar or the atomic bomb, and for generations fathers handed it down to their sons.

Hiring an expert gem cutter, the Gabriel Williams Company opened their first lapidary workshop a little over a year ago in New York. Here the secrets of gem cutting were shown to budding lapidaries, war veterans for the greater part, many of them too disabled to fill a job that required standing on their feet. Today the trainees of yesteryear are full-fledged lapidaries. Hemetine has made such a hit with the jewelry trade, particularly as a setting for men’s rings, that the Gabriel Williams Company has already opened two additional plants, one in Pennsylvania and one at the West Coast, constantly training additional lapidaries.

We called at the Gabriel Williams Company, asked them to tell us how to go about cutting gem stones. You may nor want to make this art your career, but you can learn to cut gem stones as a hobby, and you will have lots of fun doing it.

There are two kinds of gem cutting: facet cutting and cabochon culling. For the amateur lapidary, we recommend cabochon cutting, which is much easier to learn.

You don’t need much equipment to take a crack at this art. To start, you’ll do nicely with one 14 h.p. motor, two grinding heads (one for grinding, one for polishing), two silicon carbide wheels (one No. 120 grit, one No. 220 grit), one sander, one polishing wheel, polishing powder, dop cement and some silicon grinding compound.

Your raw material literally lies around, and if you ever had a mineral collection when you were a kid, you’ll have no difficulty finding suitable pieces—on beaches, in rock quarries, in river beds, in the desert. Best material for a beginner to use is quartz. Amethyst, topaz, crystal, onyx, carnelian, bloodstone, agate, tiger-eye, chalcedony, chrysoprase are all members of the quartz family. Petrified wood of the “picture” variety is excellent. But if you can’t tell a topaz from a pebble, get your gem cutting material from one of the numerous lapidary supply shops. And don’t try sawing a big hunk of a stone until you have some experience in grinding and polishing. Rather, buy the cabochon blanks from a dealer who will send them to you already sawed into handy sizes and flattened.

To decide which side of the stone is going to be the top and which one the bottom, dip the stone in oil (this increases its translucency) and hold it up against a strong light. Any imperfections will now show up clearly, and you will use the best side as the top side. Mark the shape to which you want to grind your gem on the bottom of the cabochon blank. You can do this either with a pencil, or better still with a piece of aluminum wire which will not wash or rub off. Another way to get a stone to the desired shape is to use a template: cut a pattern out of cardboard and paste it on the bottom of the stone.

Before starting out to grind, mount the stone on a “dop” stick. This is a round wooden stick, about 4-in. long. By dopping the stone, you will be able to handle-it more easily. The stone is fastened onto the dop with dopping cement. Warm your stone to a temperature at which you can comfortably hold it in your fingers. Heat the cement and dip the dop stick into it, coating it for about of an inch. Apply a coating of cement to the top of the stone. Reheat the cement on the stone and on the dop stick until they both get to a melting point, and press the stone, bottom up, onto the dop. Keep the cement away from the edge of the stone by molding it with damp fingers. Let cool off completely before you begin work.

One more thing before you start: You can work on either a horizontal or vertical running wheel, and either on the surface of the wheel or on the outside edge, the periphery.

Your first step is grinding. Start with a No. 120 silicon carbide wheel and run at a speed of about 1750 r.p.m.. if you use a 6-in. wheel. The larger the wheel you use, the less revolutions are required. While grinding, moisten the wheel with water. Keep the stone in constant motion while holding it against the wheel, rotating it in your fingers. After you have attained the desired shape, bevel the edge by giving it a slight slant from the outside toward the inside.

Remove the stone from the dop stick by melting the cement. Turn it over and mount it, this time with the top up. Be sure you set the stone completely straight on the dop stick. Still using the No. 120 grit wheel, you now shape the crown of the stone. Be careful not to slope the sides too abruptly and not to cut into the bevel. When you have the desired shape, use the No. 220 grit wheel and continue grinding until all blemishes are eliminated.

Next step is sanding. The sander is a wooden disk about 1-1/2-in. thick, covered with a sanding cloth over a layer of either felt or sponge rubber. Sanding is done without water, at a speed of about 1000 revolutions per minute for the 6-in. wheel. Spend plenty of time on the sanding, but be careful not to get the stone too hot because it might soften the dop cement. All the deep scratches left by the grinding wheels on the surface of the stone should be eliminated by this process. The finer you sand your surface, the easier the next step-polishing—will be. ‘When the stone is completely smooth, wash it well (also the dop) to remove any grit.

The final step is polishing. Your polishing wheel can be either a wood drum covered with felt, or a muslin buff. Use a speed of 900 revolutions per minute with the 6-in., and keep your buffer wet. Use any polishing powder your lapidary store recommends and follow their directions for mixing with water.

Now remove your shiny jewel from the dop stick. To take off the excess cement, use a cloth with alcohol, acetone or turpentine. Finished stone can now be mounted in a ring setting or other jewelry.

table of hardness Hardness of a stone means scratching ability. A stone can be scratched by another of equal or higher hardness. The abrasive used in cutting stones has to be of greater hardness than the stone. Here are some standards of hardness: Talc… 1 Fingernail… 2-1/2 Calcite… 3 Window Glass… 5-1/2 Steel File .. 6 to 7 Feldspar… 6 Quartz… 7 Topaz… 8 Corundum… 9 Diamond… 10 Stones above 7 hardness are considered very hard.

BIRTHSTONES Since time immemorial people have believed that a special stone was dedicated to each month of the year, and that the stone of the month is endowed with certain powers for those born in that month. There are any number of birthstone lists, none quite like the other. The list we give you below is one on which most of the gem experts agree. (Figures in parentheses signify hardness of stone.) January, Garnet (6-1/2 – 7-1/2)—Endows the wearer with constancy and fidelity.

February, Amethyst (7)—From the Creek: Without drunkenness. Keeps wearer from intoxication.

May, Emerald (8)—Emblem of love and immortality. Was used to prevent epilepsy and eye trouble.