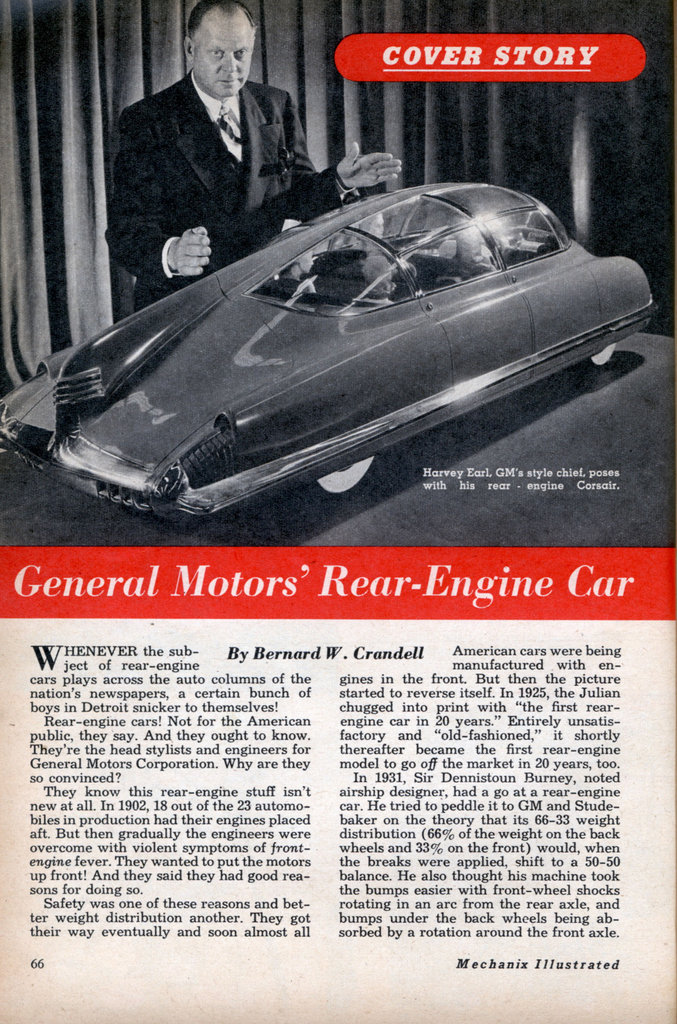 WHENEVER the subject of rear-engine cars plays across the auto columns of the nation’s newspapers, a certain bunch of boys in Detroit snicker to themselves!

Rear-engine cars! Not for the American public, they say. And they ought to know. They’re the head stylists and engineers for General Motors Corporation. Why are they so convinced?

They know this rear-engine stuff isn’t new at all. In 1902, 18 out of the 23 automobiles in production had their engines placed aft. But then gradually the engineers were overcome with violent symptoms of front-engine fever. They wanted to put the motors up front! And they said they had good reasons for doing so.

Safety was one of these reasons and better weight distribution another. They got their way eventually and soon almost all American cars were being manufactured with engines in the front. But then the picture started to reverse itself. In 1925, the Julian chugged into print with “the first rear-engine car in 20 years.” Entirely unsatisfactory and “old-fashioned,” it shortly thereafter became the first rear-engine model to go off the market in 20 years, too. In 1931, Sir Dennistoun Burney, noted airship designer, had a go at a rear-engine car. He tried to peddle it to GM and Stude-baker on the theory that its 66-33 weight distribution (66% of the weight on the back wheels and 33% on the front) would, when the breaks were applied, shift to a 50-50 balance. He also thought his machine took the bumps easier with front-wheel shocks rotating in an arc from the rear axle, and bumps under the back wheels being absorbed by a rotation around the front axle.

If this sounds screwy, it’s typical of some of the inspired double-talk that has been going on ever since the revival of the rear-engine ruckus.

The Burney design, which went whole-hog on radiators with one in back to cool the engine and another in front to heat passengers, was sold eventually to the British Crosley. They came out with a $3000 sedan which set no sales records.

An experimental rear-engine design made its appearance in 1933. John Tjaarda, a Detroiter who designed two experimental models for the Briggs Manufacturing Company, claimed it was ridiculously simple to drive. He explained in the magazine Automobile Topics: “When starting, all one has to do is turn on the ignition, when a red light will show on the dash. Then step on the throttle which simultaneously starts the engine and the red light will go out and a green light shows. As the engine can not be heard in the front seat, the lights will tell what is happening in the rear.”

Tjaarda’s cars caused a mild sensation in the industry for a year or two. Then Chrysler and Ford, potential customers for whom Briggs already made bodies, had to decide whether the sensation was good or bad. The freaks had V-8 engines mounted over the rear axles and buzzed through the streets of Detroit without mishap until winter arrived. The original notion was that the engine heat could not seep forward and cause discomfort during hot weather. As it turned out, passengers were cool enough in summer, but during the winter they froze. No heating system had been devised!

Most unconventional and probably most comfortable of all interiors in a rear-engine experiment was brought out several years before World War II by William B. (Bill) Stout. He first achieved engineering fame by building the first all-metal airplane. In 1934, Stout showed up with a living-room on wheels. There were broad back seats, three chairs which could be moved around and a comfortable chair for the driver. A drop-down bed and a table completed the ensemble. Stout planned to build 100 of these cars the following year. Instead of launching production, however, he refined the job into a newer model called the Scarab. It got a good press but never got any farther down a production line. One reason alone was enough to kill the ideaâ€” it would have had to sell for $5000. In 1938, Emile E. C. Mathis, French motor manufacturer, and Axel Wenner-Gren, Swedish industrialist, announced plans to build in France, Sweden, England and the U. S. a small car with a radial engine in the rear. It would be “designed to give 50 to 60 miles on a gallon of gasoline.” In this country they hoped to sell the car for $500 but the War interrupted their aspirations and the car never got into production.

Several other European pre-war designs for rear-enginesâ€”the English Crosley, the German Mercedes-Benz, Czech Tatra, Italian Isotta-Fraschini, French Renault and Hitler’s Volkswagenâ€”got along well enough by European standards. But that was principally because their size, speed and styling were so far under American par for the production line that major problems didn’t develop. Most of the small cars with little horsepower couldn’t go fast enough to get the front-end sway. Engine-cooling was of so little consideration that in the 8-hp Renault, for instance, the radiator was behind the engine.

Then, of course, came Tucker with his plans for a posterior-powered jalopy with more trunk space, more power, better vision, more safety, better brakes, better styling, etc., at the same cost as a conventional auto. But production-line Tuckers still haven’t made their appearance for genreal distribution and it looks like Tucker’s dream won’t come true (at this writing, anyway).

One day in 1946, an automobile that appeared to be an ordinary Pontiac sedan stopped at the New York mouth of the Holland Tunnel to pay the toll before proceeding to New Jersey. The attendant, casually preparing to charge the regular fare, let his gaze wander downward. He stopped short! The car had twice as many rear wheels as an ordinary private car. Like a bus, he thought. So he upped his fee to the bus categoryâ€”a few cents more.

This special six-wheel rear-engine job, put together in New York for General Motors, has since been driven, dissected, patted, pooh-poohed and praised by scores of engineers.

Results? The tests kindled some enthusiasm. Its dual tires had unusually good traction on any kind of road surface. On snow, ice or gravel it performed better than others. It didn’t “fishtail” on slippery surfaces while gathering speed. The light front end made steering easy, without the tires side-slipping on a sharp turn. But that’s about where its advantages stopped.

What are some of the arguments against the rear-engine design? One of the principal ones is weight distribution. With the heavy motor over the rear axle, the center of gravity of the car is shifted to the rear. This means that when not under complete control, the car will have a tendency to turn around and travel backwards, like an arrow shot tail-first. When skidding on ice, for example. Then, too, in case of an accident, the heavy rear moves forward, telescoping the car and its occupants. Even the rear-engine boys recognized this. In almost all models, the front hood has been retained.

The driver, in his perch way up front, is minus the protection of the heavy engine and its frame, it is claimed. Steering will not be as positive since not enough weight will bear down on the front wheels. Engine cooling, too, is another problem.

What can be said in favor of the rear-engine car? The driver can be moved forward for better visibility. Added weight in back gives better traction. Noise and engine heat are eliminated from the passenger compartment. Fewer engine parts are necessary; one of the first to go would be the long drive shaft and its bulge in the car floor.

That Pontiac and a number of other GM “bustle buggies,” told the engineers the pros and cons of the problem.

But the styling section of GM still wasn’t convinced. What about those super-streamlined beauties the artists, have been playing up as the “cars of the future”? You’ve seen plenty of them. Three persons in front, looking through the swept-back windshield. There is no hood on this creationâ€”remember, the engine’s way back out of the way. In the rear seat are three passengers with engaging grins on their faces, happily contemplating life.

There wasn’t enough evidence against the rear-engine to warrant its complete dismissal.

If the body could be styled to fit, and if enough advantages could be found in it to outweigh the objections to its engine location, GM would have itself a new car.

To answer these questions, they built a rear-engine car which they called the Corsair. It’s a three-eighths life-size, natty little model, just like one of those futuristic dream-wagons the artists have conjured up. But here’s what they had to do with it. Do you like it?

To make room for the front wheels to turn and to give the driver all the extra visibility the design is supposed to afford, they had to put him all by himself up front. With the wheels fully turned, only 34 inches remained between them for the driver’s legs. To accommodate the passengers, two more seats were necessary. The overall effect was that of a bits.

This, in the GM minds, was enough of a reason to pigeon-hole the idea. At least for the time being.

The Corsair is undoubtedly GM’s “car of the future.” Will it ever be produced? It has been tested. Its advantages and disadvantages are known. If you, the motoring public, demand this style car, GM won’t have any alternative but to take it from its moth balls, wipe it off, and hand it over.