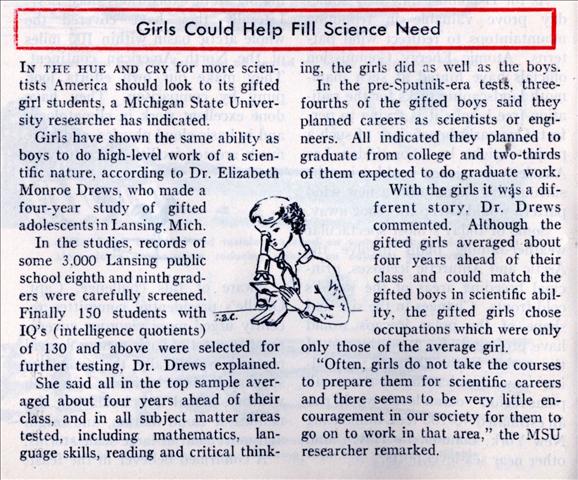 In the hue and cry for more scientists America should look to its gifted girl students, a Michigan State University researcher has indicated.

Girls have shown the same ability as boys to do high-level work of a scientific nature, according to Dr. Elizabeth Monroe Drews, who made a four-year study of gifted adolescents in Lansing. Mich.

In the studies, records of some 3.000 Lansing public school eighth and ninth graders were carefully screened. Finally 150 students with -IQ’s (intelligence quotients) of 130 and above were selected for further testing, Dr. Drews explained.

She said all in the top sample averaged about four years ahead of their class, and in all subject matter areas tested, including mathematics, language skills, reading and critical think- ing, the girls did as well as the boys.

In the pre-Sputnik-era tests, three-fourths of the gifted boys said they planned careers as scientists or engineers. All indicated they planned to graduate from college and two-thirds of them expected to do graduate work.

With the girls it was a different story, Dr. Drews commented. Although the gifted girls averaged about four years ahead of their class and could match the gifted boys in scientific ability, the gifted girls chose occupations which were only only those of the average girl.

“Often, girls do not take the courses to prepare them for scientific careers and there seems to be very little encouragement in our society for them to go on to work in that area,” the MSU researcher remarked.