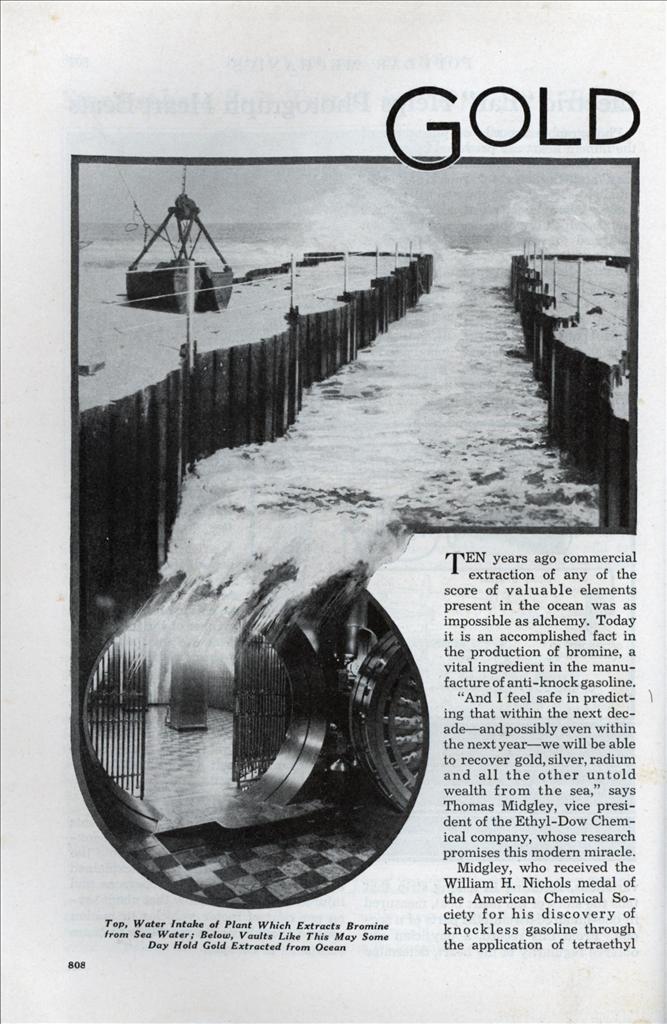 Gold from the Sea?

TEN years ago commercial extraction of any of the score of valuable elements present in the ocean was as impossible as alchemy. Today it is an accomplished fact in the production of bromine, a vital ingredient in the manufacture of anti-knock gasoline.

“And I feel safe in predicting that within the next decade—and possibly even within the next year—we will be able to recover gold, silver, radium and all the other untold wealth from the sea,” says Thomas Midgley, vice president of the Ethyl-Dow Chemical company, whose research promises this modern miracle.

Midgley, who received the William H. Nichols medal of the American Chemical Society for his discovery of knockless gasoline through the application of tetraethyl lead, then continued: “Now that we have made one dream a reality, it is only a matter of further technical development and refinement of processes before we make the sea loosen its hold on a fortune so fabulous that it staggers the imagination.

‘The process for taking gold from sea water is no more difficult a problem today than was the task of ex- tracting bromine ten years ago. Tomorrow we shall probably be wondering how we overlooked some simple discovery that will unlock the door.

“In fact, the sea is the greatest storehouse of wealth on the earth. Once the secret of tapping it is known, it will give man an inexhaustible treasure house of riches he will be able to draw on for thousands of years without striking bottom.”

Bromine is used in synthetic chemistry, medicine and the color industry, but its chief value at present is in the manufacture of what motorists know as “ethyl.’* It is a dark reddish-brown non-metallic liquid never found free in nature but occurring in spring waters, salt deposits and certain silver ores in addition to sea water. Heretofore it has been commercially prepared from bittern, the residue left after salt has crystallized. The Ethyl-Dow company has been working for years on the problem of producing bromine directly from sea water, its most logical source.

“As everyone knows, sea water is slightly alkaline,” Midgley explains. “To make it give up its bromine, it is only necessary to shift it to the acid side. In our plant we accomplish this by adding a small amount of sulphuric acid.”

The Ethyl-Dow plant for the production of bromine, near Wilmington, N. C, is a series of sealed chambers in which occurs an amazing metamorphosis through chemical prestidigitation. Located almost at the ocean’s edge, the plant draws its “raw material” through a large canal into which the sea water gushes and booms like the surf. In the first chamber the water receives its injection of sulphuric acid to make the subsequent transformation possible. Then, in another room, chlorine is added. Chlorine and bromine, which is in the water in the form of sodium bromide, are related. The chlorine, however, is the more active and soon joins with the sodium, “kicking the bromine out.”

As soon as the bromine starts to emerge in a combination of gas and solids looking something like smoke, the water is pumped to the top of the bromine towers and poured down in a fan-shaped shower. A current of air is forced through this shower, not strong enough to carry away the spray but sufficiently strong to blow the bromine fumes into another chamber. Here a shower of soda-ash solution is sprayed from the roof. The soda ash has an affinity for the bromine, precipitating bromide-bromate, which is commonly known as mining salt. This is pumped into the ethylene di-bromide building, where it is made into ethyl fluid.

One factor making the extraction of gold at the Ethyl-Dow plant a probability of the near future is the theory that in extracting the bromine, the gold content in the sea water becomes ionized, or electrically conductive. Since gold in its native state in the water exists in the form of a colloidal suspension, it is much more difficult to remove than bromine, but if it becomes ionized, it could be filtered by making it adhere to some cheap chemical substance.

One of the chief obstacles to the profitable extraction of gold from sea water has been the prohibitive cost of pumping. With the water already running through the plant for the elimination of bromine, gold could be made a by-product. The water pumped up in the course of one day in the bromine process contains more than $1,000 in gold. It also contains, in varying quantities, radium, silver and many other valuable elements.