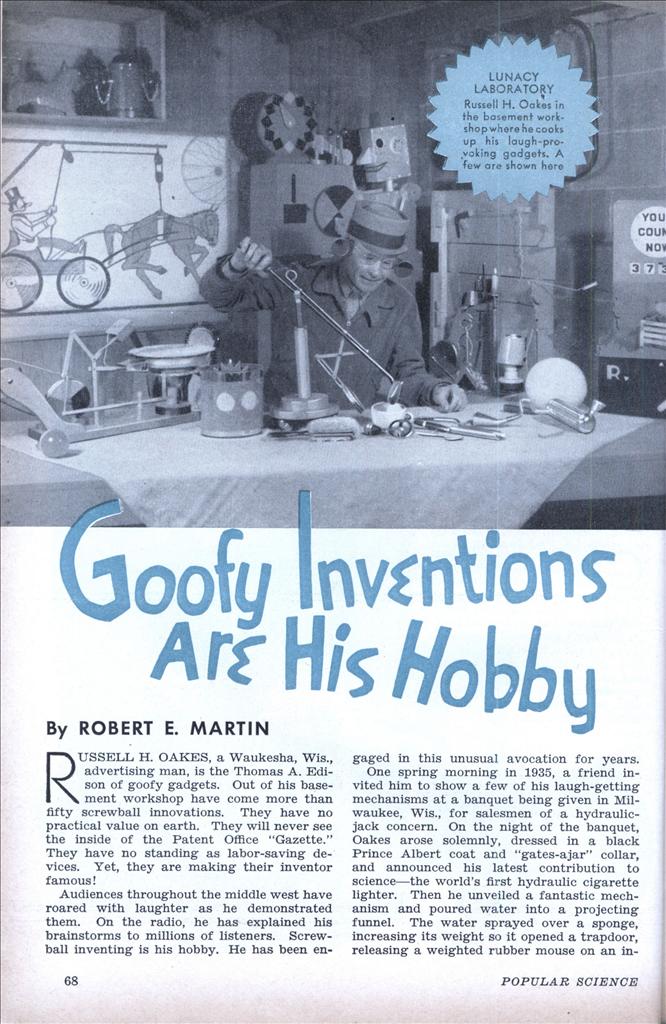 Goofy Inventions Are His Hobby

RUSSELL H. OAKES, a Waukesha, Wis., advertising man, is the Thomas A. Edison of goofy gadgets. Out of his basement workshop have come more than fifty screwball innovations. They have no practical value on earth. They will never see the inside of the Patent Office “Gazette.” They have no standing as labor-saving devices. Yet, they are making their inventor famous!

Audiences throughout the middle west have roared with laughter as he demonstrated them. On the radio, he has explained his brainstorms to millions of listeners. Screwball inventing is his hobby. He has been en- gaged in this unusual avocation for years. One spring morning in 1935, a friend invited him to show a few of his laugh-getting mechanisms at a banquet being given in Milwaukee, Wis., for salesmen of a hydraulic-jack concern. On the night of the banquet, Oakes arose solemnly, dressed in a black Prince Albert coat and “gates-ajar” collar, and announced his latest contribution to scienceâ€”the world’s first hydraulic cigarette lighter. Then he unveiled a fantastic mechanism and poured water into a projecting funnel. The water sprayed over a sponge, increasing its weight so it opened a trapdoor, releasing a weighted rubber mouse on an inclined plane. The mouse landed on a platform and so raised an arm bearing a needle that pricked a balloon. The collapse of the gas bag permitted a weight to fall, thus revolving an emery wheel against the “firing element”â€”a common match.

Since demonstrating this hilarious “hydraulic lighter,” Oakes has been in wide demand as an entertainer. He is introduced to his audiences as “Prof. Ratzin de Garrett.” During the course of his programs, he demonstrates inventions that run all the way from a noiseless soup spoon to a church collection plate which flashes on a red light when only a nickel is dropped in it. His “dripless doughnut dunker” invariably brings howls of laughter from the crowd.

This device, he explains, was invented for the diner who likes to dunk but is afraid he will scald his thumb and forefinger or will drip coffee across a clean tablecloth. It consists of a mobile unit resting on three casters above which is mounted a long arm holding a doughnut. The arm swings the doughnut over the coffee, dunks it, lifts it, andâ€”while a small drain pan swings into position beneath itâ€”raises it to the mouth of the diner. As the professor explains it, you “dunker, raiser, and drainer” in a single operation.

A large share of Oakes’ inventions have resulted from the experiences of his friends. Recently, a business acquaintance complained that he had lost three golf balls over the week-end. “What you need,” Oakes told him, “is a self-finding ball.” He proceeded to invent one. It is a five-inch rubber ball with a mechanism inside which, under a slight pressure, raises a collapsible red flag and blows a horn. Instead of indentations, the ball is equipped with knobs. They, the professor explains, are feelers which signal the inner mechanism when the ball rolls into the rough. A good share of his innovations are related to what the professor calls “one of the great international sports”â€”eating. There is a spaghetti fork which combines the features of a fork and an eggbeater. There is a knife equipped with a streamline scoop to prevent peas from rolling off the blade. There is a fly shooer which waves back and forth over a picnic sandwich. And, finally, there is a straw hat for use in eating grapefruit. It is equipped with a curtain attached by a roller to the brim. This curtain can be pulled down, protecting the face from squirting juice while providing windows for the eyes and an opening for the mouth.

The end of day finds Oakes ready to help insomnia victims with one of the goofiest of his burlesque inventions, a sheep counter. This slumber wooer consists of a mechanical sheep jumping over a fence while a meter automatically records the number of jumps. Instead of counting the sheep, all the user has to do is to occasionally glance at the meter! Another aid to sleepers harnesses snore power to turn out the bedside light.