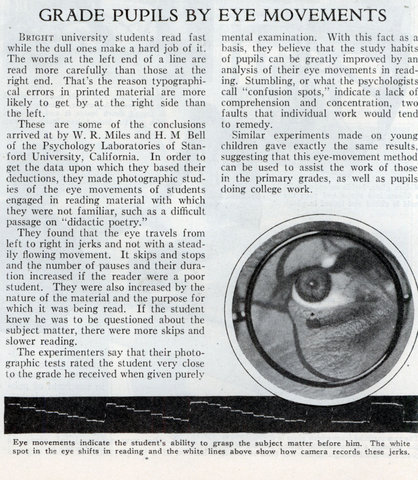 GRADE PUPILS BY EYE MOVEMENTS
Bright university students read fast while the dull ones make a hard job of it. The words at the left end of a line are read more carefully than those at the right end. That’s the reason typographical errors in printed material are more likely to get by at the right side than the left.

These are some of the conclusions arrived at by W. R. Miles and H. M Bell of the Psychology Laboratories of Stanford University, California. In order to get the data upon which they based their deductions, they made photographic studies of the eye movements of students engaged in reading material with which they were not familiar, such as a difficult passage on “didactic poetry.”

They found that the eye travels from left to right in jerks and not with a steadily flowing movement. It skips and stops and the number of pauses and their duration increased if the reader were a poor student. They were also increased by the nature of the material and the purpose for which it was being read. If the student knew he was to be questioned about the subject matter, there were more skips and slower reading.

The experimenters say that their photographic tests rated the student very close to the grade he received when given purely mental examination. With this fact as a basis, they believe that the study habits of pupils can be greatly improved by an analysis of their eye movements in reading. Stumbling, or what the psychologists call “confusion spots,” indicate a lack of comprehension and concentration, two faults that individual work would tend to remedy.

Similar experiments made on young children gave exactly the same results, suggesting that this eye-movement method can be used to assist the work of those in the primary grades, as well as pupils doing college work.