Be sure to check out the picture of the little girl dressed head to toe in rabbit skins on page 4. She looks like a character out of the Flintstones. 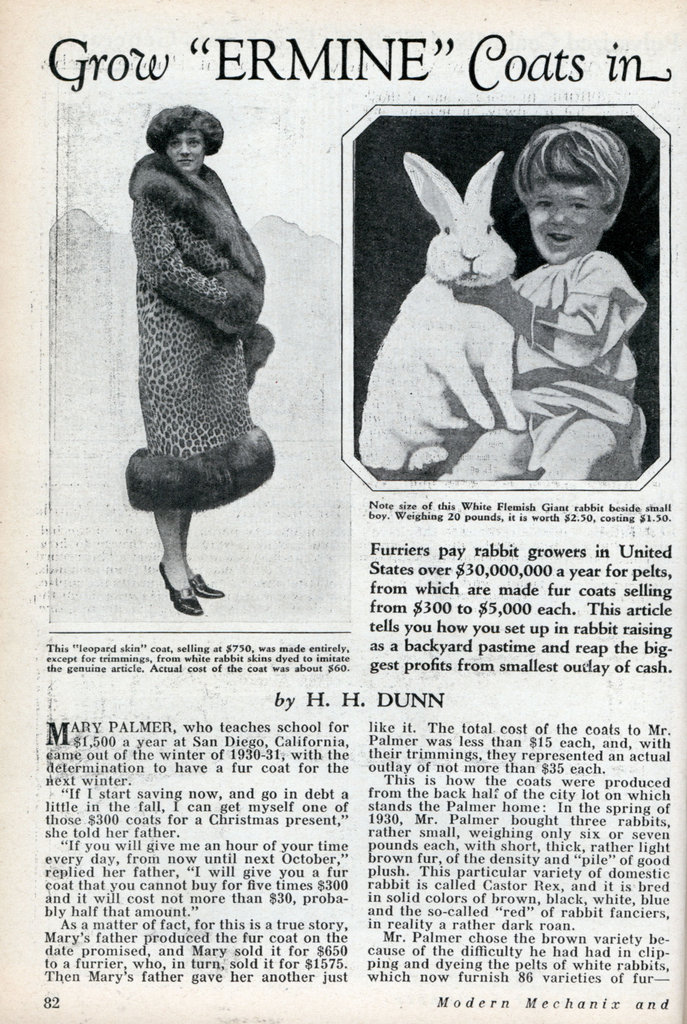 Furriers pay rabbit growers in United States over $30,000,000 a year for pelts, from which are made fur coats selling from $300 to $5,000 each. This article tells you how you set up in rabbit raising as a backyard pastime and reap the biggest profits from smallest outlay of cash.

MARY PALMER, who teaches school for $1,500 a year at San Diego, California, came out of the winter of 1930-31, with the determination to have a fur coat for the next winter.

“If I start saving now, and go in debt a little in the fall, I can get myself one of those $300 coats for a Christmas present,” she told her father.

“If you will give me an hour of your time every day, from now until next October,” replied her father, “I will give you a fur coat that you cannot buy for five times $300 and it will cost not more than $30, probably half that amount.”

As a matter of fact, for this is a true story, Mary’s father produced the fur coat on the date promised, and Mary sold it for $650 to a furrier, who, in turn, sold it for $1575. Then Mary’s father gave her another just like it. The total cost of the coats to Mr. Palmer was less than $15 each, and, with their trimmings, they represented an actual outlay of not more than $35 each.

This is how the coats were produced from the back half of the city lot on which stands the Palmer home: In the spring of 1930, Mr. Palmer bought three rabbits, rather small, weighing only six or seven pounds each, with short, thick, rather light brown fur, of the density and “pile” of good plush. This particular variety of domestic rabbit is called Castor Rex, and it is bred in solid colors of brown, black, white, blue and the so-called “red” of rabbit fanciers, in reality a rather dark roan.

Mr. Palmer chose the brown variety because of the difficulty he had had in clipping and dyeing the pelts of white rabbits, which now furnish 86 varieties of fur â€” from “ermine” to “seal” â€”to the trade of this country.

This Castor Rex is adapted to all climates of the Temperate Zone, and endures the snowy winter of Wisconsin as well as it does the rainy season of southern California. The three animals cost Mr. Palmer $20 â€”since he bought them for their healthy condition and their fur, not for their paper pedigrees.

He built for them a three-tier hutch, such as is shown in the accompanying photograph, from free plans supplied by the College of Agriculture of the University of California, at a cost of $5.90. Two other hutches, which he built later, cost a little less.

Food for Rabbits Grown in Back Yard

On the back of the lot, an open space about 50×50 feet, Mr. Palmer planted alfalfa, chard, carrots, and a small patch of lettuce, all “crops” being rotated, and the lettuce grown not for food, but to supply the vitamin found to be necessary to rabbit mothers in the production of large litters.

By the fall of 1931, he had 97 rabbits, including the original three. Of these, 81 weighed from one and one-half to two pounds, dressed, the ideal size for marketing. Carefully kept figures showed that these had cost him 9.7 cents a pound to produce, net meat weight.

This figure, however, is too high, as 7 to 9 cents is the range allowed by rabbit-farmers who raise these animals for market. However, Mr. Palmer received 15 cents a pound for the meat, dressed. For the pelts, he could have obtained 50 to 55 cents each, or 15 to 20 cents more than the current market price for the ordinary white-rabbit pelt, which has to be clipped and dyed.

Forty pelts were required to make each of Mary’s coats. Against these pelts, he charged off $17.70 for hutches, and $11.65 for feed, a total of $29.35, or, roughly, $14.70 for each coat. The $18 which he received for the dressed meat almost paid for the original breeding stock, which he still has, as he has the hutches.

Making of the coats, with their trimmings, cost, again roughly, $20 each, bringing their total cost to the “less than $35” Mr. Palmer had promised. The furrier sold the coat which he purchased from Mary under the name of “Siberian Sea-Otter.” Had it been genuine sea-otter â€” an animal now almost extinct â€” the price would have been nearer $15,000 than the $1575 he asked and obtained.

The hour-a-day which Miss Palmer gave in return for her coats went into the garden and in feeding the rabbits the vegetation produced from it, as well as the dry rolled-oats which is the staple diet of the domestic rabbit. Mr. Palmer devoted an hour a day to the same work. This was all the labor given to the fur-producers.

Meanwhile, in Chula Vista, a suburb of San Diego, E. F. Slinkard, another rabbit-farmer, was producing animals of the White Flemish strain that weigh 20 pounds at fifteen months. They dress off to 14 or 15 pounds, when ready for the oven, cost 7 to 9 cents a pound to produce, and sell for 14 to 17 cents a pound.

Here, then, are the two ends of an industry in which more than $5,000,000 is invested in one California county alone, and which represents an investment of approximately $70,000,000 throughout the United States. In 1930, the latest available figures showed that the industry of making men’s felt hats alone took care of 100,000 rabbit skins daily.

Investigation by national and state government experts show that rabbits provide 86 different kinds of furs, from ermine to French sable. The only competitor the rabbit has as a fur-bearing animal today is the common muskrat of Louisiana, East Texas, Mississippi and other states.

It has been found that, taking a rough average throughout the United States, 300 rabbits may be raised annually on an area 50×60 feetâ€”the average vacant space on the rear of a city lot. Attempts to rear more than this number on such an area usually results in loss, sometimes in failure. The greatest proportionate successes have been attained by those who raise these animals primarily for their own and their families’ meat supply, disposing of surplus meat to neighborhood markets, and of carefully preserved furs to established buyers.

Prices paid to the grower for meat vary from 12.5 cents, to 20 cents a pound, usually from 14 to 17 cents. Pelts bring from 35 cents a pound for the commoner and smaller varieties, of which 2.5 to 3 pelts make a pound, to 50, 60 and even 75 cents each for the rarer and more finely furred animals.

The pelts of the great majority of varieties of rabbits are used as “furs”; that is, the skin is left intact as removed, and the fur or hair clipped to the desired thickness and then the entire pelt is dyed to any color wanted. This means that the rabbit must be killed to obtain the skin. The Angora rabbit, however, is clipped, and the long hair woven into felt or into such fur as required. These animals supply an average of three “crops” of hair every two years; though in some favorable climates, two a year may be cut. The Angora, however, is not so profitable as a meat rabbit, and is more difficult to rear.

The common combination rabbit, which furnishes “ermine” from its pelt, and 8 to 12 pounds of marketable meat, is the white Flemish giant, in which strain has been developed the new 20-pound animal. The New Zealand red is another large animal, primarily raised for meat, but supplying a fur which, while it has to be dyed, is heavy and suitable for the manufacture of such fur garments as American seal, Arctic seal, Baltic black and brown fox, castorette, chinchilla, and more than a score of others.

For such fur garments, consisting of 40 to 80 rabbit skins each, the retail price ranges from $300 to $5,000. In England alone, this business of growing rabbits at home has increased from a production of about 150,000 pelts in 1929 to an estimated output of 1,500,000 skins in 1932. British rabbit-breeders estimate that at least 85 per cent of these rabbits are raised on backyard areas covering not more than 200 square feetâ€”a strip, say 20 feet long by 10 feet wide.

Furriers pay rabbit-growers of the United States nearly $30,000,000 a year for pelts, and slightly less than $25,000,000 annually to foreign producers. Babbit-growers estimate that $5 a year net profit from each breeding doe, who will produce about 20 young animals annually, is a fair average, especially in the larger plants, where several hundred such does are maintained. Back-yard rabbit-growers sometimes reach $10 to $12 a year profit from a single female.

Original costs of these breeding does, about one year old, is $5 at the present time, though a year ago it was $7.50, with $10 as a top price, except for fancy stock, such as the Castor Bex, mentioned at the beginning of this story; the Himalaya, and some of the small blues and reds. It probably is best for the home raiser of rabbits to avoid these fancy breeds and devote his attention to the well-established Flemish and New Zealand strains, which are hardier, more adaptable in their feeding habits, and which give greater weight at an earlier marketing age.

The hutches and carrying cases which have been found most successful are pictured herewith in such manner that they need no description. It has been found that a maximum of two ounces of feed daily for each pound of weight of the animal gives the best results. This feed consists mainly of alfalfa, well dried, and coarse, dry, rolled oats, such as is fed to other livestock.

Carrots, green alfalfa, lettuce, green barley, chard and beet leaves, are fed in small amounts. In every instance, the most successful growers insist that the rabbits should be given time to clean up virtually all their feed from one meal, before they are given another. An abundance of water .is an essential, but it must be placed in dishes fixed at such a height in the hutch that the rabbit must stand up to drink. The back-yard rabbit grower should first of all obtain and study the voluminous literature published by the U. S. Department of Agriculture, Washington, D. C, and of a number of the states. Most of this may be obtained through the agricultural colleges of the universities of the various states. All of it is accurate, conservative, and the result of actual experiences over a long period of time in a highly-specialized industry. Furthermore, all of it is free to the interested individual.