Actually, this is 10% about the melon cops and 90% a plug for the “professional, scientific”, melon farming industry. 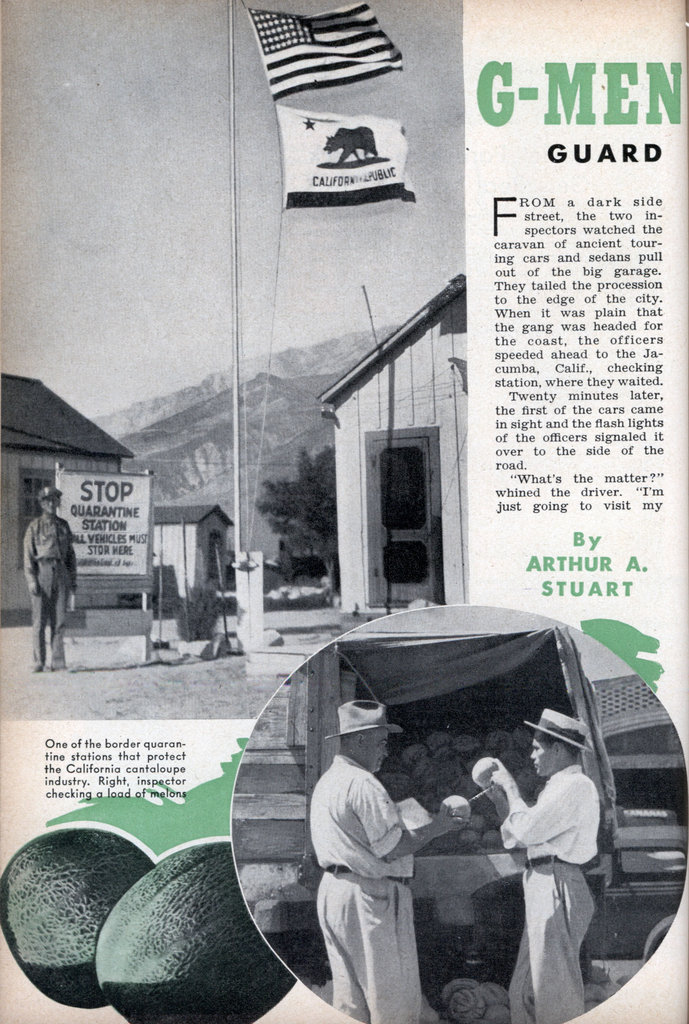 FROM a dark side street, the two inspectors watched the caravan of ancient touring cars and sedans pull out of the big garage. They tailed the procession to the edge of the city. When it was plain that the gang was headed for the coast, the officers speeded ahead to the Jacumba, Calif., checking station, where they waited. Twenty minutes later, the first of the cars came in sight and the flash lights of the officers signaled it over to the side of the road.

“What’s the matter?” whined the driver. “I’m just going to visit my brother. Look at my outfit.”

He jerked a thumb toward an army cot and a couple of suitcases piled across the canvas-covered rear compartment. But the inspector lifted the edge of the canvas and sniffed a ripe aroma.

“Bootlegging melons, eh? Well, mister, if your brother wants to see you, he’ll have to look you up in our county jail!”

Within ten minutes the inspectors had the whole caravan lined up along the roadside and every member of the Imperial Valley’s biggest ring of melon bootleggers was in custody. Their racket was to get truckloads of condemned melons from the packing sheds for “hog food,” reload them into passenger cars, and then run the inspection blockade which halts every truck leaving the valley. This time, a secret tip had put inspectors on their trail and led to their capture.

From early May to mid-September, the men who guard the nation’s melon crop are busy supervising the picking, grading, and packing of the 400,000,000 cantaloupes that American families will eat during the season. They run laboratory tests for sugar content, confiscate inferior melons, and crack down on bootleggers who seek to smuggle “hot” melons into retail channels. Their work makes possible an amazing multimillion-dollar “deal” in which whole trainloads of melons are purchased, sight unseen, by men who lay down spot cash for them clear across the continent, before ever a crate of cantaloupes begins to roll on its way!

From seed to the fully ripened, golden-meated melon on your table now is a rapid-fire agricultural process speeded up at a hundred points by mechanical and laboratory developments. In Imperial Valley, a rich, ancient sea bottom 200 feet below sea level, scientific farmers get double crops by beating the seasons and turn melons out by the million, as uniform as automobiles from the factory production line.

The 1940 streamline cantaloupe comes from “air-conditioned” fields planted in November by machines which rapidly spray seeds thickly along the south side of each long row. Behind follow men who stoop every three feet to push down a wire staple like a croquet wicket, then deftly fold a square of glassine paper until it makes a neat tepee. When the tiny plants push through the soil, thinners hoe out all but two plants to each hill, then replace the little tents, to shut out the chill northwest frosts, leaving the east end open to admit the morning sun. Water is measured out at intervals from irrigation ditches so that each row is kept moist just above the seed line. In March, the tents are removed. Six weeks later begins a feverish day-and-night drive that stops only when the last melon has rolled off the busy production line for shipment.

At daylight the pickers are in the fields, each carrying a strong canvas bag with a trapdoor at the bottom. As fast as the field boxes are filled, trucks rush them to the big, open packing sheds where graders inspect the melons as they pass along conveyor belts; discard damaged or substandard fruit; grade the others according to size, and send them on to a scrubbing machine, which sterilizes and waxes the melons against decay.

Now the conveyor belt carries them on to the packers, who work with almost incredible speed. One hand grabs a melon from the conveyor belt while the other snatches a square of colored tissue paper; one rapid twirl wraps the melon neatly and it goes into the crate. Farther down the line, a power press gently but surely compresses the boxful, forcing the contents tightly down. Automatic hammers instantly nail fast the bulging slats on the boxes. Meanwhile, freight cars wait on the siding where huge “precooling” fans are sending chill air currents through them. Overhead, conveyor belts bring up an endless stream of 300-pound ice cakes, which are mechanically shattered and the cracked ice shoveled down through the roof hatches into bunkers at each end. The crates of melons are stacked to shoulder height, with cleats between layers and plenty of room above for air to circulate. In some sheds, doors and hatches are closed and hoses attached to a machine that pumps in a gaseous mixture known as nitrogen trichloride, which kills fungi but does not harm the melons.

Within a few hours, the cars have chilled to the shipping temperature of forty-five degrees. The big circulating fans are removed, the ice bunkers refilled to the brim, the cars sealed and started on their way.

Through the night the trains roll endlessly out of Imperial Valley, sometimes pulling as many as 600 cars of melons daily. A single day’s work would fill a train of box cars seven and a half miles long.

Out of this valley, only sixty miles long by twenty wide, last year went 10,800 cars of cantaloupes and honeydew melonsâ€” enough to lay down a continuous line of melons, three deep, from coast to coast. When you next dip your spoon into the golden meat of a cantaloupe, it’s a fifty-fifty chance that it will be from these air-conditioned fields far below sea level at the bottom of the United States.