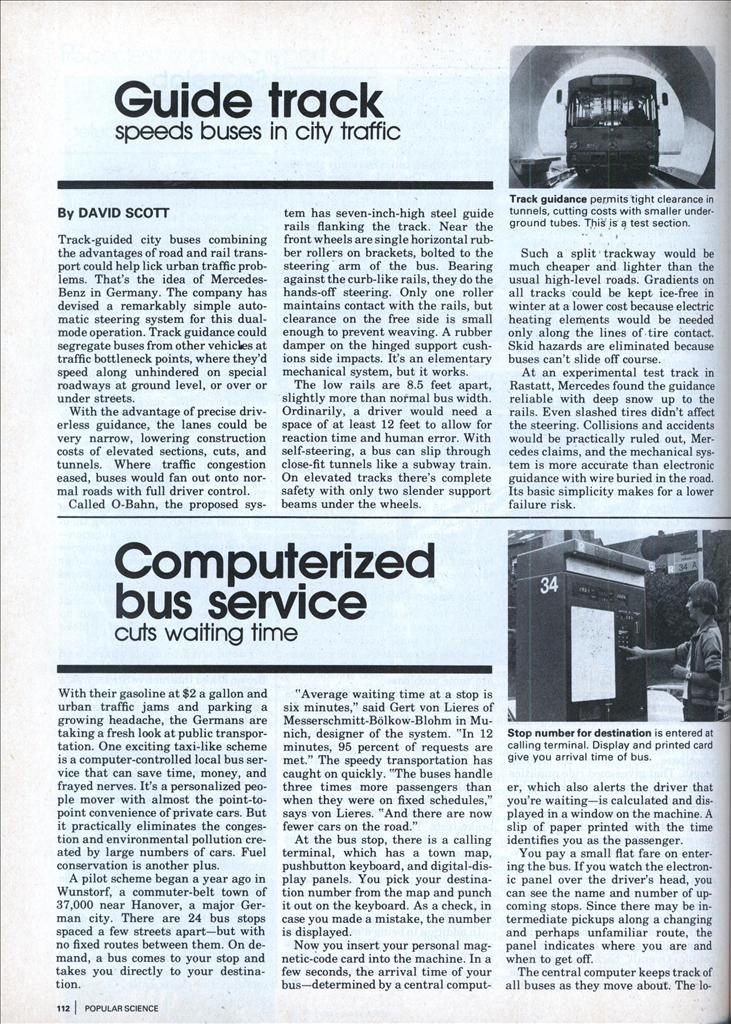 Track-guided city buses combining the advantages of road and rail transport could help lick urban traffic problems. That’s the idea of Mercedes-Benz in Germany. The company has devised a remarkably simple automatic steering system for this dual-mode operation. Track guidance could segregate buses from other vehicles at traffic bottleneck points, where they’d speed along unhindered on special roadways at ground level, or over or under streets.

With the advantage of precise driverless guidance, the lanes could be very narrow, lowering construction costs of elevated sections, cuts, and tunnels. Where traffic congestion eased, buses would fan out onto normal roads with full driver control.

Called O-Bahn, the proposed system has seven-inch-high steel guide rails flanking the track. Near the front wheels are single horizontal rubber rollers on brackets, bolted to the steering arm of the bus. Bearing against the curb-like rails, they do the hands-off steering. Only one roller maintains contact with the rails, but clearance on the free side is small enough to prevent weaving. A rubber damper on the hinged support cushions side impacts. It’s an elementary mechanical system, but it works.

The low rails are 8.5 feet apart, slightly more than normal bus width. Ordinarily, a driver would need a space of at least 12 feet to allow for reaction time and human error. With self-steering, a bus can slip through close-fit tunnels like a subway train. On elevated tracks there’s complete safety with only two slender support beams under the wheels.

Such a split trackway would be much cheaper and lighter than the usual high-level roads. Gradients on all tracks could be kept ice-free in winter at a lower cost because electric heating elements would be needed only along the lines of tire contact. Skid hazards are eliminated because buses can’t slide off course.

At an experimental test track in Rastatt, Mercedes found the guidance reliable with deep snow up to the rails. Even slashed tires didn’t affect the steering. Collisions and accidents would be practically ruled out, Mercedes claims, and the mechanical system is more accurate than electronic guidance with wire buried in the road. Its basic simplicity makes for a lower failure risk.

Mercedes sees O-Bahn as a solution to city transport hassles. German studies show that 90 percent of all passenger-travel distances are under 30 miles. As mass-transit vehicles, buses can be more versatile and pleasant to ride in than subways. Automatic guidance would give commuters a further inducement to leave their cars at home.

With their gasoline at $2 a gallon and urban traffic jams and parking a growing headache, the Germans are taking a fresh look at public transportation. One exciting taxi-like scheme is a computer-controlled local bus service that can save time, money, and frayed nerves. It’s a personalized people mover with almost the point-to-point convenience of private cars. But it practically eliminates the congestion and environmental pollution created by large numbers of cars. Fuel conservation is another plus.

A pilot scheme began a year ago in Wunstorf, a commuter-belt town of 37,000 near Hanover, a major German city. There are 24 bus stops spaced a few streets apart—but with no fixed routes between them. On demand, a bus comes to your stop and takes you directly to your destination.

“Average waiting time at a stop is six minutes,” said Gert von Lieres of Messerschmitt-Bolkow-Blohm in Munich, designer of the system. “In 12 minutes, 95 percent of requests are met.” The speedy transportation has caught on quickly. “The buses handle three times more passengers than when they were on fixed schedules,” says von Lieres. “And there are now fewer cars on the road.”

At the bus stop, there is a calling terminal, which has a town map, pushbutton keyboard, and digital-display panels. You pick your destination number from the map and punch it out on the keyboard. As a check, in case you made a mistake, the number is displayed.

Now you insert your personal magnetic-code card into the machine. In a few seconds, the arrival time of your bus—determined by a central computer, which also alerts the driver that you’re waiting—is calculated and displayed in a window on the machine. A slip of paper printed with the time identifies you as the passenger.

You pay a small flat fare on entering the bus. If you watch the electronic panel over the driver’s head, you can see the name and number of upcoming stops. Since there may be intermediate pickups along a changing and perhaps unfamiliar route, the panel indicates where you are and when to get off.

The central computer keeps track of all buses as they move about. The lo cation of each is signaled over a two-way radio by the driver at each stop. A button on the dashboard terminal registers the name and number of a stop, and the computer then designates the next stop for that bus, flashing it onto the dashboard terminal as a new display. The computer optimizes pickups in accordance with requests and shortest travel distances.

So far, only five minibuses are in use. But already they’re carrying some 1200 people every weekday. With a full fleet of 30, waiting times should be cut, and buses can be used according to demand. —D.S.