This seems like a really, really bad idea for a party game. What questions would you ask to guarantee an interesting evening?
Also, I love how it can also be used as a kissing meter and that the girl who gets kissed is referred to as “the victim”. 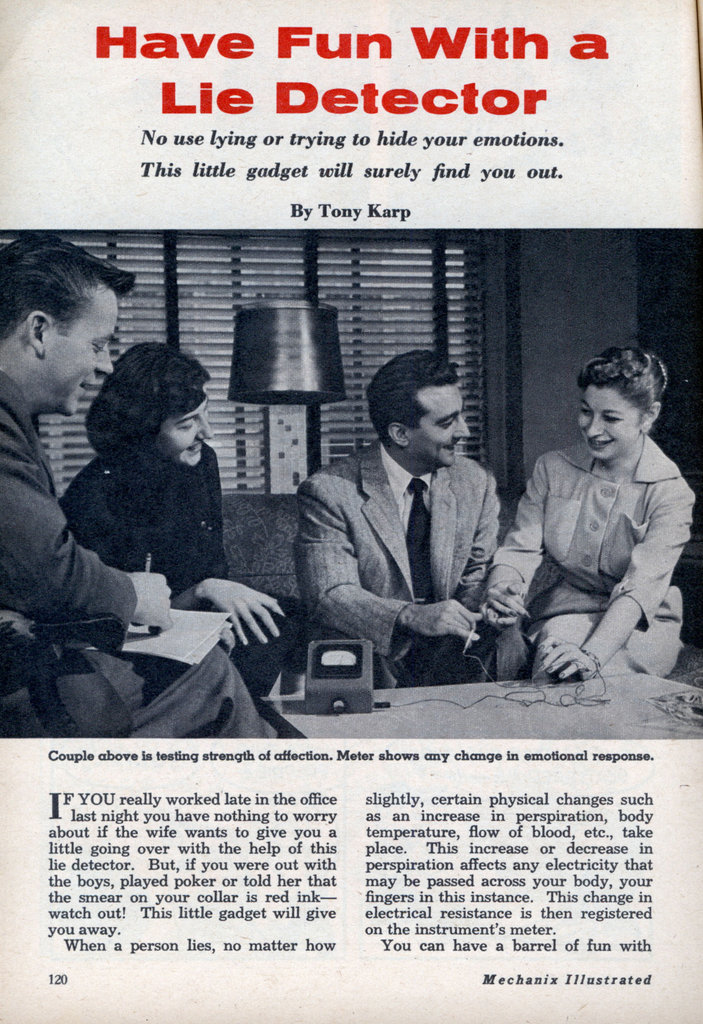 Have Fun With a Lie Detector

No use lying or trying to hide your emotions. This little gadget will surely find you out.

IF YOU really worked late in the office last night you have nothing to worry about if the wife wants to give you a little going over with the help of this he detector. But, if you were out with the boys, played poker or told her that the smear on your collar is red inkâ€” watch out! This little gadget will give you away.

When a person lies, no matter how slightly, certain physical changes such as an increase in perspiration, body temperature, flow of blood, etc., take place. This increase or decrease in perspiration affects any electricity that may be passed across your body, your fingers in this instance. This change in electrical resistance is then registered on the instrument’s meter.

You can have a barrel of fun with this device by using it as a kissing meter. To use for this osculatory purpose, fasten a clip to the index finger of the man and the other clip to the corresponding finger of the female victim. When their lips touch, the needle will swing to a certain point on the dial. When tried with another partner or with other couples, the needle will invariably swing to another location, as obviously no two people have the same electrical intensity when kissing! It’s all in fun so please don’t accuse your partner of being a cold fish if the needle doesn’t swing as far as you expected it to.

Our unit’s circuit is similar to the Wheatstone bridge used in laboratory instruments for precise resistance measurements. However, for the home builder, there are several drawbacks to the Wheatstone system. The meter must be very sensitive and, therefore, expensive. A battery voltage of at least 45 volts is required. With such a powerful battery there is a chance of burning out the meter if a short circuit occurs. In our system, with the addition of a transistor and another battery, the circuit is actually improved.

The transistor acts as an amplifier between the bridge and the meter. The 2N138 transistor amplifies the feeble current changes 140 times, making an expensive meter unnecessary. Low voltage batteries can be used. The current drain from the second battery is about .5 thousandths of an ampere. The second battery’s current drain is about half that. The unit requires only one control and both switches are on this control.

All parts for our detector may be purchased from Lafayette Radio, 100 Sixth Ave., New York 13, N. Y., or from your local radio store. The case, ICA 3996, is made of very light steel and the. builder using even a hand drill should encounter no trouble in drilling the various holes. [Continued on page 158]

Cut the circuit board to size and drill or ream the two holes to mount it on the meter. Flea clips are used to hold the transistor, but a socket (Lafayette No. MS-275) can be substituted. Attach the two battery holders and the resistors to the board. If desired, you may tie the batteries to the board and solder the wires directly to the terminals on the batteries. Follow the schematic carefully when wiring the unit. Make the leads from the board long enough to reach to the jack and the control. Once the meter is in the case, the other parts can be mounted in their proper places using the photo as a guide. Attach the switch to the control and wire it into the circuit. Wire up the rest of the circuit following the schematic carefully. Insert the batteries into the holders and the transistor into its flea clips. Check carefully to see that the polarity of the transistor and the batteries are correct; a reversed polarity can damage either the transistor or the meter.

To adapt the clips for our purpose, take the two Mueller No. 88 clips and remove the setscrews; twist the clip until it springs open. Now, replace the screws and wire the two clips to the plug with flexible wire.

Insert the jack into the plug but do not turn the unit on. Check once again for correct polarity of the batteries and the transistor and make sure that the control is wired correctly as shown in the photos. Turn on the unit, holding the two clips together. The meter should stay at zero. If it does not, check the circuit against the schematic. Now, connect the clips to one finger on each hand. Turn the control until the needle on the meter rests at about mid-scale. The needle should drift as your body resistance changes slightly. If the unit passes all these tests, you are ready to try it out on a subject.

Connect the clips as before and balance the meter to mid-scale. Do not turn the unit on unless there is some form of resistance between the two clips.

To use the meter properly, the subject must be asked a series of questions. It might sound something like this: “What is your name? Where do you live? Do you drink? Smoke? What did you do Saturday night?” etc., etc. Somewhere in this string of questions the subject should be asked something to which he is particularly sensitive. It may take a short time for the meter to give an indication but you will soon learn just what can be expected of the unit.

This detector makes an excellent demonstration unit for a psychology or law school class. But whether it is used for serious applications or just for some fun at your next party, it is a rewarding project for both builder and user.