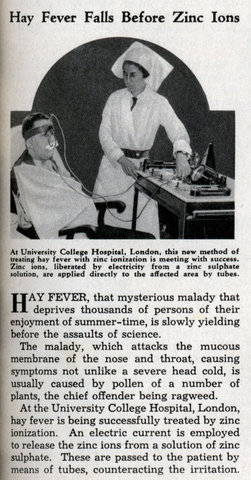 HAY FEVER, that mysterious malady that deprives thousands of persons of their enjoyment of summer-time, is slowly yielding before the assaults of science.

The malady, which attacks the mucous membrane of the nose and throat, causing symptoms not unlike a severe head cold, is usually caused by pollen of a number of plants, the chief offender being ragweed.

At the University College Hospital, London, hay fever is being successfully treated by zinc ionization. An electric current is employed to release the zinc ions from a solution of zinc sulphate. These are passed to the patient by means of tubes, counteracting the irritation.