Technology Review
Issue: Nov, 1946
Posted in: Advertisements, War
12 Comments on He advanced the bombing of Hiroshima by at least a year! (Nov, 1946)

He advanced the bombing of Hiroshima by at least a year! (Nov, 1946)

If the bombing had been pushed back a year, do you think the war would have lasted? If not, then you could make the case that Japan got nuked because this guy was trying to build a uranium light bulb.

Also, I find the exclamation point at the end of this sentence strangely disturbing:

(Little did they realize that their know-how would one day give America a head start in the race towards history’s grimmest goal!) 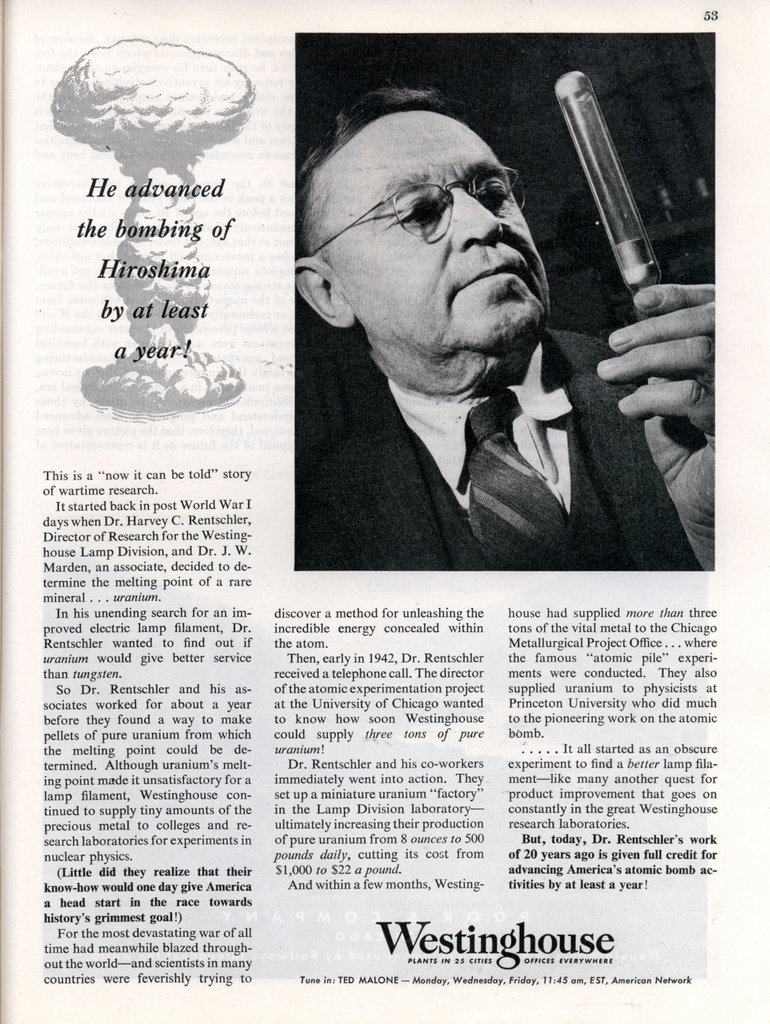 He advanced the bombing of Hiroshima by at least a year!

This is a “now it can be told” story of wartime research.

It started back in post World War I days when Dr. Harvey C. Rentschler, Director of Research for the Westinghouse Lamp Division, and Dr. J. W. Marden, an associate, decided to determine the melting point of a rare mineral . . . uranium.

In his unending search for an improved electric lamp filament, Dr. Rentschler wanted to find out if uranium would give better service than tungsten.

So Dr. Rentschler and his associates worked for about a year before they found a way to make pellets of pure uranium from which the melting point could be determined. Although uranium’s melting point made it unsatisfactory for a lamp filament, Westinghouse continued to supply tiny amounts of the precious metal to colleges and research laboratories for experiments in nuclear physics.

(Little did they realize that their know-how would one day give America a head start in the race towards history’s grimmest goal!) For the most devastating war of all time had meanwhile blazed throughout the world—and scientists in many countries were feverishly trying to discover a method for unleashing the incredible energy concealed within the atom.

Then, early in 1942, Dr. Rentschler received a telephone call. The director of the atomic experimentation project at the University of Chicago wanted to know how soon Westinghouse could supply three tons of pure uranium!

Dr. Rentschler and his co-workers immediately went into action. They set up a miniature uranium “factory” in the Lamp Division laboratory— ultimately increasing their production of pure uranium from 8 ounces to 500 pounds daily, cutting its cost from $ 1,000 to $22 a pound.

And within a few months, Westing- house had supplied more than three tons of the vital metal to the Chicago Metallurgical Project Office… where the famous “atomic pile” experiments were conducted. They also supplied uranium to physicists at Princeton University who did much to the pioneering work on the atomic bomb.

….. It all started as an obscure experiment to find a better lamp filament—like many another quest for product improvement that goes on constantly in the great Westinghouse research laboratories.

But, today, Dr. Rentschler’s work of 20 years ago is given full credit for advancing America’s atomic bomb activities by at least a year!