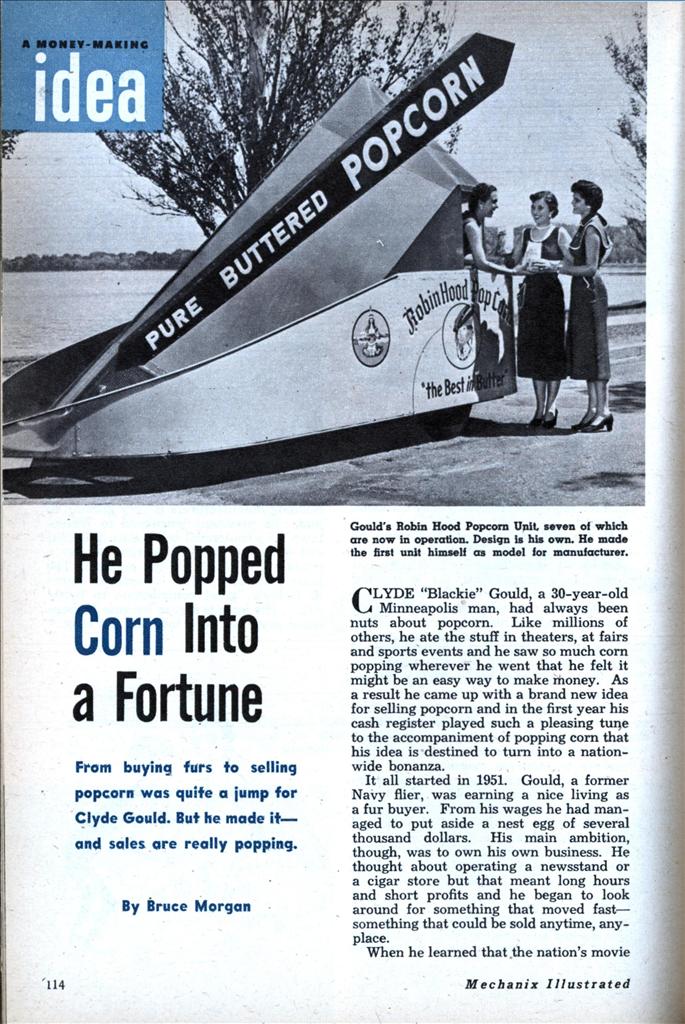 He Popped Corn Into a Fortune

From buying furs to selling popcorn was quite a jump for Clyde Gould. But he made it— and sales are really popping.

CLYDE “Blackie” Gould, a 30-year-old Minneapolis man, had always been nuts about popcorn. Like millions of others, he ate the stuff in theaters, at fairs and sports events and he saw so much corn popping wherever he went that he felt it might be an easy way to make money. As a result he came up with a brand new idea for selling popcorn and in the first year his cash register played such a pleasing tune to the accompaniment of popping corn that his idea is destined to turn into a nationwide bonanza.

It all started in 1951. Gould, a former Navy flier, was earning a nice living as a fur buyer. From his wages he had managed to put aside a nest egg of several thousand dollars. His main ambition, though, was to own his own business. He thought about operating a newsstand or a cigar store but that meant long hours and short profits and he began to look around for something that moved fast— something that could be sold anytime, anyplace.

When he learned that the nation’s movie theaters virtually were kept in business as a result of their terrific popcorn sales, Gould exclaimed: “Boy, that’s for me!”

A care-free, fun-loving individual, Gould told friends about his desire to sell popcorn. That posed a problem. They thought that he was wacky to even consider such an idea. Others said that he must be off his rocker because he wasn’t the kind of character to tie himself up with popcorn. But he was serious. Despite the ribbing from his friends, he went ahead with his “crazy” plan.

Gould figured that if you could sell average, unbuttered popcorn for a dime (due to the high price of butter most vendors were not using it) you could sell top-grade, hull-less corn doused with delicious, pure creamery butter for 15 cents or 25 cents for a giant box.

His problem, however, was how to get the stuff to the public. He could set up a store or a stand for some big event but in a few days or hours the event was over and so were the crowds.

“Why not take my product directly to the public?” he reasoned. The big question remaining then was “how?” Finally he came up with the idea of taking the legendary figure of Robin Hood as his trademark. He named the product “Robin Hood Popcorn” and designed a small, maneuverable trailer dispensing unit in the shape of Robin Hood’s feathered cap. This could be shifted and set up easily wherever there were crowds—at fairs, community functions and other events—by towing it behind a jeep panel truck. He tried to get a unit built by several different manufacturers but finally had to build one himself. He did a good job, too.

Next, he made an agreement with Land-O-Lakes Creamery whose extensive operation and heavy advertising of Land-O-Lakes Creamery Butter is known throughout the country. Thus he removed any suspicion on the part of the customers that anything but pure creamery butter was being used in the product.

In the beginning Gould was beset by a number of problems, some of them rather humorous. Like the time he was testing popcorn brands. He found that, strangely enough, the corn he popped didn’t have the same taste as the stuff he purchased at other stands. Then one day he discovered the reason. He smoked cigars almost continually and in the confined area of the wagon the smoke was making the corn taste odd.

Then his butter posed an awkward situation. He had to buy it in large quantities to get it at a reasonable price and had no place to store it except in his home. This he did but the stumbling block was—he was allergic to butter!

Finally Gould made a test run with his unit at a neighboring town. When people got a look at the wagon they began to rib him but when he anchored his rig on location, he was swamped with customers. He had to break up the crowd. Kids bought popcorn for blocks while he was still moving. That convinced him.

Quickly he built a total of seven wagons. Two jeeps were used for towing the trailers and for keeping the units supplied with * butter, corn, change and collecting proceeds.

One time during the Aquatennial Parade, Gould was selling popcorn in his colorful little rig when he received a terrific dressing-down from an exasperated official who thought the popcorn wagon was one of the floats that had strayed off parade limits. Gould soon convinced the official that he didn’t belong in the parade when he handed him a free sample box of his product. “The guy licked his chops,” said Gould, “after eating the corn. He ‘ bought a handful of boxes to take home to his family.”

Gould’s popcorn stands are a far cry from the conventional popcorn wagon which through the years has become such a familiar part of the American scene. Where earlier vintage outfits were always painted white, these have an effective and dazzling green-and-yellow color scheme, making them easy to spot. The 15-foot red “feather,” set at a rakish angle, points skyward and beckons the customers. An important advantage is that these outfits set low on the ground, almost at street level, thus expediting service and making it easy for the small fry to step up and buy.

For business after dark, the Robin Hood setups feature bright, colorful lighting arrangements. Instead of the glaring gasoline lamps, modern fixtures with bright interior and indirect exterior lighting are used. This is made possible by a small, compact, economical electric generating plant driven by an air-cooled gasoline engine. It’s an Onan Generator which produces 750 watts of AC power at a cost of but a few cents an hour. Gould chose these for his trailers because of their compact size, efficient operation and low initial cost. Each is mounted at the base of the “cap,” which is at the front end.

Many people became interested in the Robin Hood wagons and Gould decided to franchise his successful brainchild. With each franchise he will furnish a complete working unit and set up a supply system. Wagons cost $1500 but can be easily financed. An operator can realize about $100 gross a day from a single unit in the right location. Units can be worked summer and winter. Gould says that he has been operating continually in Minneapolis and in certain locations December has been his biggest month. •