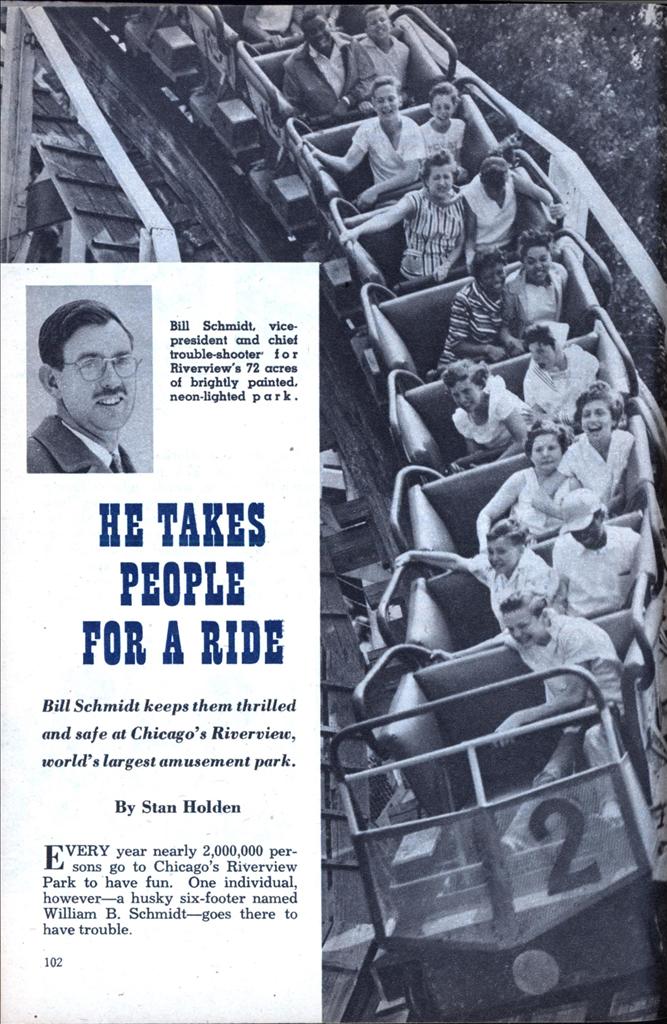 HE TAKES PEOPLE FOR A RIDE

EVERY year nearly 2,000,000 persons go to Chicago’s Riverview Park to have fun. One individual, however—a husky six-footer named William B. Schmidt—goes there to have trouble.

It’s part of his job. As vice-president and superintendent of Riverview, Schmidt is ringmaster and chief trouble-shooter of the world’s largest amuse- ment park. He runs 72 acres of neon-lighted, gaily-painted thrill-and-skill attractions valued at approximately $8,-000,000. That adds up to a huge cash investment for the sprawling playland.

However, although fun is his business, his business isn’t always fun. Take June 14, 1952, for example. That was the day of Schmidt’s biggest problem to date. It was a Saturday and it was hot —two factors which added up to 10,000 fun seekers jamming the huge playland. Coins and dollar bills flowed from tiny, clenched fists into the conveniently located cash boxes at Riverview’s 29 major rides, 17 refreshment stands, 55 concession games and the conglomeration of fun houses, shooting galleries, freak shows and miscellaneous amusement devices.

And then—suddenly—everything stopped. The loud speaker went dead. On the parachute ride, ten customers strapped to their narrow seats on the way up to the 220-foot tower, found themselves halted at precarious altitudes. At the same time hundreds of others became stranded on the winding, wiggly, wooden frameworks of roller coasters, in the swaying seats of ferris wheels, in boats on elevators part way up the water chutes and in a large revolving cylinder in which the occupants are glued to the wall by centrifugal force—the Rotor.

A fire in the generating plant had cut off electric power in the entire park, as well as in Chicago’s North Side. It all added up to a busy time for Schmidt and his staff as they scampered about releasing trapped patrons until power was restored four hours later.

Bill Schmidt has been working—and worrying—at Riverview for half of his 43 years. The son of the park’s president and general manager, he started as a roller coaster starter and has since operated every ride and test-your-skill device on the grounds. When his father went into semi-retirement recently, Bill took over the managerial chores. Nepotism aside, he was the best qualified man around.

When Schmidt took over, he studied the ride devices from a technical standpoint. “According to all of the laws of nature and all of the sound engineering principles,” he says, “some of those rides just couldn’t operate. But they did. As for safety features—there weren’t any.

“In the early days, if a roller coaster didn’t come back, the operator would say, ‘Hmmm. Must be out there somewhere.’ Then he’d send out another train. Pretty soon he’d hear a horrible crash and we’d have to go out and look for the wreckage.”

Once, when Schmidt was working on the coaster next to the golf course, a youngster of about 12 came up to him and said, “My buddy fell out.”

Schmidt immediately shut down the ride, called for the stretcher and went looking for the kid. He couldn’t be found. “What goes?” he asked the youngster.

“Well, I know he went on with me but he didn’t get off with me,” the boy said.

Three hours later, according to Schmidt, the other kid—the missing one—came back looking for his hat. He had tried to change seats while the coaster was moving, had lost his grip and sailed clear of the car. By some fluke he flew far enough to land in a sand trap on the golf course next door. He just got up, shook himself off and walked away!

This incident so unnerved Schmidt that he decided to make Riverview one of the safest amusement parks in the world. With his father’s help he succeeded. It took a lot of work and study, though. Old-time ride operators were flabbergasted when he started to analyze the rides with a slow-motion camera in order to eliminate neck-wrenching bounces and jerks.

A lot of other improvements followed. Air brakes were installed on the roller coaster and a signal block system similar to those on regular railroads (to keep the trains from colliding) was also set-up. The cars also had locking handle bars, strong rubber seats to absorb much of the roughness of the ride and nearly automatic controls. Most of the other rides were similarly modernized and a continuous inspect-and-repair program was begun.

The playland has won the high praises of city inspectors and the National Safety Council. The agent who insures the park swears on a stack of policies that “River-view is safer than the city’s streets.”

Safe or not, some of the rides appear murderous. This presents quite a problem—how to make the attractions scary enough to be interesting but not so scary that no one will ride them. Evidently the Schmidts have solved this dilemma for last year 1,900,000 people took 12,000,000 rides at the park.

When they aren’t busy eating and drinking, the fun spot’s patrons head for the rides.

One of the most intriguing is the Rotor, a European import. Rotor customers pay 25 cents whether they ride or watch the attraction which resembles a giant, empty gasoline storage tank.

Those who decide to ride enter the tank through a door in the side and arrange themselves along the circular wall. The door is then closed and the tank starts revolving, picking up speed until the riders are almost a blur. Then the lights go out and the floor of the tank drops away. When the lights go on again the riders are plastered by centrifugal force to the wall, usually in odd and undignified positions.

As fascinating as the Rotor is, the prize for the most popular ride goes to the roller coaster. The Chicago playland has six of them—more than any other fun spot in the country. The fastest and roughest one is called the Bobs.

The Bobs is a masterpiece of fiendish engineering. Within the short span of 153 seconds, riders are whizzed up and down 16 steep hills and zoomed around a dozen sharply banked curves. At one point it screams almost straight down—at 72 mph.

Nevertheless, almost three-quarters of a million fares were rung up on the Bobs in ’55, making it the most profitable ride in the park.

While the season is on, Schmidt works 10 hours a day, seven days a week, managing a staff of 1,000. But even when the park is closed he puts in almost as much time supervising the painting and repair work. Only in February or March, when Chicago weather is too severe for much outdoor maintenance work, can he have a little fun for himself.

“I usually go south to Florida and rent a boat,” he says. “Then I loaf all day and all night. If something goes wrong with the boat, all I do is telephone the fellow I rented it from. I tell him, ‘Come over and fix it, boy. I’m tired.’ ” •