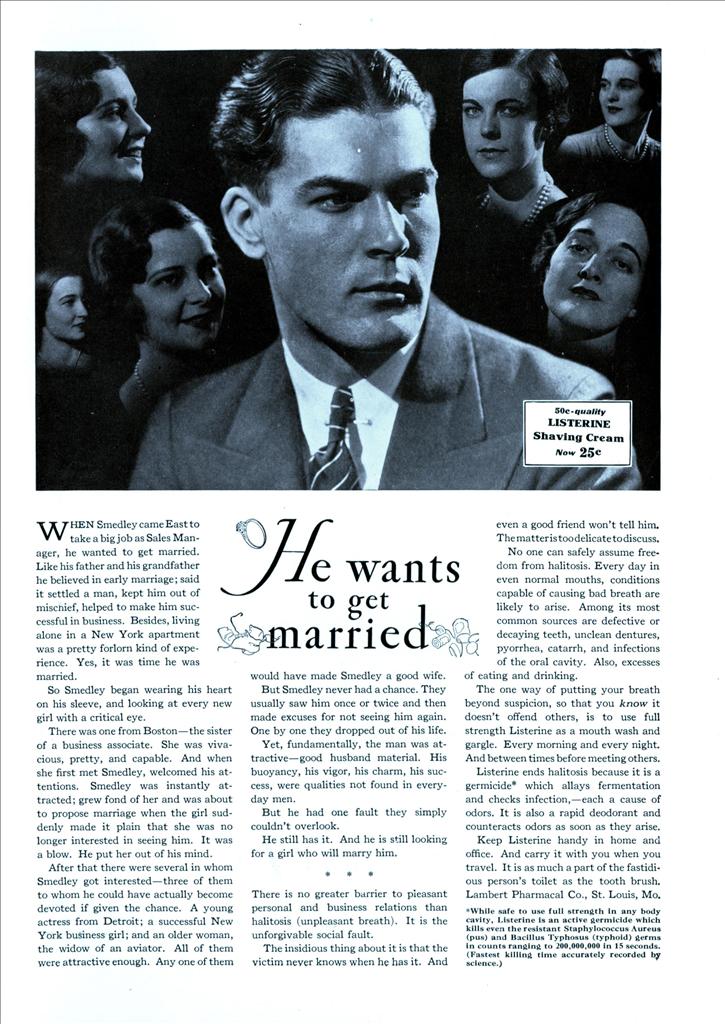 He wants to get married

WHEN Smedley came East to take a big job as Sales Manager, he wanted to get married. Like his father and his grandfather he believed in early marriage; said it settled a man, kept him out of mischief, helped to make him successful in business. Besides, living alone in a New York apartment was a pretty forlorn kind of experience. Yes, it was time he was married.

So Smedley began wearing his heart on his sleeve, and looking at every new girl with a critical eye.

There was one from Boston—the sister of a business associate. She was vivacious, pretty, and capable. And when she first met Smedley, welcomed his attentions. Smedley was instantly attracted ; grew fond of her and was about to propose marriage when the girl suddenly made it plain that she was no longer interested in seeing him. It was a blow. He put her out of his mind.

After that there were several in whom Smedley got interested—three of them to whom he could have actually become devoted if given the chance. A young actress from Detroit; a successful New York business girl; and an older woman, the widow of an aviator. All of them were attractive enough. Any one of them would have made Smedley a good wife.

But Smedley never had a chance. They usually saw him once or twice and then made excuses for not seeing him again. One by one they dropped out of his life.

Yet, fundamentally, the man was attractive—good husband material. His buoyancy, his vigor, his charm, his success, were qualities not found in everyday men.

But he had one fault they simply couldn’t overlook.

He still has it. And he is still looking for a girl who will marry him.

* * * There is no greater barrier to pleasant personal and business relations than halitosis (unpleasant breath). It is the unforgivable social fault.

The insidious thing about it is that the victim never knows when he has it. And even a good friend won’t tell him. The matter is too delicate to discuss. No one can safely assume freedom from halitosis. Every day in even normal mouths, conditions capable of causing bad breath are likely to arise. Among its most common sources are defective or decaying teeth, unclean dentures, pyorrhea, catarrh, and infections of the oral cavity. Also, excesses of eating and drinking.

The one way of putting your breath beyond suspicion, so that you know it doesn’t offend others, is to use full strength Listerine as a mouth wash and gargle. Every morning and every night. And between times before meeting others. Listerine ends halitosis because it is a germicide* which allays fermentation and checks infection,—each a cause of odors. It is also a rapid deodorant and counteracts odors as soon as they arise. Keep Listerine handy in home and office. And carry it with you when you travel. It is as much a part of the fastidious person’s toilet as the tooth brush. Lambert Pharmacal Co., St. Louis, Mo.

*While safe to use full strength in any body cavity, Listerine is an active germicide which kills even the resistant Staphylococcus Aureus (pus) and Bacillus Typhosus (typhoid) germs in counts ranging to 200,000,000 in 15 seconds. (Fastest killing time accurately recorded by science.)