Why doesn’t anyone use the term “topnotchers” anymore? 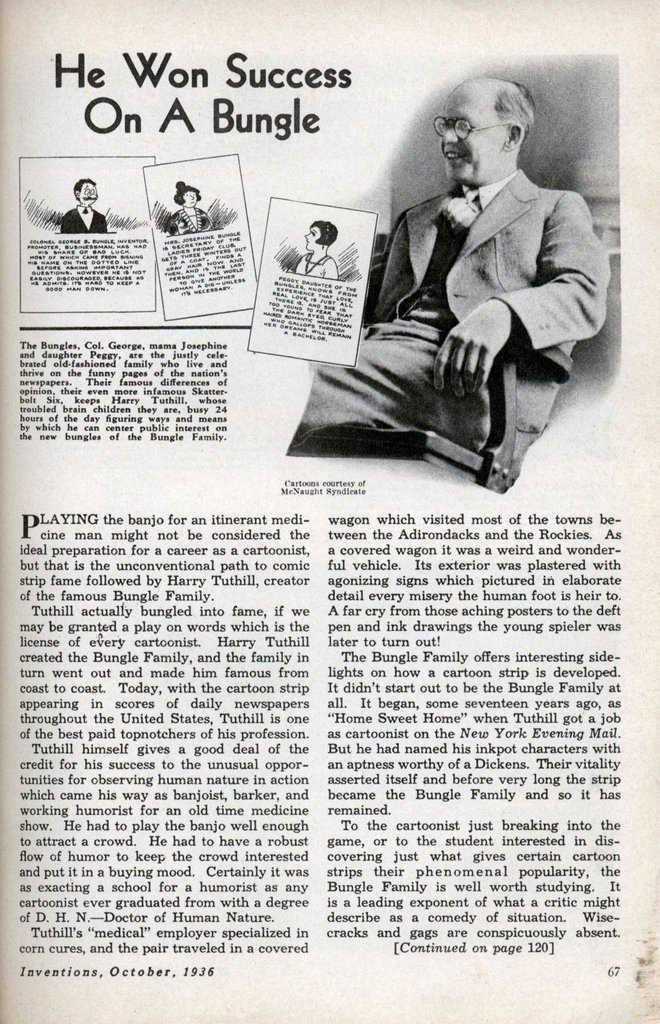 He Won Success On A Bungle

PLAYING the banjo for an itinerant medicine man might not be considered the ideal preparation for a career as a cartoonist, but that is the unconventional path to comic strip fame followed by Harry Tuthill, creator of the famous Bungle Family.

Tuthill actually bungled into fame, if we may be granted a play on words which is the license of every cartoonist. Harry Tuthill created the Bungle Family, and the family in turn went out and made him famous from coast to coast. Today, with the cartoon strip appearing in scores of daily newspapers throughout the United States, Tuthill is one of the best paid topnotchers of his profession.

Tuthill himself gives a good deal of the credit for his success to the unusual opportunities for observing human nature in action which came his way as banjoist, barker, and working humorist for an old time medicine show. He had to play the banjo well enough to attract a crowd. He had to have a robust flow of humor to keep the crowd interested and put it in a buying mood. Certainly it was as exacting a school for a humorist as any cartoonist ever graduated from with a degree of D. H. N.—Doctor of Human Nature.

Tuthill’s “medical” employer specialized in corn cures, and the pair traveled in a covered wagon which visited most of the towns between the Adirondacks and the Rockies. As a covered wagon it was a weird and wonderful vehicle. Its exterior was plastered with agonizing signs which pictured in elaborate detail every misery the human foot is heir to. A far cry from those aching posters to the deft pen and ink drawings the young spieler was later to turn out!

The Bungle Family offers interesting sidelights on how a cartoon strip is developed. It didn’t start out to be the Bungle Family at all. It began, some seventeen years ago, as “Home Sweet Home” when Tuthill got a job as cartoonist on the New York Evening Mail. But he had named his inkpot characters with an aptness worthy of a Dickens. Their vitality asserted itself and before very long the strip became the Bungle Family and so it has remained.

To the cartoonist just breaking into the game, or to the student interested in discovering just what, gives certain cartoon strips their phenomenal popularity, the Bungle Family is well worth studying. It is a leading exponent of what a critic might describe as a comedy of situation. Wisecracks and gags are conspicuously absent.

The situations are never fantastic. The troubles and successes of the Bungles are those which might reasonably occur to an average family.

Secondary characters are brought in as circumstances may require, but the spotlight always beats down upon the Bungles themselves— Colonel George B. Bungle, his wife Josephine, and his daughter Peggy. This is a secret known to every successful cartoonist—never let the center of interest shift from your heroes.

George B. Bungle, in many of his characteristics, reflects the secret yearnings of Tuthill himself. The Colonel, as thousands of Bungle fans are aware, is a troubled business man, a promoter, and something of an inventor. He comes by his inventive talents honestly, as a visitor to Tuthill’s studio soon discovers.

It is as much a home craftsman’s workshop as an artist’s studio. Half of it is given over to drawing boards, inkpots and pens which create the adventures of the Bungles from day to day. The other half is equipped with workbenches, wood lathes, turning tools, hacksaws and chisels in a profusion to delight the heart of a hobbyist.

Tuthill’s particular delight is tinkering with automobile engines. When the Bungle Family has trouble with its Scatterbolt Six, it is pretty safe to assume that Tuthill has just been taking one of his own cars apart and putting it together again. The hands which are so skilled with brush and pen are just as deft in operating upon a delicate piece of machinery. But all of Tuthill’s inventions issue through his brain child, George Bungle.

His workshop-studio occupies a building of its own at the rear of an old-fashioned house with many rooms, set back among the trees on his spacious estate in a suburb of St. Louis. Tuthill is one of the few first-rank cartoonists who lives in the middle west.