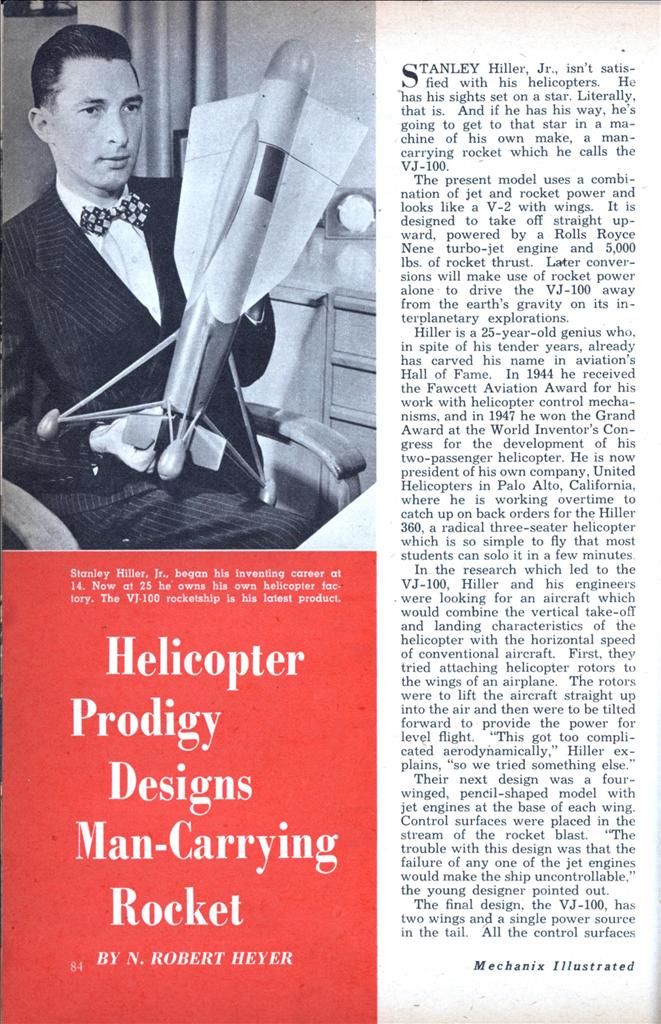 STANLEY Hiller, Jr., isn’t satisfied with his helicopters. He has his sights set on a star. Literally, that is. And if he has his way, he’s going to get to that star in a machine of his own make, a man-carrying rocket which he calls the VJ-100.

The present model uses a combination of jet and rocket power and looks like a V-2 with wings. It is designed to take off straight upward, powered by a Rolls Royce Nene turbo-jet engine and 5,000 lbs. of rocket thrust. Later conversions will make use of rocket power alone to drive the VJ-100 away from the earth’s gravity on its interplanetary explorations.

Hiller is a 25-year-old genius who. in spite of his tender years, already has carved his name in aviation’s Hall of Fame. In 1944 he received the Fawcett Aviation Award for his work with helicopter control mechanisms, and in 1947 he won the Grand Award at the World Inventor’s Congress for the development of his two-passenger helicopter. He is now president of his own company, United Helicopters in Palo Alto, California, where he is working overtime to catch up on back orders for the Hiller 360, a radical three-seater helicopter which is so simple to fly that most students can solo it in a few minutes In the research which led to the VJ-100, Hiller and his engineers were looking for an aircraft which would combine the vertical take-off and landing characteristics of the helicopter with the horizontal speed of conventional aircraft. First, they tried attaching helicopter rotors to the wings of an airplane. The rotors were to lift the aircraft straight up into the air and then were to be tilted forward to provide the power for level flight. “This got too complicated aerodynamically,” Hiller explains, “so we tried something else.”

Their next design was a four-winged, pencil-shaped model with jet engines at the base of each wing. Control surfaces were placed in the stream of the rocket blast. “The trouble with this design was that the failure of any one of the jet engines would make the ship uncontrollable,” the young designer pointed out.

The final design, the VJ-100, has two wings and a single power source in the tail. All the control surfaces are in four tail fins placed in the path of the jet blast. The pilot operates these surfaces with a control stick which can be moved in flight to raise or lower the nose and to turn it right or left. Pressure on foot pedals warps the tail surfaces to give the ship a twisting or banking motion.

The pilot climbs into his cockpit behind the transparent nose of the “rocket ship” and straps himself into place in a standing position beside his copilot-observer while the ship is resting on its tripod tail. During the take-off he and his companion remain upright, keeping the craft poised on the pinnacle of the jet and rocket blast similar to the way you would balance a stick on your finger. When the ship has leveled off, the pilots fly in a prone position which makes them less susceptible to blackouts caused by high speed maneuvering.

In case of an emergency the cockpit, which is really a capsule inside the rocket hull, is catapulted from the rest of the ship. When it has slowed down to bailout speed, the occupants can use conventional parachutes for the rest of their descent.

The VJ-100 lands by backing down. As the ship approaches the landing spot, the pilot pulls the nose up and throttles back on the jet engine to kill excess speed. Then he allows the ship to settle toward the earth tail first, breaking his descent with the blast of the engine and going through his balancing act as on take-off.

This rocketship may be an answer to high-flying enemy bombers and guided missiles. Because it needs only a fifty foot circle for take-off and landing, it will also be valuable as a highspeed reconnaissance plane. Highly mobile units operating in close tactical liaison with ground forces will launch the VJ-100 from advanced positions to obtain latest photographs of enemy installations.

The Hiller rocket is being tested at Wright Field, Ohio. The full-size edition will be 30 feet long and will weigh about 5-1/2 tons. Its inventor estimates its speed will be 650 mph.