Be careful with these inventions. I’m pretty sure that the Palpatron will turn you into a Sith lord. 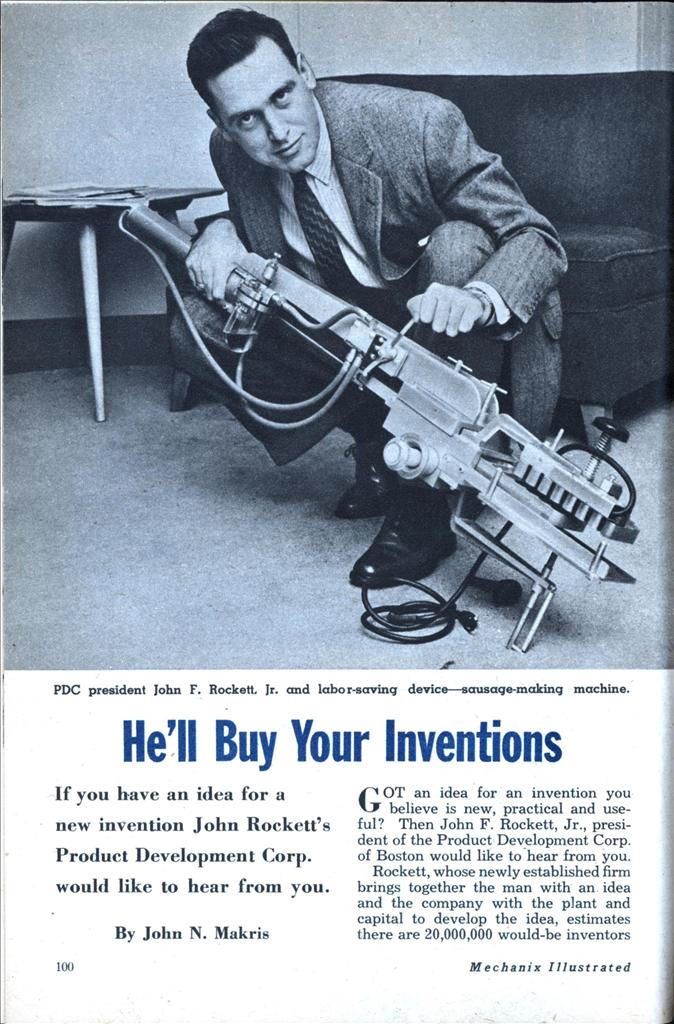 If you have an idea for a new invention John Rockett’s Product Development Corp. would like to hear from you.

GOT an idea for an invention you believe is new, practical and useful? Then John F. Rockett, Jr., president of the Product Development Corp. of Boston would like to hear from you.

Rockett, whose newly established firm brings together the man with an idea and the company with the plant and capital to develop the idea, estimates there are 20,000,000 would-be inventors in the United States, representing an enormous treasury of new products, gadgets and services. But only a small percentage of these, Rockett recognizes, are worthy of commercial development.

An invention, whether a machine or a gadget, must be able to do a faster or better job for less money in its particular field to be of any interest to Rockett. He emphasizes that with new product competition what it is today, the need is for workable ideas that are simple and novel. Rockett wants only practical and original devices that are easy to make and sell.

One such successful idea was conceived by Merton L. Clevett, Jr., a mechanical engineer in the Army’s Quartermaster Corps and part-time inventor. This was a new type self-aligning ground anchor with an attached cable to support power lines, fences, trees, signs, etc.

As it developed, Clevett’s anchor became the most inexpensive device available for supporting loads ranging from 1,000 to 10,000 lbs., especially when the labor-saving installation factor is considered. It can be installed in the ground manually in less than three minutes. For the Malleable Iron Co., of Laconia, N. H., Clevett’s anchor was just what the doctor ordered.

Another manufacturer called on PDC for a product that would make him independent of government contracts. Rockett came up with an electronic pulse detector (Palpatron) that this company was capable of manufacturing. This was Rockett’s own invention, one that is now widely used in hospitals for detecting cardiac symptoms and arresting the possibility of heart failure in a patient during an operation.

Some inventors have manufactured and marketed their ideas but with no great success because of a lack of financial resources. PDC, with its domestic and foreign clients eager for new products, can do a lot with such items.

A recent visitor to PDC offices at 80 Federal Street was Sidney Cohen, a young Newton, Mass., inventor. Cohen liked to putter on the greens, but didn’t like the idea of lugging his heavy golf bag for 18 holes.

Cohen’s thoughts along these lines resulted in the Cadi-Ette, a revolutionary new type of golf carrier capable of holding two to ten golf clubs.

The Cadi-Ette retailed for $3.50. Cohen, through direct mail advertising, sold 10,000 of them over a three-year period. But for a product with such terrific potential, considering the 12,-000,000 golfers in the country, the merchandising of Cadi-Ette left much to be desired. Cohen went to PDC.

Rockett’s vice-president, 28-year-old Lea M. Griswald, a graduate of Harvard Business School, agreed that Cohen’s patented Cadi-Ette was a selling commodity. It was earmarked for a manufacturer dealing in sporting goods—one with financial resources and a promotional setup not available to the individual inventor, who would turn out the Cadi-Ette in volume and thereby reduce the original price. With the problem of merchandising eliminated, PDC estimates that Cohen will receive royalties on an annual sale of at least 30,000 Cadi-Ettes.

Another success story is that of Carl Schwartz of Elkhart, Ind. Schwartz invented a sausage-making machine capable of turning out all kinds of meat patties. This machine, a labor saving device, is now being tested by commercial meat packers of Cleveland before being marketed.

Paul Grindle of New York City conceived the idea of a Copy-Writer, a device adaptable to any office typewriter, that does away with carbon paper yet turns out four carbon copies.

From another inventor came a compact electronic compass for small boats. This was actually a navigation instrument with an entirely new concept for direction steering.

Rockett himself has always liked to tinker with inventions in his spare time. What with 48 patents disclosed or pending, the 28-year-old executive is no novice in the engineering field. Setbacks and obstacles did not discourage him, although they did annoy him because he couldn’t see any valid reason for them. As a result, during the disheartening process of seeking markets for his inventions, Rockett became acutely aware of the gulf between inventors and industry.

It was at this point that the initial idea for PDC came to Rockett; the idea being to close the broad and often hostile gap between inventor and manufacturer with an entirely new working method. This would be accomplished by Rockett setting himself up in the capacity as a clearing house and, although unorthodox but logical, getting the manufacturers to foot the bill. It was the manufacturers with money tied up in production plants who had the most to • gain, theorized the inventive Rockett.

In the past, the individual inventor paid a go-between to get his invention accepted. This was costly and a failure or two often ended the inventor’s creative urge.

With this in mind, Rockett went to the American Research and Development Corp. in Boston with his idea. Their purpose is to analyze new developments and to give financial backing to those ideas which seem most favorable for new business ventures. As a result, ARD&D has invested in over 30 companies, among them Ionics, Inc., Magnecord, Inc., and Tracerlab, Inc.

ARD&D provided the initial capital for Rockett’s company. Recently, however, Rockett was able to buy the investment concern’s interest and establish PDC as an independent enterprise.

Rockett’s staff screens carefully all ideas, which come to his office at the rate of 50 to 60 a day, and debates what manufacturer’s production setup is best suited for the particular product with its inherent possibilities.

After PDC is retained by a company seeking a new product, Rockett, often with vice-president Lea Griswald, goes into the organization and makes an informal but comprehensive survey of the company’s personnel, facilities and markets. Rockett tries to unearth any latent talents they may have in production, engineering or merchandising. From this analysis he learns two important things: 1. What a company can do. 2. What the company cannot do.

Then Rockett returns to his office and gives serious thought as to what type of product or product line the client needs. Next the search begins—first in PDC files, then finding the inventor with the right type of product.

Once a suitable product has been chosen, PDC and the company go to work together to try and figure out the production and merchandising problems. This is part of the overall operation of PDC that has made both manufacturers and inventors extremely happy.

Within two months after its organization, PDC was plowing steadily through black ink. Its client list, from all over the country, has steadily increased. The smallest firm has assets of $50,000 and the largest $3,000,000.

After a protected product goes into production, the inventor collects royalties from the manufacturer—a small percentage of sales. PDC charges its contracted clients a yearly fee of $10,000 plus one per cent, or $5,000 plus two per cent of the sales of the manufactured product from the client. The inventor pays nothing.

If any MI readers have a good invention or an interesting commercial product and would like it to be considered by PDC for possible placement with one of its clients, the first step is for them to send a postcard saying: “I have (describe invention or commercial project) in the following field: Please send instructions for submitting idea to your firm.”

Rockett prefers patented devices but it is not unusual for an inventor to submit an unpatented idea to PDC. If PDC thinks the idea has merit, it urges the inventor to seek patent rights.

Rockett has this advice for MI reader-inventors: “When you find some solution to a problem, the first thing to do is to conceive of the method or device which you will use. Then make sure of its practicality by making a working model which will later lead to a production model.”

Here are a few suggestions for would-be inventors as to what Rockett feels would stand a particularly good chance of succeeding in the fields of invention and gadgetry: Any kind of a product that would apply to the machine tool market, aviation, automotive, home appliances, home workshops, new devices for telling time, new devices for drilling holes, new types of packages and fasteners, new toys, anything for the leisure market (sporting goods, etc.) and any new types of electrical products.

“There is no limit on what is wanted provided the product is sensible and practical,” says Rockett. •