This looks like some kind of Geiger inspired S&M gear. 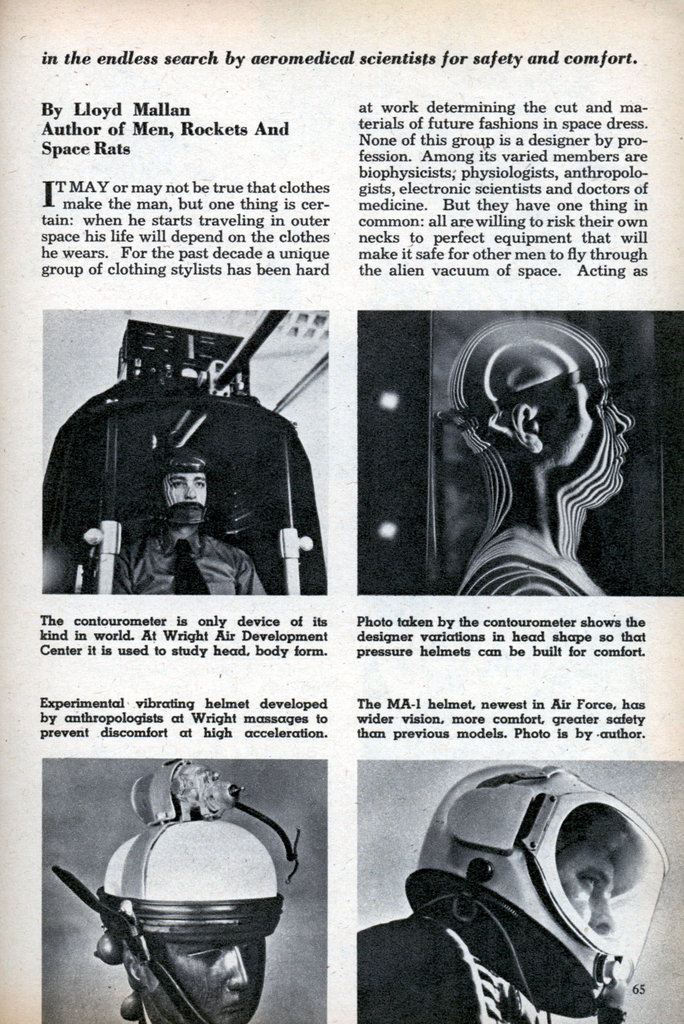 Designers are already working on the styles the well-dressed space man needs to survive.

IT MAY or may not be true that clothes make the man, but one thing is certain: when he starts traveling in outer space his life will depend on the clothes he wears. For the past decade a unique group of clothing stylists has been hard at work determining the cut and materials of future fashions in space dress. None of this group is a designer by profession. Among its varied members are biophysicists; physiologists, anthropologists, electronic scientists and doctors of medicine. But they have one thing in common: all are willing to risk their own necks to perfect equipment that will make it safe for other men to fly through the alien vacuum of space. Acting as their own guinea pigs, they are locked into altitude chambers, spun wildly on centrifuges, and closed up in insulated rooms. In the process, they discover whether or not their space fashions are practical. And in order to be absolutely certain they plunge needles into their veins and spines, under their skin and over their brains. Wires connected to the needles carry their slightest physical reaction.

But out of it all, in just ten years, have come the means to prevent the horrors that could happen in space to the unaccustomed human body. Aeromedical scientists at the Air Force’s Wright Air Development Center (who supplied photos on these pages) now know that man can fly beyond the atmosphere without his tissues exploding, brain hemorrhaging, blood cells dying or lungs collapsing.