I love this question from one of the tests they made up:
“Define the following: Slander, libel, arson, jury, defendant, alias, accomplice, mutiny, oath, malice, search warrant.”

Mutiny? Doesn’t quite fit with the other words, does it? It sounds like some of the other kids decided that they wanted to take over the T.C.D.A and their coup was put down. Now everyone has to take a loyalty pledge to the bossman. 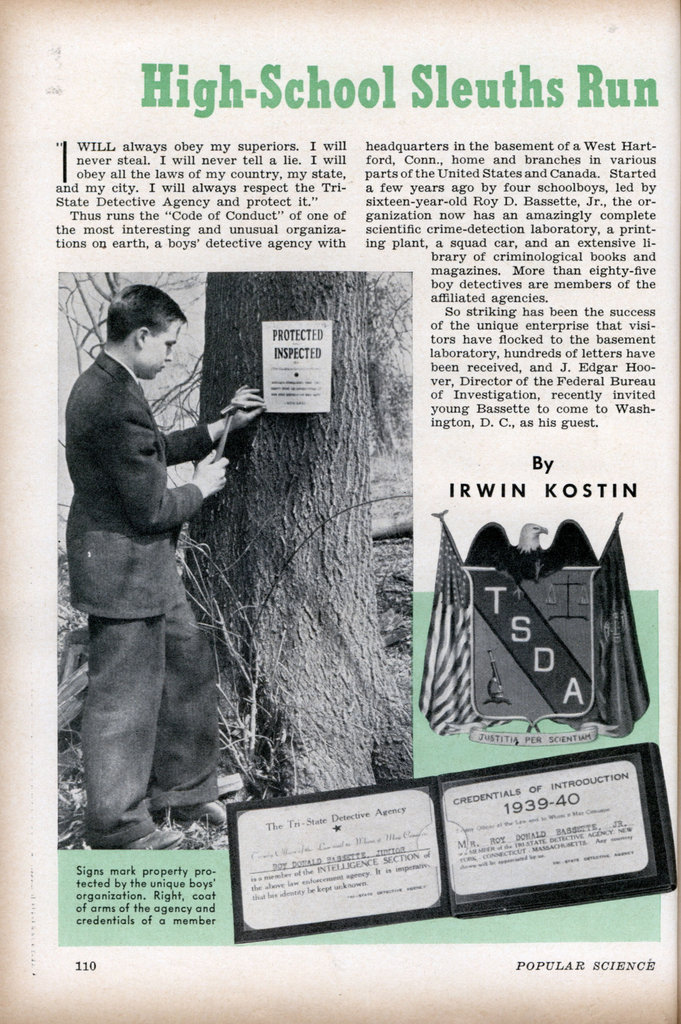 “I WILL always obey my superiors. I will never steal. I will never tell a lie. I will obey all the laws of my country, my state, and my city. I will always respect the Tri-State Detective Agency and protect it.”

Thus runs the “Code of Conduct” of one of the most interesting and unusual organizations on earth, a boys’ detective agency with headquarters in the basement of a West Hartford, Conn., home and branches in various parts of the United States and Canada. Started a few years ago by four schoolboys, led by sixteen-year-old Roy D. Bassette, Jr., the organization now has an amazingly complete scientific crime-detection laboratory, a printing plant, a squad car, and an extensive library of criminological books and magazines. More than eighty-five boy detectives are members of the affiliated agencies.

So striking has been the success of the unique enterprise that visitors have flocked to the basement laboratory, hundreds of letters have been received, and J. Edgar Hoover, Director of the Federal Bureau of Investigation, recently invited young Bassette to come to Washington, D. C, as his guest.

The story of the Tri-State Detective Agency goes back to the fall of 1936. On Halloween night, some one smeared paint on the stone wall facing the Bassette home. Then and there, Roy, who had always been fascinated by police methods and the ways of scientific detectives, determined to form a boys’ detective agency to combat the disfigurement and destruction of property. The three original associate detectives were Don Williams, Henry Jarvis, and Payson Langley. Today, they form the Headquarters Staff of the organization. Each has become an expert in a particular branch of scientific crime detection.

At first, the organization was called simply the Bassette Detective Agency. Roy complained that the name was too “personal” and it was finally decided to change it to the Tri-State Detective Agency. Before this could be done, however, it was necessary to get members in two other states. This proved comparatively easy. Young Bassette had a friend in Massachusetts who was glad to form a branch. Then, Roy drafted his older brother who was in New York City, and thus was able to assume the tri-state title without further ado. Today, a colored map of the United States hangs on one side of the basement laboratory. Red marker pins on it indicate the location of branch agencies in many parts of the country. In addition, there are two branches in Canada and even one in far-away Paris, France.

As your eye runs around the white-walled basement headquarters of this active organization, you see chemicals, microscopes, cameras, enlargers, scientific apparatus of a dozen kinds. This equipment, which provides the youthful sleuths with a G-man laboratory in miniature, has been made possible by Bassette’s father, an architect, who has become greatly interested in the work of the boys.

Ranged on a long wooden table in the center of the room are textbooks on chemistry, manuals on fingerprinting, law books, treatises on poisons, and assorted books on scientific crime detection. Beside them, in neat piles, lie the latest criminological magazines, Federal Bureau of Investigation bulletins, and police reports. In one corner of the laboratory, near a wall blackboard, are posted pictures and descriptions of wanted fugitives. Near-by is a bulletin board holding news clippings relating to the feats of scientific sleuths here and abroad. The blackboard is in frequent use. Diagrams chalked on its surface are used to study various steps in the correct solution of crimes. A projector and a screen also permit images of fingerprints and other material to be enlarged greatly for viewing and study. Part of the equipment of the squad car is a complete and compact kit for making plaster casts of footprints. Professional-type fingerprint outfits are also available for instant use. In spite of the completeness of their scientific equipment, the boy detectives are always on the alert for makeshift emergency methods. For instance, they have learned that they can easily bring out fingerprints by shaving off black dust from a lead pencil and spreading it like fingerprint powder over an area where prints have been left.

While all the members are grounded in the different phases of scientific crime detection, each has specialized in some branch of the work. Young Langley is custodian of the chemistry laboratory, Jarvis is in charge of the fingerprint section, while Williams operates the photographic department. In their work, the schoolboy Sherlocks are unconsciously picking up a foundation knowledge of many kinds of science.

Virtually all the planning and organizing in connection with the Tri-State Detective Agency has been done by the boys themselves. New members have to fill out a questionnaire which asks among other things: “Have you ever destroyed property which did not belong to you? Have you a police record? Have you a good reputation in your community?” The initiates must also swear to the “Code of Conduct” of the agency. All members are strictly forbidden to play detective games with guns, revolvers, knives, or other weapons that might cause injury. For violation of the Code of Conduct, members are liable to suspension for varying periods. One recent rule read: “Any member of the Tri-State Detective Agency damaging property this Halloween will be suspended for life.”

Each member receives a pin and his credentials. Promotion from member to inspector, lieutenant, and captain are made on the basis of written examinations. At the West Hartford headquarters, Bassette holds the title of Chief while Williams and Langley have become captains and Jarvis lieutenant. Among the quiz questions which a candidate for promotion must answer correctly are these:

“What personal qualities should a detective have that are not essential to a policeman or a layman?

“Draw a diagram showing how two men can surround a house.

“What class of criminals usually kill by poison?

“What is the motive behind crimes against property?”

Lesson leaflets which embody such information are sent out to all members of the organization. This material covers a wide range of subjects from the most effective method of taking fingerprints to the best manner of preserving perishable bits of evidence.

When a boy or girlâ€”yes, there are three girl members of the agencyâ€”becomes an officer, he or she receives a badge and certificate. Dues in the organization are one dollar for the first year and fifty cents annually thereafter. Customers, hiring the services of the agency, do so by written contract and notices are posted on the property announcing that it is being protected and inspected by the Tri-State Detective Agency. Rewards are offered by the agency for information leading to the arrest and conviction of anyone damaging property under the protection of the organization. So far, however, it has never been necessary to pay out a reward. The posters and the vigilance of the boy detectives have kept away all intruders.

The members of the organization justly resent being called “kids playing cops and robbers.” They point to ledger books as evidence to the contrary. Recorded on the pages of these books in businesslike fashion are the fees which have been paid to the agency for services rendered. Most of this work, at present, consists of guarding private property from the depredations of marauders.

Recently, so many inquiries have come in that young Bassette and his fellow sleuths have been swamped. The idea which started nearly three years ago, when Halloween pranksters painted a New England stone wall, is spreading rapidly. Out of the beginnings at West Hartford, it seems likely, an important new youth organization, which will offer training in citizenship and law observance, may spread to all parts of the country.