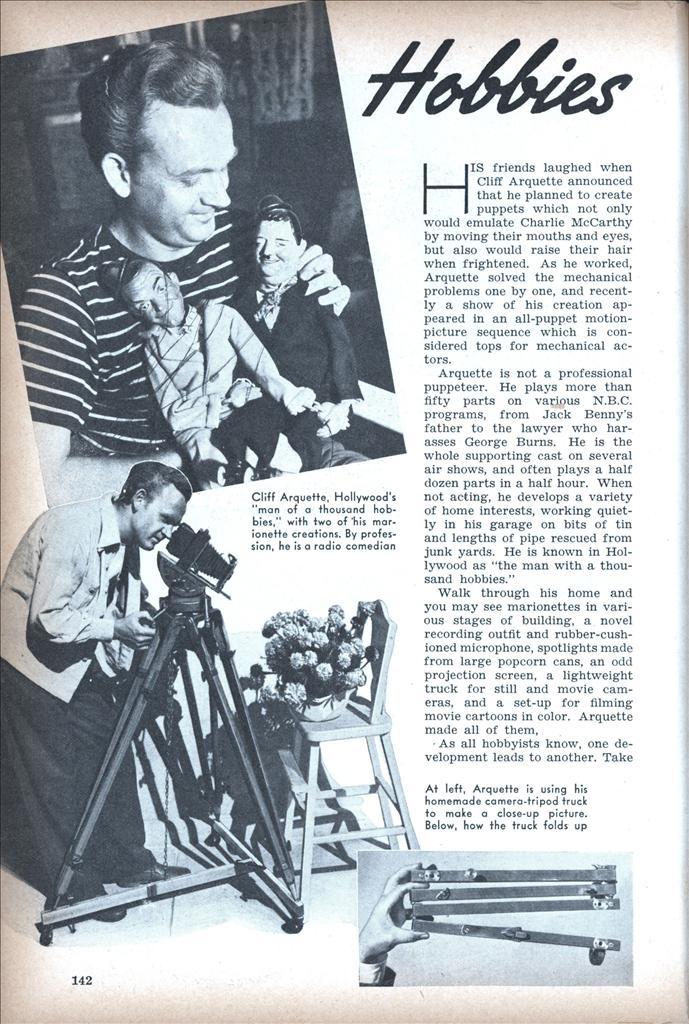 Hobbies Are His Hobby

HIS friends laughed when Cliff Arquette announced that he planned to create puppets which not only would emulate Charlie McCarthy by moving their mouths and eyes, but also would raise their hair when frightened. As he worked, Arquette solved the mechanical problems one by one, and recently a show of his creation appeared in an all-puppet motion-picture sequence which is considered tops for mechanical actors.

Arquette is not a professional puppeteer. He plays more than fifty parts on various N.B.C. programs, from Jack Benny’s father to the lawyer who harasses George Burns. He is the whole supporting cast on several air shows, and often plays a half dozen parts in a half hour. When not acting, he develops a variety of home interests, working quietly in his garage on bits of tin and lengths of pipe rescued from junk yards. He is known in Hollywood as “the man with a thousand hobbies.”

Walk through his home and you may see marionettes in various stages of building, a novel recording outfit and rubber-cushioned microphone, spotlights made from large popcorn cans, an odd projection screen, a lightweight truck for still and movie cameras, and a set-up for filming movie cartoons in color. Arquette made all of them, – As all hobbyists know, one development leads to another. Take the marionettes, for instance. Arquette became interested in puppets five years ago. They must be different, he knew, if his little figures were to receive recognition. So he devised a plan for cutting the bodies six at a time, modeled the heads, and reproduced them in a plastic material. Then he installed movable mouths and eyes, for good measure setting the hair in a skull cap hinged through the head to a spring which could be controlled to make the hair literally stand on end.

“To make sure these little fellows operate properly,” Arquette tells you, “we design them on paper, and follow the drawings in detail.” “We” includes Bob and Bill Jones, two friends. So popular have the marionettes become that Arquette turns them out for his friends.

Primarily a showman, Arquette went on from animated puppets to animation on celluloid. Two years ago he was seeking some way to record the growth of his baby from Christmas to Christmas. But by what novel approach? He hit upon the idea of producing a fantasy in colored pictures.

First he trained a sixteen-millimeter camera on a ball mirror, which both reduced and distorted the baby’s figure. Using this film record as a guide, Arquette made scores of drawings on celluloid, exactly as the professional cartoon makers work. He placed his camera on top of a drill-press stand, adjusted two lights on the sides to avoid reflections from the celluloid sheets, and began shooting.

Every year he adds to his original script, using the cartoon idea to record the baby’s reaction to his Christmas toys. He exposes two frames on each bit of action. By lowering the camera eighteen inches in quarter-inch steps and changing focus three times, he moves in for close-ups, thus making one set of painted “cells” do double duty. At that, he paints 1,500 separate cells for 100 feet of action, shooting at times through six cells of foreground action into background scenery.

This fantasy led to another interesting hobby development. Arquette writes radio scripts. Continuity of the cartoon led him to think he could evaluate his work better if he created an entire program in sound before submitting it to a sponsor. Accordingly, he built a complete recording outfit, assembling a six-stage amplifier, two turntables, recording head, two pickups, a radio receiver, microphone, and boom.

Standing before the microphone for one half-hour show, he recorded a theme song, swung into an announcement, and alternately played the parts of a vocalist, a comedy team, an old lady giving household hints, a guest star (Lionel Barrymore) and a guest conductor (Ben Bernie). At proper spots, he dubbed in music and applause to make the thing even more realistic.

To achieve the best possible reproduction, the playwright-producer-announcer-actor-inventor mounted the dynamic mike in a sponge-rubber-lined tin can. “This arrangement,” he explains, “increases sensitivity and kills live hum and shock.”

ARQUETTE pursues his hobbies with an eye to the future. Recently, while pondering the problems of television, he asked himself: “Where will I fit into talking-pic-tures-on-the-air ? ”

He recognized two hurdles which must be overcomeâ€”quick changes of costume and make-up for the actors, and equally rapid changes of scenery. To step from one costume into another is simple, but to go from youth to old age in seconds presented a more complex problem. He submitted the makeup question to the drawing board, and from his garage came plans for a close-fitting rubber mask, which snaps over the face.

Arquette first models a mask in clay, casts it in moulage, brushes on hot latex in thin layers, and finally tints the cheeks and forehead. He carves in the wrinkles and tints the surface for age effects. Already he has worn such a mask in stage appearances, made up as an elderly female comic. Actors, fitted in advance, can change faces in a few seconds, while the television show fades out and in, according to a novel idea for quick scenery changes that he has worked out.

He bought an oblong piece of glass, thirty-six by forty-two inches, and applied eight coats of liquid transparent cellulose. With the ninth coat, he mixed whiting, which provided a dull surface. When the last coat had dried, he stripped the hardened cellulose film from the glass, punched eyelets through the edges, and mounted it in a wooden frame so that it would serve as a motion-picture screen. Around the center he added four coats of cellulose to diffuse the “hot spot”

that would be thrown from the projector. With this ingenious homemade screen, he proceeded to make “process projection” close-ups, filming the head and shoulders of his wife against a motion picture projected onto the screen from the rear. As hobby No. 1001, Arquette now plans to build a much larger screen, piece together on a thirty-five millimeter film various natural scenes in proper sequence, prepare masks for several changes by a small troupe of actors, and have them ready for a complete show when television tryouts hit Hollywood.

ALL his devices are useful, yet few cost more than a couple of dollars. Two lights used in making photographs, both movie and still, stand on bases which a decade ago were steering wheels in fine automobiles. Cost: fifteen cents each. The stands themselves were music racks, picked up for a dime apiece in a junk store. Beside the stairway you see a shade which swings in all directions on a swivel to shield the lenses of his many cameras from the direct light of the sun or lamps. That shade once shielded pas- sengers in a sedan.

Standing in a corner of the dining room, merging with the walls in both color and form, is a barrel on wheels. When swung around, however, the barrel reveals itself as a miniature three-tier bar, with room for twelve glasses and eight bottles. Arquette started with a three-ply packing barrel, sawed out one side to form a “U,” added shelves, bound the top with copper weather-stripping, decorated it with large-headed upholsterers’ nails, and mounted the fixture on four casters.

Whenever he needs some new device in a hobby he builds it. Not long ago he was taking pictures in his garden, and was having trouble moving his tripod. Two weeks later he rolled his camera down the driveway on a collapsible truck, which resembles a “T” when open, but folds up into a small package. Weighing only a pound and a half, it will support the weight of his heaviest movie camera. By punching a button brake with his foot, he easily locks it in place.

Pursuing a thousand hobbies is Arquette’s first interest in life. With them he not only has a lot of fun in his spare time, but tries to keep a step ahead in his profession. No useless trinkets clutter his workbench. “Unless they serve a good purpose, I don’t want them,” he saysâ€”which is pretty good advice for any hobbyist.