UPDATE: Somone on digg pointed out that if you look closely at the picture of the father and son filling a model Zeppelin on page two you can see that it says “Hindenburg” on the side. 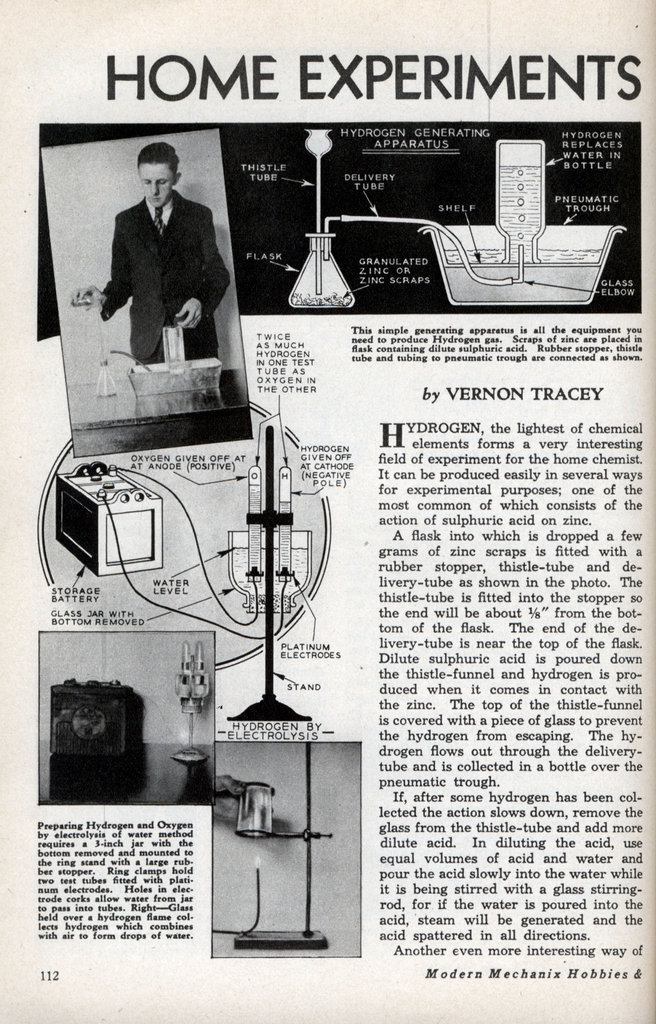 HYDROGEN, the lightest of chemical elements forms a very interesting field of experiment for the home chemist. It can be produced easily in several ways for experimental purposes; one of the most common of which consists of the action of sulphuric acid on zinc.

A flask into which is dropped a few grams of zinc scraps is fitted with a rubber stopper, thistle-tube and delivery-tube as shown in the photo. The thistle-tube is fitted into the stopper so the end will be about 1/8″ from the bottom of the flask. The end of the delivery-tube is near the top of the flask. Dilute sulphuric acid is poured down the thistle-funnel and hydrogen is produced when it comes in contact with the zinc. The top of the thistle-funnel is covered with a piece of glass to prevent the hydrogen from escaping. The hydrogen flows out through the delivery-tube and is collected in a bottle over the pneumatic trough.

If, after some hydrogen has been collected the action slows down, remove the glass from the thistle-tube and add more dilute acid. In diluting the acid, use equal volumes of acid and water and pour the acid slowly into the water while it is being stirred with a glass stirring-rod, for if the water is poured into the acid, steam will be generated and the acid spattered in all directions.

Another even more interesting way of producing hydrogen is by the electrolysis of waterâ€”that is using electricity to break water up into its elementsâ€”hydrogen and oxygen. Hydrogen and oxygen are both produced by this experiment and are collected separately.

Fit up a glass vessel on a metal stand as shown in the drawing, fill vessel and test-tubes with acidulated water and support the test-tubes in an inverted position so their open ends will be under water and over the electrodes. Connect the battery and the hydrogen will collect at the cathode, rise up and displace the water in the test-tube. Oxygen will collect in a similar manner over the anode. Because water is composed of two parts of hydrogen to two parts of oxygen, there will be twice as much hydrogen in one tube as there is oxygen in the other. After the hydrogen tube is full, remove it and place it upright in a test-tube rack with a piece of glass over its mouth to keep the gas from escaping. Collect another tube of hydrogen, and by this time the other test-tube will be full of oxygen.

Wrap a towel around a test-tube of hydrogen and holding it mouth down, bring a lighted match up to it. The hydrogen will burn with a pale-blue flame as it leaves the test-tube. Thrust the match up into the test-tube and it will appear to go out, but as soon as it is removed it will flame up again.

Hydrogen burns to form water. This can be demonstrated by burning a jet of hydrogen and collecting the water-vapor given off. To do thisâ€” make a right-angle bend in a piece of copper tubing and mount it on a ringstand.

Loosely pack the top end of the tube with steel-wool to prevent the flame from following the tube back to the generator. Connect the rubber tube from the generator onto the bottom end of the copper pipe and light the hydrogen issuing from the top. If a cold dry glass is supported over the flame, the vapor will condense forming water droplets on the inside of the glass.

Hydrogen and oxygen combine in the proportion of two parts of the former to one part of the latter to form water. They combine however in equal proportions to form hydrogen peroxideâ€”a well known disinfectant. Oxygen is responsible for the disinfecting properties of this compound. Hydrogen peroxide being a very unstable compound breaks down into water and oxygen when applied to a wound, or even exposed to bright light; thus the necessity for keeping it in dark colored bottles. One oxygen atom remains in combination with the two hydrogens (water), the liberated oxygen atom is very active and destroys bacteria. The amateur can have fair results in preparing hydrogen peroxide by treating barium dioxide with dilute sulphuric acid. A dilute acid composed of three parts of water to one part of acid is added to the manganese dioxide. The milky liquid is then filtered and collected in a flask as shown in the photo.