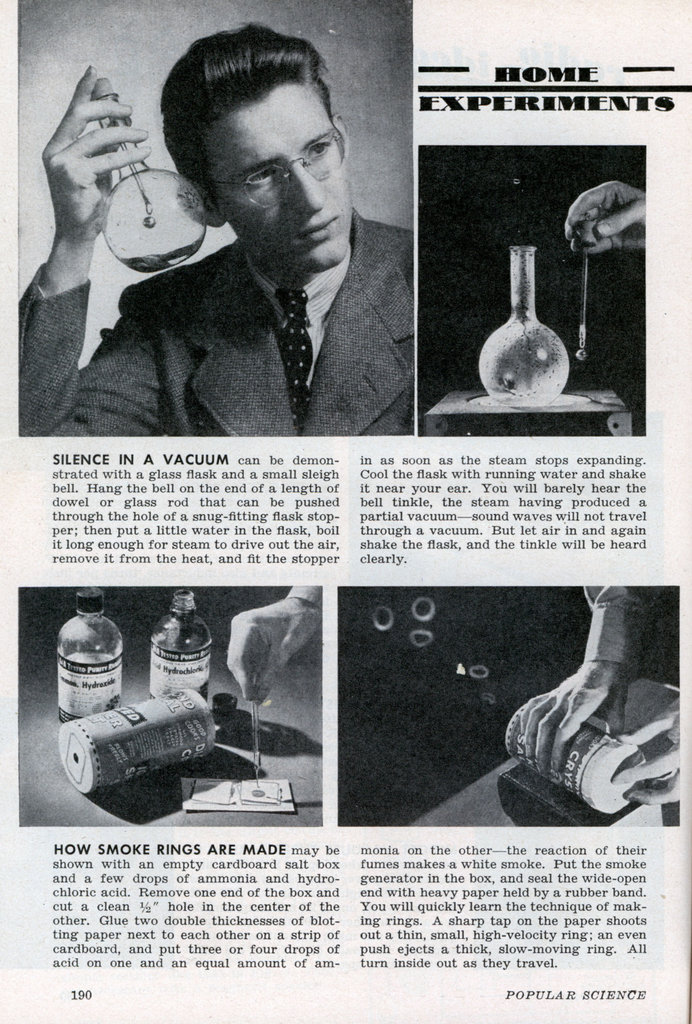 SILENCE IN A VACUUM can be demonstrated with a glass flask and a small sleigh bell. Hang the bell on the end of a length of dowel or glass rod that can be pushed through the hole of a snug-fitting flask stopper; then put a little water in the flask, boil it long enough for steam to drive out the air, remove it from the heat, and fit the stopper in as soon as the steam stops expanding. Cool the flask with running water and shake it near your ear. You will barely hear the bell tinkle, the steam having produced a partial vacuumâ€”sound waves will not travel through a vacuum. But let air in and again shake the flask, and the tinkle will be heard clearly.

HOW SMOKE RINGS ARE MADE may be shown with an empty cardboard salt box and a few drops of ammonia and hydrochloric acid. Remove one end of the box and cut a clean 1/2″ hole in the center of the other. Glue two double thicknesses of blotting paper next to each other on a strip of cardboard, and put three or four drops of acid on one and an equal amount of ammonia on the otherâ€”the reaction of their fumes makes a white smoke. Put the smoke generator in the box, and seal the wide-open end with heavy paper held by a rubber band. You will quickly learn the technique of making rings. A sharp tap on the paper shoots out a thin, small, high-velocity ring; an even push ejects a thick, slow-moving ring. All turn inside out as they travel.

THIS NOVELTY MOTOR is made with a bar magnet and a box top partly filled with mercury and supported on a tumbler. Suspend copper wire from the hooked end of a stiff wire bent as shown and attached to one pole of a dry cell. Dip a wire from the other pole into the mercury. Repelled, the suspended wire spins around the magnet; reverse connections, and it spins the other way.

CAR-DISTRIBUTOR ACTION can be demonstrated with a rotating switch wired, as below, to Christmas-tree bulbs representing spark plugs. On a car, the brush makes one revolution for two of the crankshaft, firing a plug as it touches each stationary contact point. A common sequence of firing for a four-cylinder engine is 1, 3, 4, 2.

GLASS WILL DISAPPEAR when immersed in a liquid, even a clear liquid, that has its same index of refraction. Ordinarily glass is seen because it reflects light from its surfaces and light is refracted within it. The amount the light is refracted is its index of refraction. Tetrachlorethylene, a dry-cleaning fluid, is one liquid that blends so perfectly with glass that glass covered by it can’t be seen. Chlorobenzene is another. For a demonstration, put a small glass in clear water and another in one of these liquids.