This is a pretty cool house, if you go for the woodland-critter, industrial-flintstones look. As far as I can tell the only real feature it has that is in any way associated with “atomic protection” is the bomb shelter. However, the fact that the bomb shelter must be entered by swimming through a tunnel in the pool gets them major James Bond points.
Oh, and am I the only one who would be terrified to try parking on that crazy cantilevered track thing? 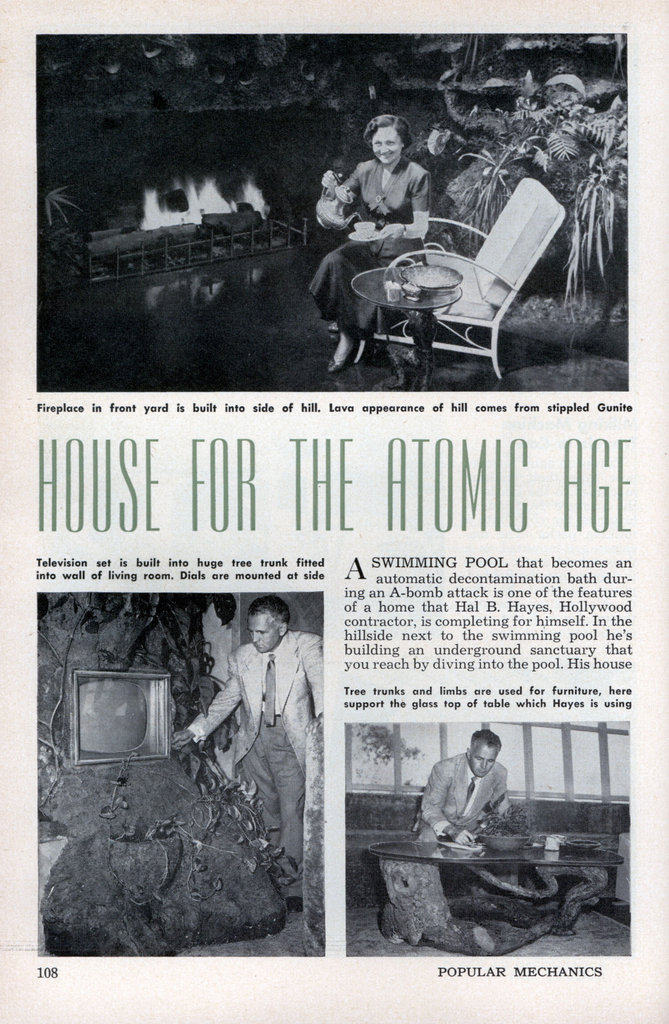 HOUSE FOR THE ATOMIC AGE

A swimming pool that becomes an automatic decontamination bath during an A-bomb attack is one of the features of a home that Hal B. Hayes, Hollywood contractor, is completing for himself. In the hillside next to the swimming pool he’s building an underground sanctuary that you reach by diving into the pool. His house is designed to “bring the outdoors indoors” for ordinary peaceful living, yet has a structure built to resist great destructive forces. Several of the walls are completely of glass that would be swept away by a powerful shock wave, but could later be replaced. A continuation of his living-room rug is pulled up to shroud the glass wall in that room when a button is pressed.

Other walls of the house have a fluted design to resist shock wave and a fireproof exterior surface of Gunite.

A garden growing in half a foot of soil on the flat roof provides insulation against extreme heat or shock. All exposed wood, inside and outside of the house, is fire-resistant redwood coated with fire-retarding paint. In addition to the underground sanctuary, equipped with bottled oxygen, there is a bombproof shelter in the house itself, consisting of a large steel-and-con-crete vault containing a sitting room and bathroom. Other features of the home include a three-story indoor tree. * * *