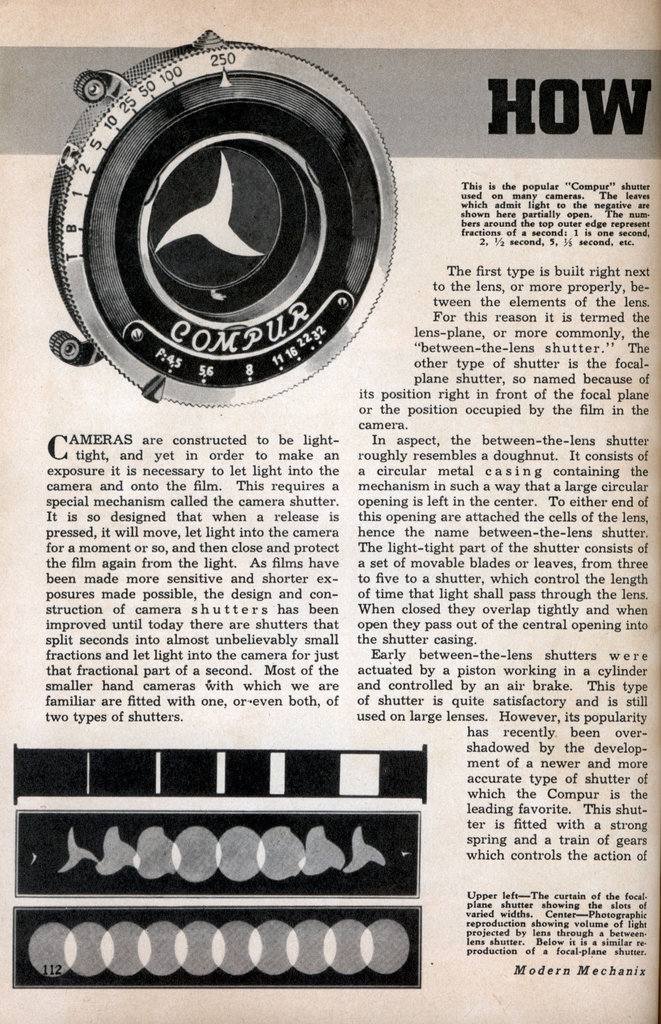 CAMERAS are constructed to be light-tight, and yet in order to make an exposure it is necessary to let light into the camera and onto the film. This requires a special mechanism called the camera shutter. It is so designed that when a release is pressed, it will move, let light into the camera for a moment or so, and then close and protect the film again from the light. As films have been made more sensitive and shorter exposures made possible, the design and construction of camera shutters has been improved until today there are shutters that split seconds into almost unbelievably small fractions and let light into the camera for just that fractional part of a second. Most of the smaller hand cameras with which we are familiar are fitted with one, or even both, of two types of shutters.

The first type is built right next to the lens, or more properly, between the elements of the lens. For this reason it is termed the lens-plane, or more commonly, the “between-the-lens shutter.” The other type of shutter is the focal-plane shutter, so named because of its position right in front of the focal plane or the position occupied by the film in the camera.

In aspect, the between-the-lens shutter roughly resembles a doughnut. It consists of a circular metal casing containing the mechanism in such a way that a large circular opening is left in the center. To either end of this opening are attached the cells of the lens, hence the name between-the-lens shutter. The light-tight part of the shutter consists of a set of movable blades or leaves, from three to five to a shutter, which control the length of time that light shall pass through the lens. When closed they overlap tightly and when open they pass out of the central opening into the shutter casing.

Early between-the-lens shutters were actuated by a piston working in a cylinder and controlled by an air brake. This type of shutter is quite satisfactory and is still used on large lenses. However, its popularity has recently been overshadowed by the development of a newer and more accurate type of shutter of which the Compur is the leading favorite. This shutter is fitted with a strong spring and a train of gears which controls the action of shutter leaves. In some instances this mechanism is so finely adjusted that the leaves open and close in 1/500 of a second. In the newer rim-set Compur shutter, there is an additional set of gears providing a built-in self-timer which delays the actuating of the shutter for approximately twelve seconds after its release.

The shutter casing also contains another set of much smaller leaves which do not close entirely, but which can be moved to produce circular openings of different sizes. These are the leaves of the iris diaphragm, so named because of the similarity of its action and function to the iris of the eye. It will thus be seen that while the shutter leaves control the length of time that light can enter the camera, the diaphragm leaves control the amount of light that can pass through the lens when the shutter leaves are open.

When the between-the-lens shutter is tripped or released the leaves must open from the center, allowing light to pass through that part of the lens first, then through the entire lens, and finally through just the center as the leaves close. Yet to stop the motion of the image moving across the film, the total exposure period, or the time elapsing from the instant the shutter leaves start to open until they close, must not be any greater than the time to which the control dial is set. For instance, if the shutter is set for 1/200 of a second, the leaves must open and close in that time. It can be seen that a certain percentage of that time will be consumed by the opening and closing of the leaves, so that light will pass through the entire lens for only a portion of the 1/200 part of a second for which it is set. The advantages of the between-the-lens shutter lie in its relatively compact size, its position on the lens, and the ease with which it may be synchronized with Photoflash lamps.

The focal plane shutter in its simplest form, as it appears in the Graflex, Speed Graphic and some of the better grade “miniature” cameras, consists of a long curtain or roller-blind. Across this curtain are openings or slots of different widths. When the shutter mechanism is released a slot passes across the film at the back of the camera and light entering the lens can pass through to the film. If the slot is narrow the length of time it will take to pass across any point on the film will be shorter than when a

wide slot is used. The focal-plane shutter thus exposes a single point on the film, not the entire film, for the time of exposure for which the shutter is set. In addition to the different slots producing different speeds, it is possible to increase the tension on the spring actuating the take-up roller at the bottom of the camera. This will cause the curtain to wind up faster and the same slots to move more rapidly, producing faster shutter speeds since the film will be exposed for a shorter time. The shutters on the Graflex cameras have four small slots and six tensions, producing a combination of twenty-four shutter speeds. A fifth slot, as large as the back of the camera, is used for time exposures.

The focal-plane shutter, situated at the back of the camera near the film, is entirely independent of the lens and, as a matter of fact, permits lenses to be interchanged when the camera is loaded with film. With this type of shutter the container for the lens cells can be smaller. It is called a lens barrel and usually, although not always, contains the iris diaphragm leaves, hence the term “in barrel with iris diaphragm.”

Since the opening in the focal-plane shutter passes just in front of the film, light from the entire lens can reach the film during the total duration of the exposure. Because of the masking of part of the lens by the leaves of the between-the-lens shutter during a portion of the exposure, tests indicate that a focal-plane shutter, when set to the same high speed, allows approximately one-third more light to reach the film. This is the basis of the claim of the one-third added efficiency of the focal-plane shutter. This added efficiency is quite necessary in speed photography when the diaphragm leaves should be closed as much as possible to increase the depth of field, and is also of importance in making any photograph when light is poor and but a very little more exposure will make a printable negative and thus save the day.

At the present time, although the focal-plane shutters of the smaller cameras can be equipped with an accessory for flash synchronization, the focal-plane shutters of the lirger camera cannot be synchronized with flash lamps. It is for this reason that press and commercial photographers, in selecting a camera with a focal-plane shutter, so necessary for speed photography, also equip it with a between-the-lens shutter. This shutter additionally provides instantaneous speeds as slow as one full second. In the past, the Compur shutters without self-timer have been more satisfactorily synchronized with flash lamps. However, these accessories are now being sufficiently adjusted so that synchronization will be satisfactory in either instance.